With little progress in post-war negotiations over an array of areas, a new report by the International Crisis Group warned Armenia and Azerbaijan could resume hostilities. On May 14, Armenia’s parliament issued a statement on a ‘crisis situation in its border districts’ relating to its non-demarcated and undelimited border with Azerbaijan. 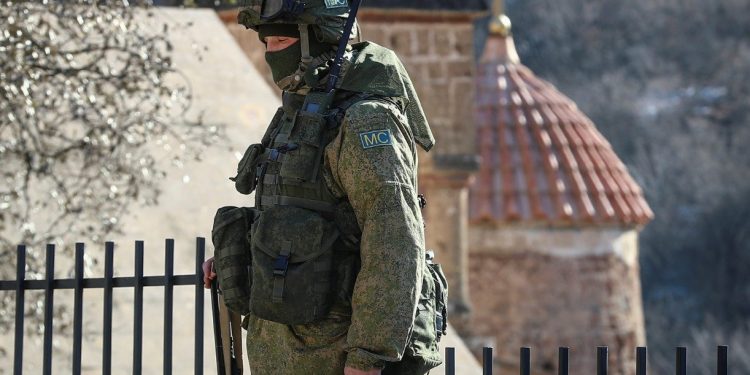 Russia has accumulated five incompatible hats in the South Caucasus and Karabakh conflict. In the event of a renewed crisis or resumption of hostilities, the incompatibility of Russia’s five hats would lead to a crisis in the South Caucasus that would drag in Turkey, which on June 15, Turkish and Azerbaijani presidents signed the Shusha Declaration About an Alliance, which cemented bilateral security ties between the two countries.

Russia’s first hat is the leader of the Collective Security Treaty Organization (CSTO) which Russia created in the early 1990s as a kind of NATO for Commonwealth of Independent States (CIS) countries, and of which Armenia was a founding member. Besides Armenia and Russia, the CSTO includes Belarus, Kazakhstan, Kyrgyzstan, and Tajikistan. Armenia is also a member of the Eurasian Economic Union, Russia’s answer to the EU.

Armenia was frustrated by the CSTO’s unwillingness to intervene on its side in the 2020 Second Karabakh War. The Kremlin justified its inaction by saying that the war was being fought on territory internationally recognized as belonging to Azerbaijan (Yerevan contests this when relating to Karabakh). Armenia fired long-range rockets, including Iskander missiles, into Azerbaijan in the hope of provoking a counter delivery of missiles into Armenia. Thankfully, Baku did not take the bait.

Armenia continues to pressure Russia via the CSTO in response to recent border clashes. Yerevan is activating Article 2 of the CSTO’s charter to ‘launch the mechanism of joint consultations’ on a collective response to threats faced by members. Article 4, which is yet to be triggered, would request the CSTO’s military intervention, although where and how is impossible to comprehend.

Russia is reluctant to involve the CSTO because if it did it would be in direct conflict with its other four hats in Karabakh and the South Caucasus.

Russia’s second hat is its two military bases in Armenia which were established in the Soviet era and 1990s. The Russian 102nd military base in Gyumri, 120 km north of Yerevan, part of Russia’s Southern Command, is a continuation of the Soviet 127th Motor Rifle Division of the Soviet Seventh Guards Army. In the USSR it was part of the Transcaucasian Group of Forces.

A new base at Erebuni Airport, 7 km south of Yerevan, is home to the Russian 3624th Air Base hosting MIG-29s fighters and Mi-24 attack helicopters. These two bases are Russia’s only military bases in the South Caucasus. Pro-NATO Georgia and non-aligned Azerbaijan have always opposed hosting Russian military bases.

Russia’s third hat is its role as Armenia’s main supplier of weapons and military training. Armenia has a population a third the size of Azerbaijan’s and without its energy sources. It does not have the financial resources to purchase Western and Israeli military equipment. Azerbaijan’s military relationship with Israel, including the purchase of its drones, has taken place over a far longer period of time than that with Turkey whose security policy only became more assertive in the last five years.

President Ilham Aliyev reacted with incredulity when Russia announced it would assist Armenia in the ‘modernization’ of its armed forces following its defeat last year. During last year’s war, Armenia’s late twentieth-century Soviet/Russian weaponry and training proved to be far inferior to Azerbaijan’s twenty-first-century weaponry and Turkish-supplied NATO standards training for its officers.

Russia has not provided answers demanded by Aliyev about how Armenia came into possession of its Iskander missiles. One reason is Moscow’s embarrassment at how the Israeli-produced Barak 8 air defense system operated by Azerbaijan successfully brought down Iskanders fired from Armenia.

Baku is suspicious of who fired the Iskanders from Armenia. The technical skills required to fire the Iskander missile coupled with their high profile importance to Russia’s military prestige most likely point to Russian personnel operating or overseeing the firing of the technically advanced Iskanders.

In July 2014, BUK surface-to-air missiles were brought into Ukraine to counter Ukrainian air superiority against Russian proxy forces in the Donbas. A BUK missile shot down Malaysian airliner MH17 killing 298 passengers and crew. Investigations of the incident show the BUK was operated by the 53rd Anti-Aircraft Missile Brigade, part of the 20th Guards Army based at Kursk since the early 1990s. BUKs were too technically advanced for local Russian proxies in the Donbas to operate. Ironically, the 53rd Anti-Aircraft Missile Brigade was formed in 1967 from an anti-aircraft regiment in Soviet Armenia.

Russia’s fourth hat is the provision of 2,000 ‘peacekeeping’ forces in northern Karabakh, the only region not retaken by Azerbaijani forces in last year’s war. The ICG warned that Russian peacekeeping forces should be given clear ‘rules of engagement.’ These would be especially important in the event of the resumption of hostilities between Armenia and Azerbaijan.

Russian ‘peacekeeping’ forces and Armenia’s proxy forces in Karabakh have a symbiotic relationship. Armenia is strongly opposed to the withdrawal of these proxy forces and Russia is not pressuring them to leave.

Russia’s ‘peacekeeping’ mandate comes with decades of negative baggage from unfulfilled ‘peacekeeping’ operations elsewhere in the post-Soviet region where Russia has never sought to resolve conflicts. Russia has a vested interest is in these conflicts continuing to simmer, thereby providing it with a rationale to remain as ‘peacekeepers’ – as in Georgia’s regions of South Ossetia and Abkhazia.

Russia has always opposed the UN, OSCE, and other international organizations undertaking peacekeeping operations in the post-Soviet space, believing Eurasia to be its exclusive sphere of influence. Hegemonic influence over Eurasia is how Russia understands itself as a great power.

Russia’s fifth hat is a replication of its full spectrum warfare in eastern Ukraine since 2014. Armenia is not implementing the ceasefire agreement relating to the withdrawal of its proxy forces from North Karabakh. Armenia continues to supply military equipment and rotate its military personnel through the ‘Lachin Corridor’, with Russian connivance, to its proxies in North Karabakh.

Russia is turning a blind eye and thereby facilitating, the transfer of military assistance from Armenia to its proxy forces in northern Karabakh using civilian transportation trucks as it has been using in eastern Ukraine since 2014. Armenian ‘construction’ supplies to northern Karabakh and Russian ‘humanitarian’ supplies to the Donbas conceal the delivery of military equipment and personnel for Armenian and Russian proxy forces respectively.

On March 1, Azerbaijan’s Foreign Minister Jeyhun Bayramov warned at the UN ‘According to credible information available to the Azerbaijani side, which is also validated by the reports of independent mass media sources, members of the Armed Forces of Armenia, wearing civilian attire, are transferred to the territory of Azerbaijan through the ‘Lachin Corridor’ in civilian trucks, including disguised inside construction cargo, in an attempt to escape the control procedures of the Russian peacekeeping contingent.’

In addition, visits of Armenian politicians and government officials to the Armenian-controlled Karabakh enclave are undertaken without first requesting permission from the Azerbaijani authorities. These visits greatly increased during Armenia’s June 20 election campaign.

At the heart of this military and political activity is Armenia’s refusal to accept the outcome of last year’s war, the imperative need to demarcate and delimit its border with Azerbaijan and accept all of Karabakh is internationally recognized as sovereign Azerbaijani territory. Armenia protested about President Recep T. Erdogan’s recent visit to the ‘currently occupied city of Shushi of Artsakh Republic’.

Armenia’s diplomats, officials, and politicians continue to campaign for international recognition of the ‘sovereignty’ (understood by Yerevan as independence) for Nagorno-Karabakh, called ‘Artsakh’ by Armenians. Former Armenian foreign minister Vardan Oskanyan said ‘the achievement of the rights of the people of Nagorno-Karabakh to sovereignty on their land remains the chief task of the foreign policy of Armenia.’

The South Caucasus incorporates the incompatibility of Russia’s five hats, with Armenia continuing to live in denial about the consequences of last year’s war and Azerbaijan frustrated at the slow pace of the implementation of the ceasefire agreement. This combustible mix is likely to bring a crisis down the road.

Taras Kuzio is a professor in political science, based at the National University of Kyiv Mohyla Academy and a Non-Resident Fellow, Foreign Policy Institute, Johns Hopkins University.