What is Pashinyan serving under a dressing of “territorial integrity of Azerbaijan”?

The consequences of the 44-day war that led Armenia to total surrender, as well as the new strategic realities in the region, gave independent observers every reason to believe that official Yerevan understands that it had no real alternative to peace with Azerbaijan. 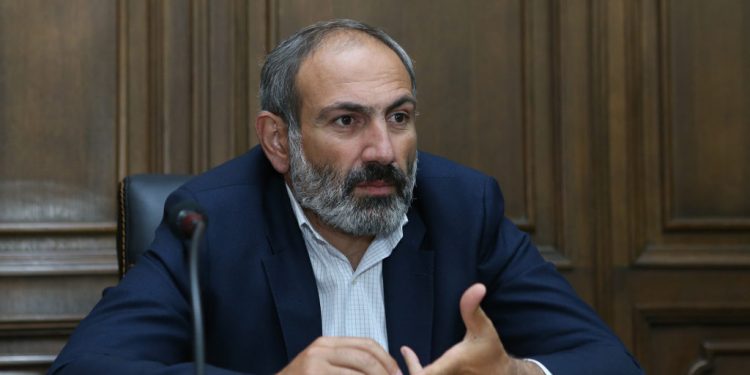 Regrettably, Armenia keeps turning a deaf ear to the calls to finally start negotiations on a permanent peace, which official Baku has been persistently reiterating for more than a year, while also stressing that Azerbaijan’s patience is not infinite.

As we know, the main prerequisite for initiating peace negotiations, including the process of delimitation, enshrined in international diplomatic practice, is mutual recognition of each other’s territorial integrity and exchange of diplomatic notes.

Instead, the Armenian leadership continues to demonstrate contradictory and, at times, simply inadequate approaches to the issue.

For example, Prime Minister Nikol Pashinyan routinely confirms in his statements Armenia’s readiness to start negotiations with Azerbaijan both on the delimitation of the border and on the peace treaty. He also openly acknowledges that a peace treaty with Azerbaijan is of vital importance to Armenia. But whenever it comes to making the first step towards peace and mutually recognizing two states’ territorial integrity, Pashinyan immediately says that Armenia and Azerbaijan already did that thirty years ago, in 1991.

What does Pashinyan mean? What document is he referring to? How did Armenia manage to sign such a document in 1991, in the midst of the Karabakh war? And even assuming it exists, why did Armenia not stop the war, but continued to keep Azerbaijan’s territories under occupation?

Pashinyan refers to the 1991 Almaty Declaration on the Goals and Principles of the Commonwealth of Independent States (CIS), which indeed stated that Azerbaijan and Armenia recognize each other’s borders. However, according to the same Almaty document, “the Nagorno-Karabakh issue” remained unresolved at that time. In other words, Pashinyan claims that Armenia recognized the territorial integrity of Azerbaijan long ago, but… without Nagorno-Karabakh!

Interestingly, Pashinyan’s “trump card”, which is essentially a speculative interpretation of international law, is not taken seriously even in Armenia itself.

We took a closer look at the text of the Almaty Declaration, which seems to be Pashinyan’s last hope.

Declaring in general terms the inviolability of borders and mutual respect for the CIS states’ territorial integrity, the document was signed not only by Azerbaijan and Armenia, but also by representatives of all post-Soviet republics, except Georgia and the Baltic states. Moreover, as Pashinyan himself says, Armenia recognized in this document (albeit indirectly) the internationally recognized borders of Azerbaijan. Pashinyan discretely omits the fact that Armenia violated its own commitments by occupying seven districts of Azerbaijan.

One should recall that Armenia attempted to address the issue of the territorial integrity of Azerbaijan separately from the Nagorno-Karabakh region in the past as well. Former leaders of this country, for example, argued that after the collapse of the USSR the Nagorno-Karabakh Autonomous Oblast, similar to Azerbaijan and Armenia, “exercised its right to self-determination” and therefore this region “has never been part of the present-day Republic of Azerbaijan”.

Today, referring to the Almaty Declaration of the CIS members, Nikol Pashinyan is once again trying to sell to the world community this demagogic interpretation which has neither legal force nor any logical basis.

We would like to remind the Prime Minister of Armenia (although he undoubtedly knows this even without our legal advice) that when a state becomes a member of the United Nations, according to the standards of international law, its borders are officially recognized a priori.

So, when Azerbaijan was admitted to the UN in 1992, Nagorno-Karabakh was considered an integral part of its territory. And in 1993, UN Security Council resolutions 853, 874 and 884, adopted regarding the former conflict, explicitly used the expression “the Nagorny Karabakh region of the Azerbaijani Republic”.

The UN Security Council is the supreme body in international relations, and it is its decisions that should guide political and legal analysis.

If we continue to analyze not the demagogic but the legal framework of the former conflict, we should pay attention to such an important document as the declaration of the 1996 OSCE Lisbon Summit that unequivocally recognized Nagorno-Karabakh as an integral part of Azerbaijan. The Charter for European Security, adopted at the 1999 OSCE Istanbul Summit, also emphasized the principle of territorial integrity. Later on, practically all international organizations adopted dozens of official documents acknowledging Karabakh as part of Azerbaijan.

Thus, any attempt by the Armenian leadership to find or revive international documents, resolutions or statements that treat the former Nagorno-Karabakh region in isolation from the Republic of Azerbaijan, or question the territorial integrity of Azerbaijan, is an absurd, counterproductive and, in a way, dangerous undertaking.

The practice of endlessly dragging out the situation and muddling the main agenda clearly demonstrates the unwillingness of the Armenian leadership to accept the reality that emerged in the region after the victorious 44-day war.

We should also add that all CIS states that signed the Almaty Statement in 1991, , except, of course, Armenia itself, have repeatedly stated that the former Nagorno-Karabakh region is the territory of Azerbaijan, thereby supporting the territorial integrity of our country.

For example, Russian President Vladimir Putin explained in an interview with Russia 1 after the signing of the Trilateral Statement of November 10, 2020, why the CSTO had not helped Armenia in the 44-day war.

“According to international law, the Nagorno-Karabakh region is part of the Republic of Azerbaijan. Nagorno-Karabakh is an integral part of Azerbaijan, so there was no legal basis for Russia’s direct intervention in the conflict. The CSTO can come to Armenia’s aid only in case of a conflict in its territory.”

These facts clearly prove that Prime Minister Pashinyan’s attempts to reinterpret the trilateral statement of November 10, 2020, to question whether Karabakh and Eastern Zangezur belong to Azerbaijan, and to impose his own agenda for the negotiations have no legal basis and are a political gamble of very dubious nature. The sooner Armenia accepts the new reality and renounces its territorial claims against Azerbaijan (indicating that through an official diplomatic procedure), the sooner Pashinyan stops juggling diplomatic terms and starts behaving responsibly, the better for his country.

According to its leader and Supreme Commander-in-Chief, for more than a year, Azerbaijan, the victorious country, has been patiently urging its opponent, the country that was completely defeated and officially surrendered, to pursue peace and good neighborliness in the region. But if Armenia still wants to live in a state of war with inevitable consequences for its people and its army, that will be its choice, its fate.

Nikol Pashinyan and his patrons should understand once and for all: the armed conflict is over, all the i’s have been dotted, the territorial unit called “Nagorno-Karabakh” no longer exists, but there are the Karabakh and East-Zangezur economic regions established by presidential decree. It is up to Armenia what the South Caucasus will be in the foreseeable future: a peaceful and economically thriving region, or another fire-ravaged battleground.