Why Israel must continue to support Azerbaijan

The article accused Israel falsely of “being an accomplice to war crimes,” demonizing both Israel and Azerbaijan. No one can compare Azerbaijan to Hezbollah or Hamas. 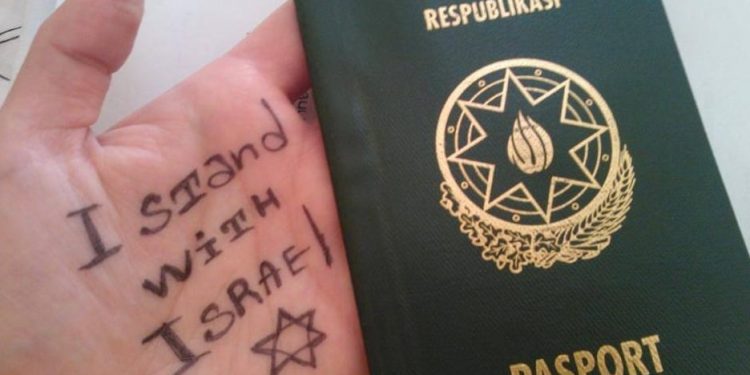 Azerbaijan is one of the few Muslim nations whose people proudly wave Israeli flags and view the Jewish state positively. (Photo: StandWithUs)

As we speak, the State of Israel is blossoming in the Middle East, having made peace with the United Arab Emirates, Bahrain, Morocco, and Sudan. As a result, there is now great potential for rapprochement between Israel and Turkey, and Israel’s friendly relations with Azerbaijan could be the key to better ties between Turkey and Israel.

It is therefore a pity that Foreign Minister Yair Lapid decided to hold a telephone conversation on November 24 with Armenian Foreign Minister Ararat Mirzoyan in which Lapid was updated on “the results of the Azeri aggression against the Republic of Armenia.” It goes without saying that the Azerbaijani government is following with concern this new direction of the foreign policy of its friend Israel.

Earlier this year, there were indications that Azerbaijan would be willing to host a trilateral conference between Turkey and Israel, after Azerbaijani presidential aide Hikmet Aliyev stated: “Turkey is a sister country of Azerbaijan and Israel is our strategic partner. We want our friends to be friends with each other. If the sides agree to such an initiative, then Azerbaijan will always welcome them.”

In fact, Israel’s Ambassador to Azerbaijan George Deek recently emphasized the importance of the Azerbaijan-Israel relationship at a press conference: “Israel is one of the first countries to recognize Azerbaijan’s independence. The history of the diplomatic relations between our countries dates back to 30 years ago. Israel-Azerbaijan relations are strategic.”

Deek, an Israeli Christian Arab, added: “Jews have been living in Azerbaijan for many years. The historical ties between the two peoples are very deep.”

However, some are jealous and wish to destroy the Azerbaijan-Israel relationship. Within the past week, the Israeli-Azerbaijan strategic partnership came under attack when the Massachusetts-based Armenian Weekly published an article denouncing Israel for selling weapons to Azerbaijan, claiming it would be equivalent to Armenia selling weapons to Hamas or Hezbollah.

The article accused Israel falsely of “being an accomplice to war crimes,” demonizing both Israel and Azerbaijan. No one can compare Azerbaijan to Hezbollah or Hamas.

Azerbaijan is a secular, modern nation, which prides itself on promoting religious pluralism and tolerance. It is not a terror organization like Hezbollah or Hamas, which systematically target civilian population centers, use their own people as human shields, and represses women, minorities, and homosexuals.

Also, unlike Hezbollah and Hamas, Azerbaijan is willing to make peace with Armenia, once the Second Karabakh War brought an abrupt end to Armenia’s illegal occupation of one-fifth of Azerbaijan in violation of four UN Security Council Resolutions.

In fact, despite its conflict with Armenia, Baku still has an operational Armenian church, and Azerbaijan is restoring Armenian holy sites in the Karabakh region. To date, neither Hezbollah or Hamas has been willing to make peace with Israel or recognize the Jewish state within any borders, and they do not respect Jewish heritage sites under their rule.

In conclusion, despite the pro-Armenian position of Foreign Minister Lapid, the Israeli government must not undermine its fruitful and successful relationship with Azerbaijan. This relationship is far more important than the whims of the Foreign Minister and harming it would inevitably obscure the future of Israel’s relations with the moderate Muslim countries in the region.

Rachel Avraham is a political analyst working at the Safadi Center for International Diplomacy, Research, Public Relations and Human Rights.  She is the author of “Women and Jihad: Debating Palestinian Female Suicide Bombings at the American, Israeli and Arab Media.”

(This article has been translated from the original publication in Hebrew.)