Although steps have been taken to find lasting peace in the South Caucasus region, more can be done by the EU to support its eastern partners, argues Parviz Yarmammad. 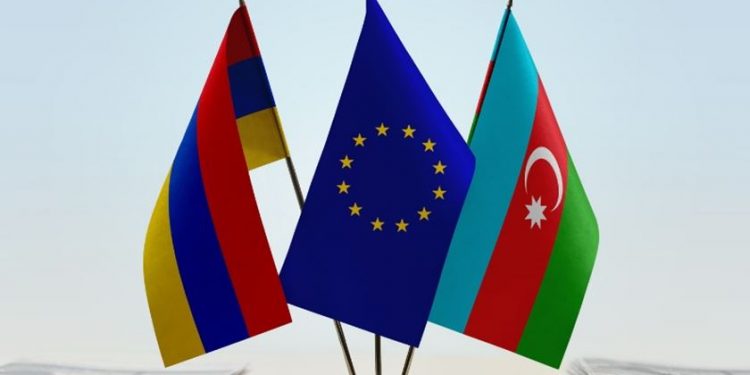 Exactly one year ago, the second Nagorno-Karabakh war erupted when Armenian attacks on Azerbaijani villages intensified. In 44 days, Azerbaijani forces rapidly liberated most of the land that was invaded by Armenia in the 90s. These areas comprised the former Nagorno-Karabakh autonomous region and seven adjacent districts (Herbst, 2020). The invasion caused around a million Azerbaijanis to live as internally displaced persons (IDPs) for almost 30 years (Babayev, Schoch, & Spanger, 2020, pp. 279-280).

On the 10th of November, a trilateral ceasefire agreement brokered by Russian President Vladimir Putin was signed, which provisioned deployment of Russian peacekeepers within parts of the former Upper-Karabakh region of Azerbaijan, an area settled by ethnic Armenians (Aydabirian, Libaridian, & Papazian, 2021, pp. 18-24). In additional to the liberated regions, Armenia agreed to withdraw its military forces from occupied territories while Azerbaijan let Armenia use the road connecting the Republic of Armenia to Karabakh.

The agreement covered the resettlement of Azerbaijani IDPs to liberated territories as well as to areas under peacekeepers’ control. It also required Armenia to open a road through its territories to connect the Azerbaijani exclave of Nakhchivan with the rest of Azerbaijan (President of the Republic of Azerbaijan, 2020).

However, today, Azerbaijanis have not yet been able to return to their homeland due to Armenian planted mines (Kuzio, 2021), and Armenia still insists on not providing a corridor for Azerbaijan through its territories (Yevgrashina, 2021).

Why the South Caucasus?

Both Armenia and Azerbaijan are partners of the European Union within the Eastern Partnership framework. Additionally, the South Caucasus region is an important region for the Union due to the region’s geopolitics. The region is under the active political and economic influence of Russia, Turkey, Iran, and even sometimes China. It is therefore not politically desirable for the EU to have Eastern Partners come under the influence of the Union’s ideological rivals. Moreover, the South Caucasus has important transport linkages between Asia and Europe. Similarly important, the South Caucasus, particularly Azerbaijan, is crucial for the Union’s drive to diversify energy sources and decrease Russian influence in the EU energy market (Borrell, 2021).

“If the European Union wants to be more active in peacebuilding, the implementation of concrete socio-economic projects with the mutual participation of Azerbaijan and Armenia is vital for peaceful interaction of the two nations”

Prospective Steps by the European Union

From the EU side, in July, High Representative Josep Borrell stated the Union’s readiness to build peace and several EU Foreign Ministers subsequently visited the region (Borrell, 2021). On the other hand, European Council President Charles Michel, in his interactions with the leaders of Azerbaijan and Armenia, expressed the EU’s willingness to contribute to the peace process. Charles Michel always emphasised the need for confidence-building between the sides. Indeed, facilitating the exchange of Armenian detainees with mine maps on June 12 and the visit paid by Michel to Azerbaijan and Armenia were remarkable steps by the EU (Muradov & Rzayev, 2021).

However, before building confidence between conflicting sides, the EU itself needs to gain the trust of both parties. For example, in July, the European Union allocated €2.6bn to Armenia, whereas Azerbaijan got only €140m (BBC News, 2021), (Mejlumyan, 2021). However, Azerbaijan suffered more than Armenia during the war; Azerbaijani cities were bombed, while cities that were invaded were left completely demolished and mined (QC, Becker, & Kern, 2021, pp. 34-44), (BBC News, 2021). Conversely, none of this happened to Armenia. In order to maintain the return of IDPs and the reconstruction of the cities, Azerbaijan needs more financial support from the European Union. The unequal distribution of resources brings the impartiality of the EU into question.

“We, as an Azerbaijani community in Europe, expect the European Union to take active steps for peace and stability in the region”

Furthermore, if the European Union wants to be more active in peacebuilding, the implementation of concrete socio-economic projects with the mutual participation of Azerbaijan and Armenia is vital for peaceful interaction of the two nations. Considering the limitations of the EU’s political engagement, the projects could be implemented within the Eastern Partnership framework. Unfortunately, so far, there have not yet been any such concrete steps.

We, as an Azerbaijani community in Europe, expect the European Union to take active steps for peace and stability in the region. We hope no war will take place again and the winning side will always be the people of the region.

Mejlumyan, A. (2021, July 15). Eurasianet. Retrieved from Armenia gets aid boost from EU: https://eurasianet.org/armenia-gets-aid-boost-from-eu

Paul, A., & Maisuradze, I. (2021, April 30). European Policy Center (EPC). Retrieved from Georgia’s road ahead: Time for the EU to show some tough love: https://epc.eu/en/publications/Georgias-road-ahead-Time-for-the-EU-to-show-some-tough-love~3e7c18