Why the South Caucasus is a strategic region for Turkey

Russia’s war in Ukraine has increased Turkey’s geopolitical importance, and Ankara is determined to get the maximum economic benefit from its strategic location among three continents. 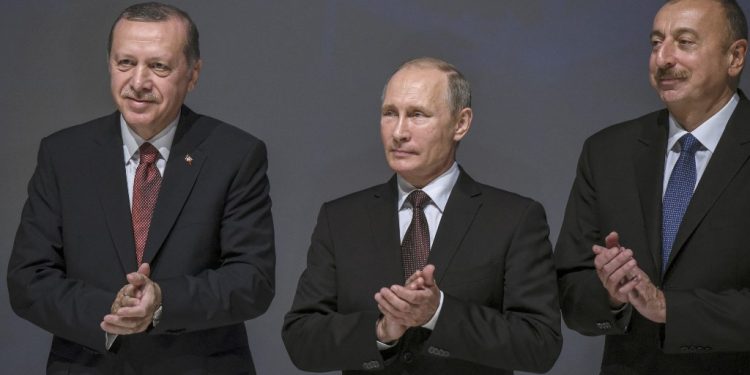 Turkey has thus far been successful in mediating a grain deal between Russia and Ukraine. The Turkish government, however, has its sights set on something bigger, and that is becoming an energy hub and a key energy mediator between Russia and Europe. The South Caucasus region has grown increasingly important for the energy security of a large part of the world, as the region is situated at the center of Eurasia’s major energy and transport corridors.

Turkey is a highly energy-dependent country that spends huge amounts on oil and gas imports. While Turkish President Recep Tayyip Erdoğan’s Justice and Development Party (AKP) has repeatedly claimed in the last few years to have discovered rich natural gas fields in the Black Sea, production has still not begun. Turkish experts claim that Erdoğan’s statements regarding natural gas exploration are false and that he is only using it as a means of appeasing the Turkish people, who are currently struggling to cope with soaring energy bills. It is, however, true that Erdoğan’s AKP is successfully making Turkey a key energy hub.

The South Caucasus region, comprising the former Soviet republics of Armenia, Azerbaijan and Georgia, borders Turkey, Russia and Iran. This region is known to be one of the most unstable in the world due to its strategic location and rich mineral resources. Turkey was among the first countries to recognize the independence of these three South Caucasus nations following the dissolution of the Union of Soviet Socialist Republics (USSR) in 1991. Ankara established strong ties with Azerbaijan and Georgia, but to date Turkey has no diplomatic relations with Armenia, and its borders have remained closed since Armenia’s occupation of the Kalbajar region of Azerbaijan in 1993. Armenia’s claim of an “Armenian Genocide” in 1915 in Ottoman Turkey has remained a major obstacle to the normalization of ties between the two nations.

Turkey played a key role in Azerbaijan’s military victory over Armenia in Nagorno-Karabakh in November 2020 after 44 days of war. Since then, Turkey has begun challenging Russia and Iran’s dominance in the South Caucasus region.

Turkey has historical ties with the South Caucasus nations as the Ottoman Turks ruled the region and Ankara established strong political and economic ties with Azerbaijan and Georgia after the collapse of the Soviet Union. The Russo-Georgian war in 2008 and the ongoing Nagorno-Karabakh conflict between Azerbaijan and Armenia helped Turkey strengthen its ties with these countries. NATO member Turkey is an important ally for Georgia. Turkey trained the Georgian army during their war against Russia in 2008, also supplying them with military equipment. Although Turkey avoids provoking Russia owing to its close ties with Georgia, that has not stopped Turkey from strengthening its political, military and economic ties with Georgia. Since losing its provinces of Abkhazia and South Ossetia to Russia, the Tbilisi government is keener to establish ties with Western countries and Turkey. Georgia is a very strategic country for pipelines. The Baku–Tbilisi–Ceyhan (BTC) pipeline is a 1,768-kilometer-long crude oil pipeline, the world’s second-longest oil pipeline in the former Soviet Union, carrying crude oil from the Azeri–Chirag–Gunashli oil field in the Caspian Sea to Turkey’s Mediterranean Sea via Tbilisi.

The South Caucasus Gas Pipeline, also known as the Baku–Tbilisi–Erzurum Pipeline, runs from Azerbaijan’s capital of Baku through the Georgia-Turkey border, connecting to the Trans-Anatolian Gas Pipeline (TANAP). TANAP, the longest (1,811 kilometer) natural gas pipeline in Turkey, the Middle East and Europe, transports natural gas extracted in Azerbaijan’s Shah Deniz region, first to Turkey and then to Europe by connecting to the Trans Adriatic Pipeline (TAP), which originates at the Greek-Turkish border.

These energy pipelines allow Turkey to transfer much-needed oil and gas from the Caucasus to Turkey and Europe without traversing Russian or Armenian territories.

Besides having good relations with Georgia and Azerbaijan, Turkey is trying to normalize its relations with Armenia. The two countries currently do not have diplomatic relations, but they have been making an effort to normalize relations since 2009. As Yerevan has been trying to improve its relations with Western countries, Turkey is an important trade route for Armenia to connect with the West. The Turkish and Armenian foreign ministers signed two protocols in Zurich in October 2009 to normalize relations, but in 2018 Armenia’s National Security Council officially scrapped the Zurich Protocol. The process of normalization is, however, continuing as Turkey and Armenia recently agreed to open their land borders to other nationals who are not Turkish or Armenian citizens “at the earliest date possible. Turkish President Erdoğan had talks with Azerbaijani President Ilham Aliyev and Armenian Prime Minister Nikol Pashinyan, together with Hungarian Prime Minister Viktor Orban, at the European Political Community summit in Prague on Oct. 6, 2022. Despite all these diplomatic efforts, Azerbaijan has prevented Turkey from fully normalizing its relations with Armenia. Turkey has always maintained strong relations with Azerbaijan as these two nations share common ethnic, linguistic and religious roots as well as strong economic relations.

The United States and European Union nations have cooperated with Turkey in the South Caucasus for security reasons and energy deals. Turkey is a natural partner for Europe and the US in the region against Russia and Iran. However, Turkey is the only NATO member that did not join the West’s economic sanctions against Russia and in fact has increased its economic ties with Moscow. The TurkSteam and Blue Stream pipelines carry Russian gas to Turkey, and Russia building a nuclear power plant in Turkey.

Peace in the South Caucasus is imperative for the success of Turkey’s energy projects as well as to protect the Muslim population in the region. On Jan. 16, 2000 then-Turkish President Süleyman Demirel put forward a proposal for the establishment of a “Stability Pact for the Caucasus” to stop war between Russia and  Chechnya. Erdogan proposed a revised version of Demirel’s proposal on Aug. 13, 2008 in Moscow to establish a “Caucasus Stability and Cooperation Platform” (CSCP).

Although Turkey’s sway in the region is on the rise, Russia and Iran will attempt to increase their influence in the South Caucasus against Turkey and the Western bloc. While Russia has always backed Armenia, Iran views the Turkey-Azerbaijan collaboration as a threat to its national security at its borders.