In the Caucasus (south of Russia, north of Turkey), Azerbaijan held a Victory Parade on December 10th 2020 to celebrate their victory over Armenia in a 44-day war the enabled the Azeris to regain about half of the disputed (since 1991) Nagorno-Karabakh territory. 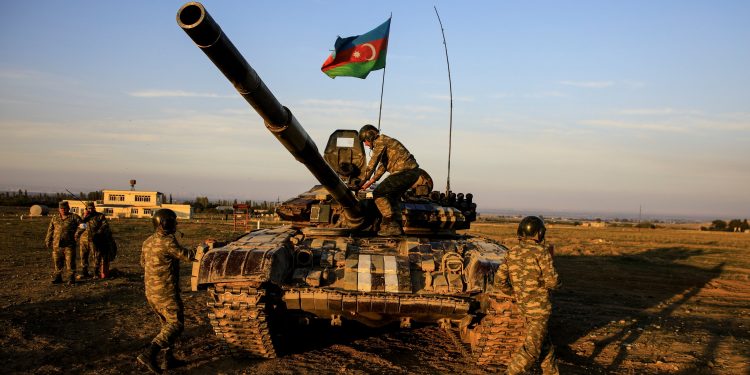 Azerbaijani soldiers at a military training and deployment center amid the Nagorno-Karabakh conflict, near the city of Ganja, Azerbaijan, Oct. 23, 2020. (Reuters Photo)

The parade included examples of the hundreds of Russian made Armenian military trucks and weapons provided by Russia. It was interesting to note that all of the Armenian Russian weapons were Cold War era (pre-1991) systems, including Osa-AK (SAM-8), self-propelled system air defense systems armed with 170 kg (374 pound) missiles. Osa was introduced in the 1970s and production ended in 1988. OSA has been upgraded several times. Reliability has improved as well but it is still not as reliable as comparable Western systems. OSA is carried in 17.5-ton 6×6 wheeled armored vehicle with a crew of five to operate the radar, fire the missiles, drive the vehicle, and maintain all that gear. The vehicle carries six missiles in sealed firing containers. The missiles can hit targets as high as 12,000 meters (39,000 feet) and up to 15 kilometers away. The Turkish UAVs and jammers worked against Osa just as they did against the similar and more recent Pantsir systems. Israel used similar tactics to defeat Pantsir in Syria. The parade featured Azeri weapons including more recent Russian systems, like the T-90C tanks, provided by Russia a decade ago. The most effective Azeri weapons were Israeli, which has replaced Russia and the primary source of modern weapons, including UAVs and, Barak 8 air defense systems and an Israeli Pine radar for spotting incoming ballistic missiles that Barak 8 intercepts, including at least one Russian Iskander, a recent design that was supposed to more difficult to detect and intercept.

The Turks were pleased with the outcome of the war but dismayed that the modern Israeli weapons were seen as more important to Azerbaijan than calling in Turkish mercenaries. The Azeris can obtain more Israeli UAVs and arm them with laser guided missiles from several different sources. The Turkish Bayraktar TB2 UAVs armed with Turkish laser guided missiles were copies of earlier Israeli and American systems and are exported to customers who prefer to buy Moslem developed systems that are close enough to superior Israeli and American systems. Russia is still trying to catch up with Turkey in the armed UAV department.

The Azeris credited Turkish intervention and lots of modern Turkish weapons for the victory. Israel publicly supported Azerbaijan and continues to supply Azerbaijan with weapons. The Azeris are one the largest customers for Israeli weapons and the only Moslem state to defy Arab efforts to discourage Moslem countries from buying Israeli exports of any kind. Turkey hoped to gain Azerbaijan as another export customer for their growing list of modern weapons but have a tough time competing with Israel.

The 44-day war ended when Russia negotiated a ceasefire in November and immediately supplied 2,000 troops to supervise and expedite both sides carrying out the terms of the peace deal. This included both sides withdrawing or moving some of their troops. Russia convinced Armenia that they were losing the battle and risked losing all disputed territory inhabited by Armenians. There were some benefits for Armenia. Azerbaijan ended its economic blockade of Armenia that had been in force since 1991. Turkey was rewarded with direct land access between Turkey and Azerbaijan that does not require crossing Georgian or Iranian territory.

Russia used its good relations with Armenia, Azerbaijan, Turkey, Iran and Pakistan to speed agreement on the ceasefire and a permanent peace deal. This was helped by the fact that Russian public opinion did not have a favorite. While Armenia has long been an ally of Russia, Azerbaijan and Turkey were also seen as friends, not foes.

There had already been several short wars between Armenia and Azerbaijan over the disputed territory and until now Armenia won them all. Another round of violence broke out in late September 2020 and this time Azerbaijani forces advanced into the long-disputed territory of Nagorno-Karabakh.

Although Russia has a military assistance treaty with Armenia, Russian officials recently pointed out that the treaty does not cover the disputed Nagorno-Karabakh area and Russia would not send troops to Nagorno-Karabakh to help the Armenians. Russia has several defense-related agreements with Armenia. The first is the 2002 CSTO (Collective Security Treaty Organization) that included Russia, Armenia, Kazakhstan, Kyrgyzstan, Tajikistan and Uzbekistan. All these nations were once components of the Soviet Union, which dissolved in 1991. The CSTO restored some of the economic and military relationships these nations had before 1991.

In 2016 Russia and Armenia agreed to a mutual defense pact that included a joint Russian-Armenian military force in Armenia. This joint force was for use against any military threat to either nation. This mainly benefits Armenia. The 2016 treaty allowed Russia to continue deliveries of weapons and ammo to Armenia in 2016 despite the fact that Armenian troops were fighting forces from neighboring Azerbaijan once more.

The Armenia-Azerbaijan violence has always been about Nagorno-Karabakh, which Armenia and Azerbaijan have been fighting over since these two former components of the Soviet Union gained their independence in 1991. Back then Armenia went to war with Azerbaijan to defend the independence of an Armenian majority district (Nagorno-Karabakh) that was separated from Armenia by a strip of Azerbaijan territory populated largely by Azeris. Although Azerbaijan is larger than Armenia, and has oil, the Armenians were better fighters, and the conflict festered, despite several ceasefire agreements.

Russia considers both Armenia and Azerbaijan essential buffer states. This is what Russia calls the “near abroad” and considers then sacrosanct. The Russian paranoia over NATO is mainly about near-abroad nations in Eastern Europe joining or wanting to join NATO. That was not a problem with Armenia, which wanted protection from Turkey and Azerbaijan fears of Iranian aggression. Russia did not appreciate Turkey getting involved with the near-abroad states. Russia was diplomatic about the unwelcome Turkish presence and the Turks knew that being in Azerbaijan was seen as a rare victory over ancient foe Russia.

Armenia has a population of about three million and a per-capita GDP of $4,500. Technically Nagorno-Karabakh is not part of Armenia but, since 1991, as the Republic of Artsakh it has survived because Armenia provides military aid to defend it from Azerbaijan attacks. Artsakh has a population of 145,000 and per-capita GDP of $4,700. Azerbaijan has a population of 10.2 million and per-capita GDP of $4,800. Armenians are better educated and more entrepreneurial but Azerbaijan has oil and Armenia does not. About a third of the Azerbaijani GDP is due to oil exports. Since the 1990s Azerbaijan has sought to close the education and entrepreneurial gap with Armenia and has made a lot of progress. That has contributed to confidence that the next invasion of Nagorno-Karabakh would succeed. The current effort did much better than previous ones but the Azerbaijani are still suffering higher losses and progress was steady but not as fast as desired.

The Armenian mutual defense pact with Russia does not include Nagorno-Karabakh and Armenians have adapted to that. In 2016 Armenia defeated an Azerbaijani April “offensive” and Russian brokered a new ceasefire deal. Russia and Iran cooperated to maintain the ceasefire. Iran has more influence over Azerbaijan and did what it could to persuade the Azerbaijanis to stop violating the ceasefires. That worked for a while, mainly because the previous Azerbaijani attacks were not successful. After 2016 Azerbaijan continued to purchase new weapons and improve the performance of its troops. There was little doubt that there would be another war.

Both Azerbaijan and Armenia were formerly part of the Soviet Union and quite different even though they were neighbors. Azerbaijan is majority Moslem while Armenia is Christian. Along with the smaller Georgia, these two are the only two nations in the Caucasus that are majority Christian. For over a thousand years Armenians and Georgians resisted efforts by Moslem neighbors to make them Moslem. Russia played a key role in preventing that and considers itself the “protector” of Armenia. Despite that Russia has managed to maintain good relations with Azerbaijan as well. In doing that Russia established one of the more successful peacekeeping operations since the Cold War ended by getting Armenia and Azerbaijan to agree to a ceasefire in 1994 after another round of heavy fighting over Nagorno-Karabakh. Russia became a military ally of Armenia as part of that arrangement. Iran has tried, and not always succeeded, to be on good terms with Azerbaijan, if only because about a quarter of the Iranian population are Azeris. At the same time Iran and Russia, traditional enemies, have become allies and those links are being used to deal with latest round of violence.

Iran has long harbored an intense interest in Azerbaijan. This is because most of the Turkic and Moslem Azeris live in Iran. Up until 1813, modern Azerbaijan was part of Iran. Then the Russians showed up. Armenia and Azerbaijan were the last Russian conquests as the Tsar’s soldiers and Cossacks advanced through the Caucasus in the 18th and 19th centuries. The Russians stopped when they ran into the Turkish and Iranian empires, but not before taking a chunk of Azerbaijan from Iran. The Iranians have not forgotten. In effect, most of “Azerbaijan” is in Iran and Iran has long hoped to reunite all Azeris under their rule. Many Iranian Azeris have risen to senior positions in the government. Despite that, most Azeris would like all Azeris united in a single Azerbaijan. This is not a popular idea within Iran. The Russians, on the other hand, have come to accept the 1991 loss of Azerbaijan and Armenia.