When the five Caspian littoral states (Azerbaijan, Iran, Kazakhstan, Russia and Turkmenistan) finally agreed, in August 2018, to the delimitation of the surface of the sea after almost two decades of on-again, off-again talks, many assumed that accord meant the situation in and around the Caspian would stabilize. 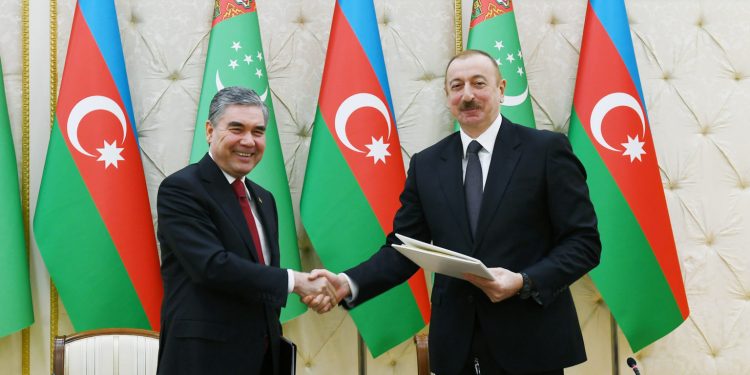 But the agreement did not address perhaps the thorniest issue—the delimitation and demarcation of the seabed, where the natural wealth lies and across which proposed trans-Caspian energy pipelines would pass. Consequently, the period since 2018 has been marked by even more competition among the littoral states, with most seeking new alliances as the best way to gain advantage in that still-disputed realm (Vestnik, June 10, 2020). Cooperation in this regard between Russia and Iran has attracted most of the attention lately (see EDM, February 25, 2021). But a recent agreement between Azerbaijan and Turkmenistan may prove to be even more significant. It expands opportunities for Turkic regional neighbor Turkey to project power across the South Caucasus into Central Asia as well as to counter both Russia and Iran. Indeed, it is now clear that some of these alliances are forming precisely to offset others, leading to a dynamic series of moves and countermoves by opposing groups of states.

The signing of a memorandum of understanding by the presidents of Azerbaijan and Turkmenistan on January 21 of this year and its ratification a month later formally ended years of disputes over the Dostlug (“Friendship”) oil and natural gas field located on the Caspian seabed between the two countries. This agreement did not come out of nowhere. It followed more than 50 bilateral accords and 5 visits by their presidents to each other’s capitals over the past decade. Azerbaijan’s military victory in Karabakh last fall also increased its influence and ability to reach other agreements, according to Nikita Belukhin, a scholar at the Russian foreign ministry’s Moscow State Institute of International Relations (MGIMO) (IA-Centr, March 19; see EDM, January 27, February 18).

Given both the size of the Dostlug field and its location, the Azerbaijani-Turkmenistani accord not only opens the way for outside investment but changes the economic and political map of the region. Western actors are likely to be interested in becoming involved now that the issue of legal control has been established; but, Belukhin argues, the geopolitical changes are more significant. On the one hand, the new agreement gives Azerbaijan and its more powerful ally Turkey an expanded role in Central Asia—something that puts both Baku and Ashgabat at odds with Tehran over preferred pipeline routes extending into Afghanistan (Tehran would prefer a route through its territory). And on the other hand, by expanding trans-Caspian contacts, the accord represents a challenge to Moscow, which prefers an expansion of north-south routes over any growth in east-west ones, lest Turkey expand its influence at Russia’s expense (IA-Centr, March 19, 2021; see EDM, March 24, 2020).

In his analysis of the implications of the accord, Belukhin stresses three things. First, he argues, it was achieved by the two countries without any outside mediation. Neither the West nor Moscow—nor anyone else—was involved. That represents a new era in the region in that the local regimes are increasingly acting on their own rather than as agents for someone else, even if outsiders continue to try to use them for their own interests. Second, the accord shifts Turkmenistan away from both China and Iran. Up to now, Ashgabat has been exporting its gas and oil to other Central Asian countries, China, and Iran; but now it will be in a position to send these hydrocarbons westward, through Azerbaijan and Turkey, to Europe. That will almost surely lead to a reorientation of Turkmenistan toward Turkey and the West and away from Iran, China and even Russia. And third, this situation will lead to the development of a trans-Caspian pipeline system (for example by Turkmenistan connecting into Azerbaijan’s near-coastal Azeri-Chirag-Guneshli pipeline network), allowing Central Asians to act more independently of Moscow as well as others.

Russia is obviously worried about all this, Belukhin suggests. Indeed, his article should be read as evidence of that concern. But the country that appears to have been the biggest loser geopolitically from the January accord is Iran. Not surprisingly, a Tehran-based analyst has taken the lead in suggesting that all the hopes Baku, Ashgabat and Ankara may have are almost certainly misplaced because of problems ahead with pipelines, financing and even the basis of cooperation between the three capitals. In a Persian-language article now translated into Russian (IRAS, February 9; Vestnik, March 18), Behrus Gazal of the Institute of Strategic Research on the East writes that the three Turkic partners are counting their chickens before they are hatched. Therefore, Gazal suggests, those in Moscow and Tehran worried about these prospects are being overly alarmist.

He points to all the problems Azerbaijan and Turkmenistan have had in the past regarding the Dostlug offshore field and argues that the tensions they produced then have not dissipated now and are not likely to, agreement or not. The Iranian expert further asserts that, at least in the next few years, the links Turkmenistan established with Russia and Iran are likely to continue, however much Baku and Ankara hope for a change. Gazal’s words are presumably balm to the ears of many in his capital and in Moscow, but the Baku-Ashgabat accord does open a new era of trans-Caspian cooperation, which Azerbaijan and Turkey will certainly seek to promote in cooperation with Western actors. In contrast, Russia and Iran, for their own interests, will seek to block or at least delay such actions. As a result, yet another accord in the Caspian region seems likely to generate new controversies even as it ostensibly ends old ones.