With the EU’s help, Armenia is inching closer to peace with Azerbaijan

After nearly two years of intermittent border skirmishes and protracted diplomatic talks, Armenia and Azerbaijan are edging closer to reaching a definitive peace agreement to their decades-long dispute over the Nagorno-Karabakh region. 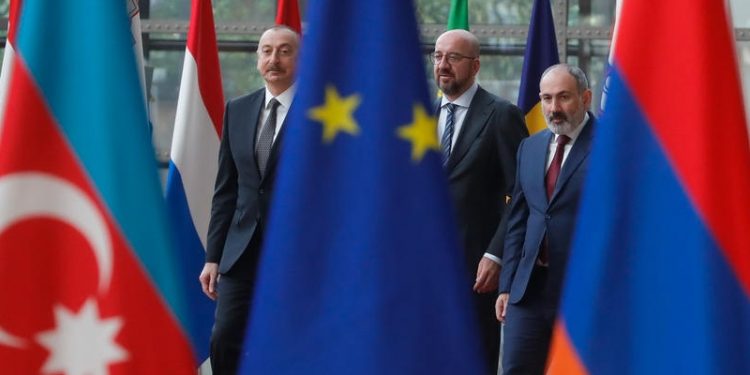 Significant hurdles still exist, but the Armenian perspective on Nagorno-Karabakh since the end of the 2020 war over the breakaway Azerbaijani province has undergone significant changes, reflecting the altered geopolitical balance of power in the region.

The first concrete evidence of the progress in peace negotiations came in March 2022, when Azerbaijan presented a framework for normalizing bilateral relations. This includes establishing diplomatic relations, opening transport routes, mutually recognizing territorial integrity and, most important of all, acknowledging the absence of territorial claims on either side. Border delimitation and demarcation—a troubling issue between the two historical rivals—was another component of the proposed peace plan.

Surprisingly, Armenia did not summarily reject Baku’s proposals. Instead, in responding to the plan, Armenian Foreign Minister Ararat Mirzoyanstated that for Yerevan, “the Nagorno-Karabakh conflict is not a territorial issue,” but rather a matter of protecting the rights of ethnic Armenian inhabitants of the region, thereby marking a significant shift in Yerevan’s decades-long rhetoric. The First Nagorno-Karabakh War following the breakup of the Soviet Union ended in the early 1990s with Armenia victorious and in control not only of Nagorno-Karabakh but also significant amounts of Azerbaijani territory around it. Ever since then, Yerevan challenged Azerbaijan’s territorial sovereignty over Nagorno-Karabakh and pushed for international recognition of the separatist region’s independence.

The shift in viewpoint was echoed by Prime Minister Nikol Pashinyan in a speech to the National Assembly, signaling a long-term change in the perception of the Armenian leadership. This does not mean that Armenia will merely accept Azerbaijan’s proposed plan as is. Yerevan is likely to make a counteroffer with its own demands, including protections for the status of the Armenian language in Nagorno-Karabakh and probably some sort of autonomy for the region.

Whether the two sides reach an agreement remains to be seen, but the momentum generated by the involvement of an increasingly diversified range of outside actors in the peace process favors a positive outcome.

Indeed, Pashinyan and Azerbaijani President Ilham Aliyev made significant strides toward a deal when they met in Brussels in May to discuss the peace process. In talks mediated by European Council President Charles Michel, they reached an agreement on the task of delineating borders, on which the two sides have already begun work, as well as an agreement in principle on transit routes. Should they materialize, Azerbaijan will gain direct road access to its Nakhchivan exclave through what it calls the “Zangezur corridor” in Armenia’s southernmost province of Syunik, while Yerevan will enjoy a railway connection to Russia via Azerbaijan proper. The most recent reports from lower-level Russian-mediated talks suggest that both sides are nearing agreement on the final stretch of the Zanzegur corridor route.

The diplomatic initiative by Brussels is important from a geopolitical perspective. The 2020 war and subsequent cease-fire, in which Moscow and Turkey played dominant roles, were a debacle for Western and especially European diplomacy. The truce sealed in Azerbaijani territorial gains while freezing in place the final settlement of Nagorno-Karabakh’s status under the guarantee of Russian “peacekeepers” deployed there. Moscow has since sought to ensure it is the only actor influencing the shaky Armenia-Azerbaijan talks, but the meeting in Brussels reversed this trend, bringing EU involvement back to the South Caucasus.

An Armenia at peace with its neighbors would challenge the very foundation of Russia’s regional dominance.

In reality, the EU still lacks the concrete tools to become a major presence in the region, and Moscow’s influence is inescapable, given Russia’s geographic proximity and the military role it plays as a treaty ally to Yerevan. But the progress made under European auspices has been tangible, and so far this year the two sides have met nearly exclusively under the auspices of EU mediation. In comparison, Moscow’s efforts seem half-hearted.

The wider geopolitical picture also favors the EU’s involvement and raises questions about Moscow’s sincerity in pursuing a final status agreement for Nagorno-Karabakh. Russia’s preoccupation with its unjustified war in Ukraine has created a power vacuum in the South Caucasus that the EU is trying fill. Another dimension of the war in Ukraine has been to heighten anxieties over the prospect of Russian military aggression in Armenia and Azerbaijan, both of which have always suspected Moscow’s murky hand in helping to prolong the conflict between them.

Azerbaijan, which shares a border with Russia, feels especially vulnerable, despite the agreement on enhanced partnership with Moscow that both sides signed in February 2022. Any significant tilt by Baku toward the EU could lead to the deterioration of bilateral ties with Moscow and potential military and economic moves from the Kremlin. Armenia, too, is skeptical of Russia’s commitment, as Moscow has on a number of occasions failed to assist Yerevan militarily against what the Armenian side saw as Azerbaijani aggressions, particularly in 2016 and 2020.

Thus, both Armenia and Azerbaijan have their own interests in seeing the EU play a role as a possible peace-broker, in order to balance Russia’s overbearing influence.

Another geopolitical dimension facilitating the progress between Armenia and Azerbaijan is the nascent rapprochement between Armenia and Turkey. Despite their historically antagonistic relations, the two sides have recently agreed to open their borders for travel by third-country nationals. This could potentially lead to a full opening of the border and even the restoration of economic ties. Both sides also hinted that future talks would be focused on the full normalization of diplomatic ties, building upon previous positive signals from both capitals on the need for a rapprochement. The two processes are not officially linked, but any thaw between Yerevan and Ankara is closely related to the progress made between Baku and Yerevan, with the potential to change our basic understanding of the geopolitics of the South Caucasus.

Notwithstanding the progress that has been achieved to date, a number of challenges stand in the way of a peace agreement between Armenia and Azerbaijan. First, Armenians in Nagorno-Karabakh have not been pleased with the Armenian leadership’s change in tone. In mid-April, some Nagorno-Karabakh Armenians condemned Yerevan’s rhetoric and stated their opposition to living under Baku’s administration, even going so far as to suggest the region could seek to be annexed by Russia.

The domestic opposition in Armenia is also putting pressure on the government over its change of stance. Followers of former President Robert Kocharyan have pressed Pashinyan to abandon his new approach to Nagorno-Karabakh. The Armenian diaspora, too, has been heavily involved in opposing any thaw in ties between Baku and Ankara. Yet to the majority of Armenians, the diaspora’s demands and understanding of the situation is disconnected from the reality on the ground. Indeed, many Armenians do not harbor hostility toward Turkey, as do Armenians in the diaspora.

Yet, whatever challenges this opposition poses to Pashinyan, they are unlikely to make him change course. He feels certain that he can weather the storm, all the more so as the intensity of domestic protests has fallen dramatically over the past several weeks. There is a growing consensus in Armenia that Pashinyan cannot be held accountable for the defeat in 2020; rather, under the Republican Party governments that preceded Pashinyan’s rise to power in 2018, endemic corruption over decades gradually undermined the country’s ability to defend itself. Moreover, there is no viable political alternative to Pashinyan, who handily won reelection in a ballot held a year after the 2020 war. He still enjoys the support of approximately 40 percent of the population, while the opposition is divided and lacks an appealing long-term vision.

Russia’s interests, too, might complicate the improvement of Armenia’s ties with both Azerbaijan and Turkey, as it is still far from evident what Moscow stands to gain from such a prospect. Ever since the collapse of the Soviet Union, Moscow benefited from Yerevan’s relative isolation, with Armenia’s reliance on the Russian military and economy allowing Moscow to maintain a significant presence in the South Caucasus. However, an Armenia at peace with its neighbors would challenge the very foundation of Russia’s regional dominance. So while Moscow has on a number of occasions supported rapprochement between Armenia and its neighbors, Moscow’s current motivations are still far from clear.

It is still uncertain whether Armenia and Azerbaijan will ultimately reach a definitive peace agreement. And the outcome of the current efforts to do so are intimately tied to the parallel process of reconciliation between Armenia and Turkey. What is clear is that the wider geopolitical trends represented by the EU’s growing involvement and Russia’s preoccupation elsewhere, combined with the internal political developments in Armenia, suggest the process is likely to continue.

Emil Avdaliani is a professor at European University and the director of Middle East Studies at the Georgian think-tank, Geocase.