The virtual conference organized by the State Committee on Work with Diaspora on the occasion of "May 28 - Republic Day" was attended by about 367 compatriots from 58 countries, including heirs of the Republicans living in different countries, as well as relatives of the heroes of the Second Karabakh War, representatives of the “Karabakh is Azerbaijan” platform, diaspora volunteers and diaspora youth. 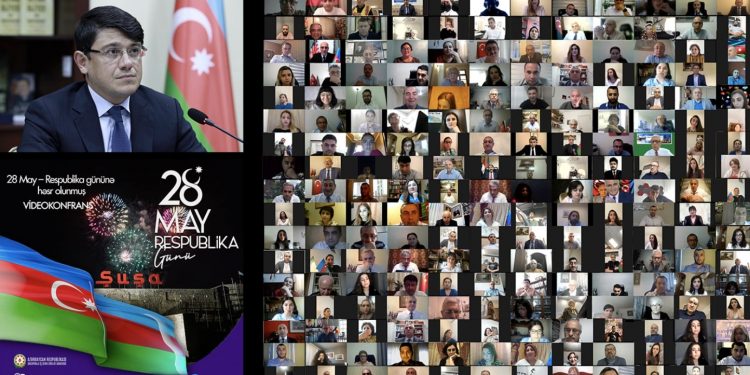 After the National Anthem of the Republic of Azerbaijan was played, the memory of the heroes who were martyred for the independence and territorial integrity of our state was commemorated with a minute of silence.

Congratulating the World Azerbaijanis on the Republic Day, Chairman of the Committee Fuad Muradov spoke about the unparalleled victory of our brave army under the leadership of President of the Republic of Azerbaijan, victorious Supreme Commander-in-Chief Ilham Aliyev and praised the active work of Azerbaijanis around the world during the Patriotic War .

The conference participants drew attention to the recent provocations committed by Armenia in the direction of the Kalbajar region of the Azerbaijani state border and said they would do their best to immediately and objectively inform the world community about the incident on the state border. Speaking about the establishment of the first democratic republic in the Muslim world, the chairman of the committee said that the Azerbaijani people had made a great contribution to the restoration and strengthening of our independence by inviting prominent statesman Heydar Aliyev to power in 1993. 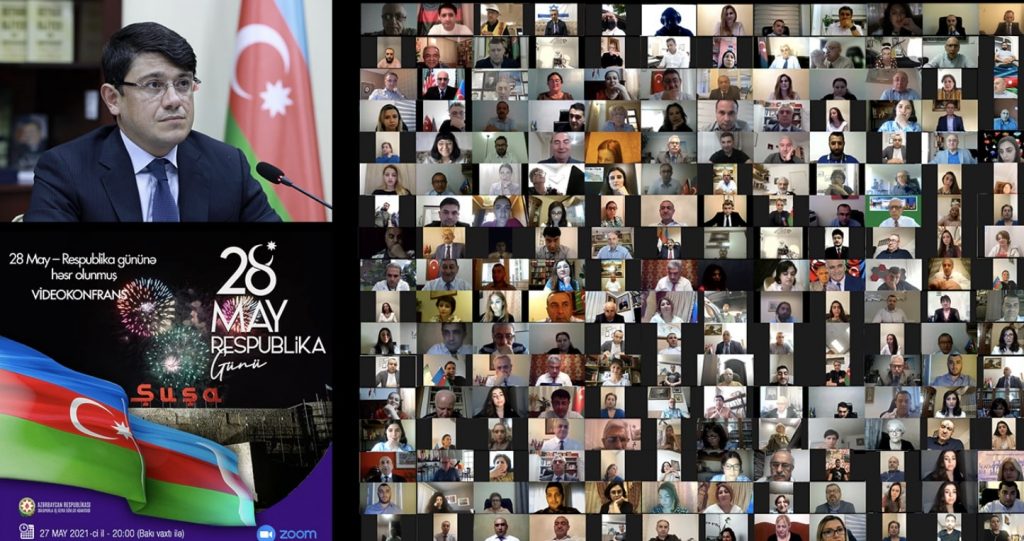 The conference participants praised the establishment of the “100th anniversary of the Azerbaijan Democratic Republic” jubilee medal in 2018 and the presentation of this medal to our compatriots living outside Azerbaijan as a high value given by the Azerbaijani state to the Republic and its heirs.

Expressing their views on the festival in Shusha, our compatriots noted that the services of the Heydar Aliyev Foundation and First Vice President Mehriban Aliyeva are of special importance in presenting the realities of Azerbaijan to the world community and promoting intangible cultural heritage of Azerbaijan in the world. The “Khari Bulbul” music festival organized by the Heydar Aliyev Foundation in Shusha, the cultural capital of Azerbaijan, on the occasion of the historic Victory, once again proved that Azerbaijan is the indivisible homeland of everyone living here.

Maria khan Khoyskaya, the heir of Fatali khan Khoyski, the first chairman of the Council of Ministers of the Azerbaijan Democratic Republic, living in Switzerland, said: “I am very glad that Azerbaijan has taken its decent place in the world and has a bright future.” Timsal Garabakir, the successor of Kazim Garabakir’s dynasty, a prominent Turkish military and political figure, recalled Kazim Bey’s military career in Nakhchivan, expressed great confidence that Turkish flags would fly in the world forever, and congratulated everyone on the liberation of Karabakh. Ahmad Javad’s granddaughter Yagut Abdullayeva, who lives in Israel, also expressed her love for Azerbaijan and wished the World Azerbaijanis eternal unity.

Stressing that “This year, Republic Day is a double holiday for all Azerbaijanis, as the territorial integrity of Azerbaijan has been restored,” our compatriots said with great pride that we have a powerful state like Azerbaijan, which pursues an independent policy without any external, the slogan “Karabakh is Azerbaijan!” expresses the unchanging truth, and the world has already accepted this reality. Each of us will continue to love our country, support for increasing its prestige in the international arena, and do our best to preserve the diaspora solidarity strengthened by the historic victory we won in the Patriotic War.

During the conference, a video covering a long period from the Azerbaijan Democratic Republic to the Republic of Azerbaijan was shown and music calling for unity was played.