Xi’an starts new Trans-Caspian multimodal service, but it’s not the only one

The China-Europe Railway welcomed a new train connection between the Xi’an International Dry Port and Mannheim in Germany. The new multimodal service commenced on 13 April. It crosses the Caspian and Black Seas, passing through Kazakhstan, Azerbaijan, Georgia, Romania, Hungary, Slovakia and the Czech Republic. The Romanian port of Constanta will be the gateway to Europe. 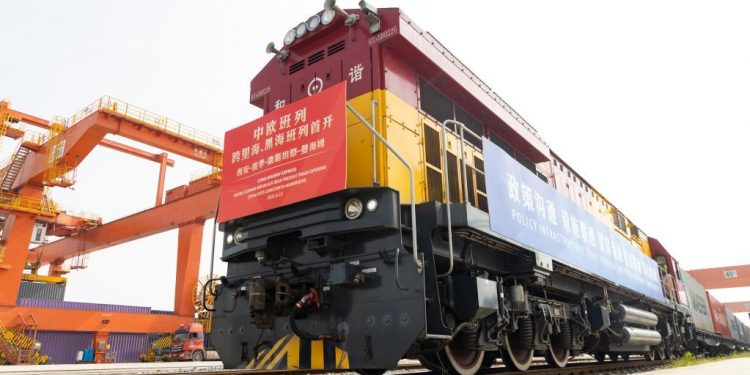 The first train, laden with clothing, sports equipment and other items, departed from Xi’an, heading west through the Khorgos dry port. Cargo will be transhipped to a ferry at the Kazakh port of Aktau on the Caspian Sea. After crossing the Caspian Sea, it will change back to rail at the port of Baku in Azerbaijan and transit to the Georgian port of Poti. From the Georgian Black Sea port, cargo will take the ferry again to the port of Constanta, passing through Eastern Europe straight to its destination in Mannheim, Germany.

This “rail-sea-rail-sea” multimodal transport solution is a new attempt by Xi’an Dry Port to address the current market situation. It is no coincidence that many companies are exploring this alternative solution at the same time. For example, Gansu Wuwei, in cooperation with the Port of Poti, is also operating regular freight trains on the same multimodal route, with further extensions to the Hungarian capital Budapest using rail or inland shipping.

However, Chinese rail companies are not the only ones showing a preference for the Trans-Caspian route. In early March, the Dutch rail logistics provider Rail Bridge Cargo launched a multimodal route between Zhengzhou in China and Duisburg-Neuss in Germany. The service has a transit time of 23-25 days and passes through Kazakhstan, Baku and Poti. However, Constanta is not the only option to enter Europe since the company also uses the Bulgarian port of Varna. From Varna-Constanta, cargo reaches its end destinations either by rail or road.

On top of that, Silk Road company RTSB is also participating in the Middle Corridor ‘fever’ with a multimodal service transiting both through the Black Sea and the BTK line and Turkey. Nevertheless, this service is not explicitly new for RTSB since the company has been exploring these options since 2015.