The new discourse in post-war Armenia

The defeat in the recent war between Armenia and Azerbaijan created a shock effect for Armenia, and the shock wave stirred up political and public discussions on the causes and consequences of the defeat in Armenia and in the Armenian community around the world. These discussions—in different formats, with different social, political and intellectual figures joining in—may be the most democratic process in Armenia in recent years: for the first time in a long time, there are open socio-political debates in the country, different opinions are being voiced and new ideas are being heard. 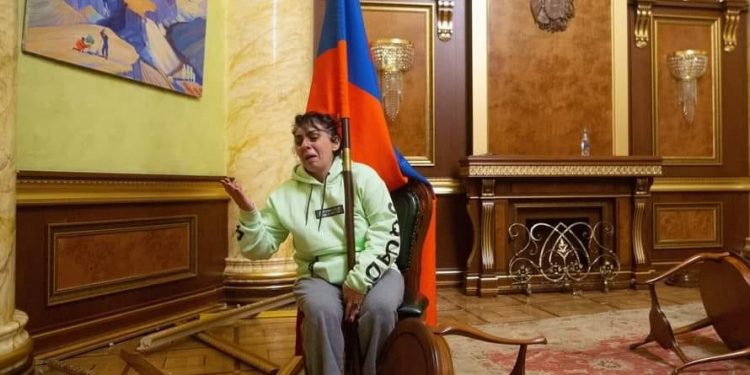 The beginning of the Great Depression. Photo: 1news.az

The euphoria of victory in the First Karabakh War transformed the Armenian military of the time into a political force that was clearly dominant after the military and political triumph. In the ensuing period, political thought and ideology in Armenia were dictated by the victory and winners. Questioning, discussing, dissenting from this ideology has been a taboo in Armenia in the last 30 years. That taboo was built on the world of eternal dreams the winners, who would not see reality, international law and the country’s potential, created for themselves, ingraining their illusions in the public consciousness all this time. As the tale of the Karabakh victory lived on, so would the ideology, and, as it turned out, defeat was the only way to break the taboo.

The key distinction of the discussions that started after the 2020 war is that the last war created conditions for the Armenians to raise issues that had not allowed them to discuss the victory in the First Karabakh War, and to speak out on those issues. The rational voices stifled by the victory became increasingly louder, stronger and more common after the defeat. These are also simple Armenian realities that have been hidden and buried for the last 30 years and therefore need to be emphasized separately.

The Prime Minister of Armenia, the person who received most of the blame for the defeat, was the one who effectively kicked off these debates. Following the trilateral agreement of November 10 that ended the hostilities, the country’s opposition political forces began to attribute the defeat in the war to the mistakes made by the current government. In his response statement, Pashinyan denied the allegations, saying that the Armenians needed a deeper analysis of reality. According to him, what happened could not be the result of one man or one group of individuals, one or more years of mistakes. “We must face reality and admit that we have made mistakes for many years,” Pashinyan said. “Our mistakes were systemic, conceptual and substantive in nature. And all of this has led to such consequences that even threaten our state institutions.”

Pashinyan spoke openly about many things in his post-war addresses to the public: from the wounded Armenian pride to the old, useless weapons acquired for the army by the previous administration. The most interesting thing was his observation about the international community’s approach to the Karabakh war. “We blame the international community for assessing Azerbaijan’s aggression against Karabakh this year as restoration of its territorial integrity,” Pashinyan said, referring to the bitter experience of his numerous calls to world leaders during the war. Indeed.

Gerard (Jirair) Libaridian, a professor at the University of Michigan, a historian and former political adviser to Levon Ter-Petrosyan, the first president of Armenia, is also one of the most prominent figures in these discussions. In an article he wrote before the war, he criticized the Armenian way of thinking and spoke about the possibility of avoiding the war. Libaridian says the Armenians are living through a very difficult period in their history. “Our fundamental problem is in the way we think,” Libaridian points out, as if clarifying with this idea the source of what Pashinyan calls systemic and conceptual mistake. “We adjust political strategy to our wishes, to what will make us feel good about ourselves.”

Libaridian says that after the war, the Armenians lost their self-confidence and optimism—they may even have lost faith in democracy. “We are a traumatized people not fully ready to accept what happened, and why,” he says. However, he adds that “we need to come to terms with it, to accept it.”

Meanwhile, Armenian President Armen Sargsyan, who says, “We are on our knees“, seems to have accepted what happened. He believes the state has collapsed. “We presented our dreams as reality,” Sargsyan said, reiterating Libaridian’s thought that “our problem is our political culture that relies on dreams rather than hard facts.”

Sargsyan stresses that the country is currently experiencing numerous crises, including economic, political and humanitarian ones, singling out the emotional and psychological crises of the Armenian people. Interestingly, in all the years of the conflict and especially during the war, the Armenian side kept saying that every member of the society was united and there was no disagreement on the Karabakh issue. Indeed, the 30-year monopoly in socio-political thought did not allow the existence of people with dissenting opinions in a society of a single ideological propaganda. Everyone has become accustomed to thinking alike, and this has become a single national identity. In this respect, we can guess what the President of Armenia means when he speaks about the post-war crisis: “Not only the state, but the image of the Armenian people as a whole has been dealt a blow. Who is an Armenian?“

Arman Grigoryan, a political scientist, political researcher and lecturer at the Lehigh University in the United States, explains how the great Armenian mistake works. He says that the whole political and intellectual field in Armenia is steeped in myths and dogmas. According to the political scientist, these nationalist myths (“Greater Armenia”, “Azerbaijanis are stupid”, “Armenian army is invincible”, etc.), the so-called “Armenian Cause”, are promoted by media and television, which have been under strong control for many years. Grigoryan comments that the media does not ensure competition for ideas but contributes to the formation and preservation of myths. His conclusion is as follows: “Our entire political discourse is drenched in such pathos-infused idiocies, which have pushed everything rational out of our public conversation. And those who stood up against it have earned the labels of enemy of the people and traitor.”

Grigoryan also emphasizes that “This ideological and cultural atmosphere is not a purely intellectual and psychological embrace of a certain narrative.” On the contrary, he says, it is rooted in certain interests. “We have an entire intellectual and cultural substratum, which depends on the stability of this narrative for its economic wellbeing. The Armenian Cause, in other words, is a business.”

As for the business mentioned by Grigoryan, as we know from the current discussions, it has already gone bankrupt. This narrative has always been built on the myth of the “Invincible Armenian Army”, and now that army has been destroyed. We learn this from the confession of former Armenian President Robert Kocharyan, the creator of both, the man who has always threatened peace with that army. “The current state of Armenia and the Armenian army does not allow anyone in their right mind to think about revenge.” The country really has no other choice.

Thus, the new discussions in Armenia have laid bare the historical causes and consequences of the 30-year-old problem that remained hidden from the Armenian mind, revealing for the first time our neighbor’s rational, objective approach to the conflict. For the first time, the Armenian socio-political thought reflected the reality freed from myths. In the current post-conflict period, during this transition to the future, the new reality should be at the root of all actions and activities, and all parties should be guided by it in shaping their approaches. First of all, taking this reality as a basis, Armenia should close the old battered page of the history book and open a new one. The Azerbaijani side should stop endless pointless debates with the old myth spinners in Armenia. Given the new discourse, peace and dialogue efforts should be built by engaging with the rational ideas that are just beginning to be heard on the other side and with people keeping up this discussion, by deepening this discourse. Furthermore, such countries as France, Germany and Canada, in other words, the international community should look at the region and international relations from the perspective of new approaches that are beneficial for Armenia, and stop acting based on the old Armenian propaganda and publicity already rejected by the Armenian society.