Built in Baku to a Ukrainian design, Azerbaijan’s new ferry is central to the country’s logistic goals and testament to its advancing production capabilities. 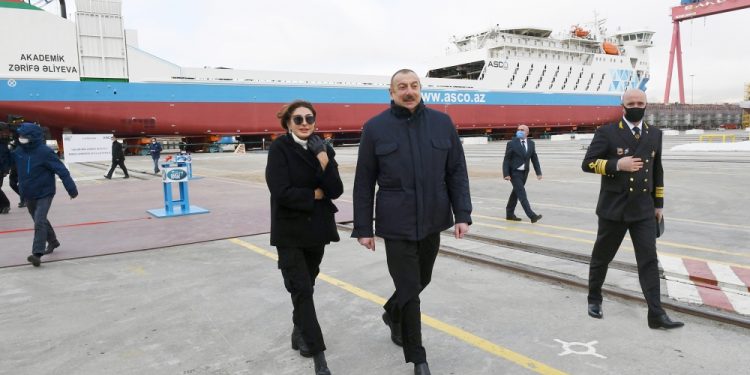 Marking an important milestone in Azerbaijan’s development of infrastructure and industry, a versatile class of rail and road freight ferry has made its debut on the Caspian Sea, writes David Tinsley from “The Motorship”.

Conceived primarily to connect the railways on the eastern and western shores of the Caspian, fringed by five countries, while also providing for heavy goods vehicles and a limited number of passengers, the 154m Azerbaijan constitutes the first ro-pax from a domestic yard.

Two such newbuilds were entrusted by Azerbaijan Caspian Shipping Company (ASCO) to Baku Shipyard in October 2016, based on a design prepared by the Ukraine’s Marine Engineering Bureau (MEB), domiciled in the Black Sea port of Odessa.

Comparatively lean in relation to length, and with a higher superstructure than other ASCO ferries, the new vessel is intended for the routes linking the modern Azerbaijani port of Alyat with Turkmenbashi, in Turkmenistan, and Aktau, in Kazakhstan.

Bearing MEB’s CNF18C designation, the 8,523gt Azerbaijan is arranged with two cargo decks, the main level being open for much of its length, while the forward part is under the accommodation block, fronting which is the wheelhouse and protected forecastle mooring deck. The lower hold, on the tanktop, is bounded by B5 longitudinal bulkheads.

Cargo handling of rail wagons and vehicles will normally be effected over the stern threshold, providing the landing for the shore linkspans. The streamlined, narrow funnel casings are located right aft on each side, ensuring unimpeded access.  An alternative means of bring road vehicles aboard, if lying alongside a berth rather than stern-to at the dedicated terminals, is afforded by a ramp fitted on the ship’s starboard quarter.

The ferry incorporates 688m of track of the Russian 1520mm gauge, corresponding to a full railfreight payload of 56 four-axle wagons of 12m length, or up to 46 railcars of 13.9m, or 44 units of 14.7m. Tank wagons carrying oil figure prominently in the trans-Caspian traffic.

One of the most significant and unusual aspects of the vessel in the context of railfreight transportation is the provision for carrying rail wagons at the tanktop level as well as on the main deck. The lower cargo deck level incorporates 208m of track, loading permutations including 16 railcars of 12m length. The main deck’s four rail lines, amounting to a linear capacity of 480m, provides for 40 such wagons.

To effect inter-deck transfers, a double-track lift is fitted at the forward end of the cargo section. This very heavy-duty piece of equipment enables two rail wagons to be handled simultaneously. The 188t-capacity cargo elevator was designed and supplied by the Singapore-based company SMS-SME.

As the tracks are embedded into the decks, flush to the surface, there is no impediment or limitation for loading road freight, which is a fast growing element of the international traffic across the Caspian. The ferry offers a vehicle laneage of 900m, enabling an intake of 50 articulated goods vehicles or road trains.

The ship’s categorisation as a ro-pax ferry derives from the incorporation of 100 passenger berths in cabins with private facilities, albeit geared primarily to truck drivers. The accommodation section includes a 50-seat cafeteria and small passenger lounge.

The after part of the superstructure mounts a full-width helicopter landing platform, and the passenger and crew safety arrangements feature two 106-person marine evacuation systems (MES) plus a pair of fully-enclosed, davit-launched lifeboats.

The diesel-mechanical propulsion system is founded on two Wartsila medium-speed engines of the well-proven 26-series. Each of the eight-cylinder models yields 2,600kW at 1,000rpm. Drive is through reduction gearboxes to a pair of controllable pitch propellers. The specification called for a sustainable speed of 14 knots in calm conditions, at 4m draught on 85% power. For manoeuvring, 350kW tunnel thrusters are fitted forward and aft, respectively. The ship has a range of about 2,500nm.

Azerbaijan represents an impressive achievement, testament to the shipbuilder’s increased scope as a local source of specialised and sophisticated tonnage, although the construction duration has been lengthy, possibly attributable in part to the manifold negative effects of the pandemic. Baku Shipyard laid the keel in December 2017, and put the vessel into the water, using the yard’s horizontal ship transfer system, two years later, in December 2019. Completion was 15 months thereafter.

Keel-laying for sistership Akademik Zarifa Alieva took place on 4 March 2018, but the launch stage was only reached at the outset of March this year, at the time of the delivery of Azerbaijan. However, it is understood that production is proceeding apace, with service entry for the second-of-class anticipated during 2021.

The Baku yard’s orderbook otherwise includes a series of 7,900dwt oil/chemical product tankers for ASCO, which was formed in 2013 from the merger of Azerbaijan State Caspian Sea Shipping Co and Caspian Oil Fleet. As part of a broader involvement by MEB in Azerbaijan’s marine endeavours, the tanker programme has also had design input from the Ukrainian technical consultancy.

Pivotal to the new ferries’ deployment is the modern port of Alyat, located 65km south of central Baku. Alyat is emerging as a fully-fledged, intermodal transportation hub and free trade zone. Investment in the port and the ships, along with highway and railway schemes, point to Azerbaijan’s strategy of strengthening its logistical role in the heart of Eurasia and along the so-called New Silk Road.