After the Armenian-Azerbaijan conflict, several meetings were held to start the delimitation and demarcation of their shared border; however, Armenia's preconditions continue to hinder the process. 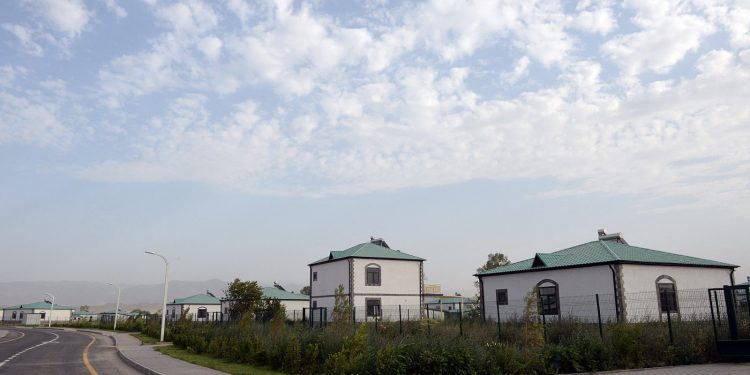 A view of the newly rebuilt village of Agali in the district of Zangilan, Azerbaijan, July 19, 2022. (AFP Photo)

After the Nov. 10 declaration that ended the Armenian occupation, one of the most important problems was the delimitation and demarcation of the state borders between the two countries. Although the border lines between the two neighboring countries had been drawn during the countries’ 70-year Soviet history, in reality, the borders were under Armenian control for almost 30 years. Following the recent 44-day war that ended the Armenian occupation, a new delimitation and demarcation process is needed. After several meetings between the leaders, finally, on May 22, 2022, the decision was made to establish a commission for the delimitation and demarcation of borders between the two neighboring countries. The first meeting of the commission was held at the border on May 24 at the level of deputy prime ministers, and plans were laid to hold the next meetings in Brussels and Moscow. The second meeting is expected in the middle of August.

The Azerbaijani side proposes delimitation and demarcation within the framework of mutual recognition of the territorial integrity and sovereignty of the parties. This includes Armenia’s recognition of Karabakh as Azerbaijani territory and its withdrawal from eight Azerbaijani villages still under Armenian occupation.

Although the Armenian side has declared that it is ready to start the delimitation and demarcation process, it is hindering that process by putting forward various preconditions. Some Armenian political figures claim that Armenia should delay this undertaking. They think that the current geopolitical situation is still against Armenia and that there is, today, tripartite cooperation between Russia, Türkiye and Azerbaijan. In particular, Armenia predicts the outcome of Russia’s war in Ukraine will not favor Moscow and that President Recep Tayyip Erdoğan will lose the 2023 elections in Türkiye. In this case, they think that Armenia will be in a stronger position against Azerbaijan. However, there is evidence showing that both the EU and the United States are also in favor of accelerating the normalization process between the two countries.

Armenian Prime Minister Nikol Pashinian has declared that, within the framework of membership of the Commonwealth of Independent States (CIS), Armenia recognizes the territorial integrity and sovereignty of Azerbaijan. Later, he stated that the Karabakh issue is not an issue of territory for Armenia but concerns the security and status of Karabakh Armenians. In the meantime, Armenian diplomatic representatives support the independence of Karabakh and assert that Karabakh seceded from Azerbaijan in 1991. Therefore, such contradictory statements reiterated by Armenian officials damaged the trust between sides.

In other words, Armenia argues that the status of the region should be determined and the Minsk Group should play an active role in this process. However, the Minsk Group has lost its working mechanism as a result of the Ukraine war, as three countries – France, Russia and the U.S. – cannot get along.

One of the most important differences between the parties on this issue is which period’s maps should be used to determine the borders. Aliyev announced that all maps for the delimitation and demarcation process will be based on those drawn up between 1918 and 1991. Both Armenia and Azerbaijan became independent nation-states in 1918, but at that time there was a conflict between the parties about the borders. The Armenian side was claiming the Zangezur, Nakhchivan and Karabakh regions at that time but, on the map of Azerbaijan submitted to the Paris Peace Conference, all three regions were recognized as the territory of Azerbaijan. As Western Zangezur was gradually transferred to Armenia in 1920–1921 by the Bolshevik government, the land connection between the Nakhchivan Autonomous Republic (NAR) and the Azerbaijan main territory was cut off. On the other hand, in 1929, the South Caucasus Central Administration Executive Board decided to transfer the villages of Nuvedi, Ernezir and Tughut to Armenia, although this decision was not approved by the Azerbaijani parliament until 1969. Nevertheless, the decision cut the connection between the NAR and the main territory of the Azerbaijan Soviet Socialist Republic.

Another claim of the Armenian side is that the Azerbaijani army violated the borders of Armenia after the Second Karabakh War and is positioned within the borders of Armenia. However, the former defense minister of Armenia reported that, in the post-war situation, the Armenian Army is advanced in some places and the Azerbaijani army in others and, after the delimitation and demarcation process, the armies will retreat. On the other hand, without delimitation and demarcation of the borders, it is impossible to know where the armies will stand.

As a result, some part of the borders remains unclarified between Azerbaijan and Armenia, which also increases military tension. This situation also facilitates provocations by those who are against Pashinian in Armenia, especially members of the Armenian Army who remain loyal to the old administration (ex-Presidents Robert Kocharian and Serj Sargsian) in a position to sabotage the peace process. The realization of the delimitation and demarcation between the two countries is the most important element in the process of peacebuilding. Perhaps the best solution in this regard is the mutual recognition of the current borders of both countries, at the time when they were accepted as members of the U.N. in March 1992. If they go back much further in history, however, this will deepen the problems between the parties and the situation will deteriorate.