A Padded Cell: The Agony of Science in Armenia

Say what you will, the Armenian thought can surprise the audience. When you read about how the depth of snow in Shirak Province has reached six meters, you cannot but admit that the world is full of "miracles". 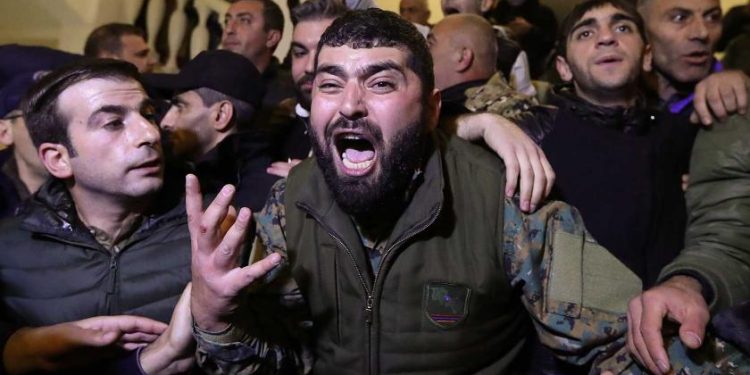 But when you hear the ravings of a pseudo-scientist “questioning another state’s right to exist” in the parliament, you cannot but realize that the world is also full of idiocy.

Translated from medical into vernacular, idiocy means classic stupidity, and handbooks in Latin refer to it using the term “imbecillitas”.

Those suffering from this syndrome have, along with signs of mental feebleness, a passion for “discoveries”, and try to force others to adopt their views. However, Vardan Voskanian, head of department at Yerevan State University, in his address to the people’s deputies decided to surprise them with a revolutionary theory, opening the Overton window.

First of all, we should remember that not everybody who has an understanding of theories and laws knows how to use their knowledge for the intended purpose. Those who don’t are either talentless or crooks stirring up a tempest in a teacup.

The Overton window Voskanian seems to have stepped through is a model in which ideas and approaches change over time. It is based on the assertion that members of the ruling elites invoke generally accepted ideas and norms, afraid to go outside the established boundaries.

The author of the concept, American jurist Joseph Overton, believed that politicians who stay within the norms avoid going outside the boundaries of the generally accepted so as not to lose the trust of the public and the electorate.

But “scientist” Voskanian, an Iranian studies specialist, by the way, is bold and fearless, and he is resolutely pushing the boundaries of maneuvering to checkmate Azerbaijan. According to his “discovery,” many questions have been voiced from the rostrum of the Armenian parliament so far, except one: “Does Azerbaijan have the right to exist?”

He believes that the very formulation of the question “whether Karabakh can be part of Azerbaijan or not” itself confirms Azerbaijan’s right to exist.

Using reverse logic, the “scholar” steps right through the Overton window, and in reality, beyond the limits of reason, to pass a verdict on Azerbaijan and outlaw it.

The speaker’s mental contortions are not only astonishing but also amusing. Now, attention, Vardan Voskanian speaks.

“We must question Azerbaijan’s right to exist… Azerbaijan as a state was created around two axes—anti-Iranian and anti-Armenian… The territory in terms of identity broke away from the Iranian world to have an identity, it must be opposed to its former identity. The anti-Armenian axis, on the other hand, is necessitated by them sharing territory with Armenia in this region. In order for Azerbaijan’s identity to crystallize, they need an anti-identity, which, unfortunately, is us.”

To say this is very abstruse and vague is to say nothing. It certainly does not sound scientific, but it definitely screams mental illness.

Of course, commenting on nonsense is not only unrewarding but also futile. Nevertheless, we must pay attention to this nonsense presented as a discovery in order to remind the audience once again about the heinous Armenian experiment that has turned real science into a cesspit.

It is unfathomable what the Armenians are doing to history as a science. Only the most “ancient, intelligent and civilized” can manipulate it and turn it into a tool to accomplish horrific goals.

The most accurate embodiment of this is the picture painted by the artistic hands of the Hay military, which the international community witnessed in the de-occupied Azerbaijani lands. No comments are necessary, the scorched land of Karabakh speaks for itself.

Despite the obvious things, the “scientist” warns Armenian society against a terrible turn of events. “Do we have the courage to tell our society that if we make a single concession, Azerbaijan will not accept the continued existence of Armenia…? Baku makes this clear, saying that should Armenia try to rebuild its security capacity, they will strike another blow at it.”

Either Voskanian is disconnected from the new reality, or he sees his audience as a herd of sheep. His bluff is dirty, as if he knows nothing about Baku’s proposals to involve the defeated aggressor in integration projects after signing a peace treaty.

To avoid new risks, he proposes solving the problem once and for all by putting an end to the neighbor’s existence. It is astounding how a grown man, who occupies far from the lowest rung of the academic hierarchy, presents nonsense as an original idea, without fear of being accused of anti-scientific practice or adventurism in general.

“This state with its anti-Armenian, barbaric, Armenophobic nature cannot have the right to exist. And we must make this issue a subject of discussion on the public plane,” the “scientist” concludes.

But wouldn’t he know about the history of the creation of his own country, who, courtesy of barbarian obscurantists, has done everything to make Armenia look like a cancerous tumor on the body of the Caucasus?!

It’s about time we took a brief trip back to the early nineteenth century, which is where Armenia began. The following is for kind attention of “scholar” Vardan Voskanian and all his like-minded associates.

Article XV of the Treaty of Turkmenchay between Russia and Persia (February 10, 1828): “His majesty Shah grants forgiveness to all of the population and officials of the province called Azerbaijan. A year’s time to be assigned from this day to those officials and citizens that must move from Iran to Russia with their families, to carry their movable property without any prevention of the government and the supremacy without any tax on their property or things for sale.”

A resettlement committee was set up to organize the resettlement of Armenians in Nakhchivan and Irevan. The settlers were assigned benefits: they were exempted from taxes and military conscription for 6 years, they were paid benefits from the contribution received from Iran.

In 1911, N.I. Shavrov wrote: “Of the 1,300,000 Armenians who currently live in Transcaucasia over one million are not the native population, but were resettled by us.”

When relocating Armenians to the Transcaucasia, special attention was paid to where to settle them. A.S. Griboyedov wrote: “From the areas seized by the Russian army—Tavriz, Khoy, Salmaz, Maragha—all Armenians must be relocated to Nakhchivan, Irevan and Karabakh Province.” This recommendation of Griboyedov was implemented.

Shavrov later wrote: “Armenians were mainly settled in the fertile lands of Elisabethpol (Ganja) and Irevan Governorate, where their number was very small. The mountainous part of Elisabethpol Governorate (Nagorno-Karabakh) and the shores of Lake Goycha were populated with those Armenians”.

Finally, another historical reference for those who are guided not by the real but by the Armenian science: “On November 21, 1827 Yegizar Lazarian, the adjutant of General Ivan Paskevich invited from Petersburg to supervise the resettlement of Armenians and staying in Tabriz, addressed the meeting of the heads of Armenian communities of Persia (Iran), saying: ‘I have good news: we have found a new homeland for you, from now on you will live in the Caucasus.’”

Evidence is what makes science compelling and powerful. But Armenian “science” is above this law, that is why the equilibrists like Vardan Voskanian never tire of juggling gibberish in order to lure uneducated new recruits into the net of insinuations.

In his revelation, he took a step into the bosom of the absurd, calling on the parliament and the public to challenge the country that had crushed Armenian fascism by forcing it to peace. But to foolish daredevils like Voskanian, Azerbaijani lessons were not enough.

Physically resembling an ultimate fighting athlete, the “scientist” certainly distinguished himself, but not with his intellect, but with his imbecility, exposing his classic idiocy in full view.

He should have opened a window to the world of historical mind instead. But apparently, it takes more gray matter than was available, hence the Overton window.