Rapidly changing geopolitical realities in the Eurasian space have played the role of a trigger, strengthening transport cooperation of Azerbaijan, Türkiye, Kazakhstan, and Georgia, increasing the volume of transshipment of cargo along the Trans-Caspian route. 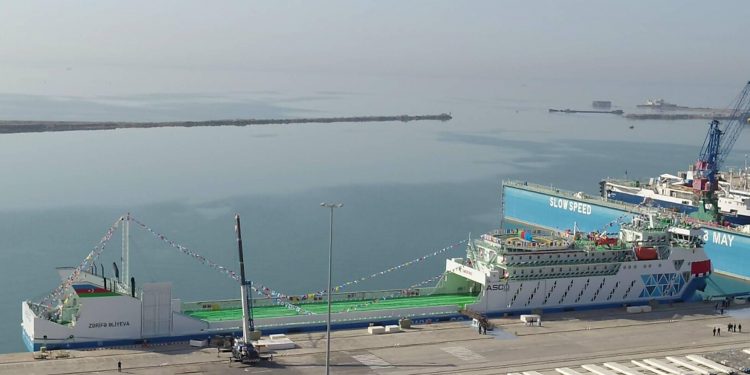 Against this background, the transit attractiveness of the Baku International Sea Trade Port increases significantly, the logistics capabilities of which will soon be expanded through a new terminal for mineral fertilizers, and in the future – a new container terminal. The favorable environment in the regional transit market and growth of transshipment through the Baku port best accompanies the development of the Alat free economic zone, the opening of which is scheduled for this month.

With the commissioning of the Baku-Tbilisi-Kars rail corridor (BTK) in October 2017 and the formation in the same year by Kazakhstan, Azerbaijan, Georgia, and Türkiye of the Trans-Caspian International Transport Route, the transit of non-commodity, mostly multimodal containerized cargo through our republic is increasing year by year. Over the past 4.5 years, the Trans-Caspian route has become a major component of the Transport Corridor Europe-Caucasus-Asia (TRACECA), while this route has become the regional base of the Chinese transit corridor “One Belt, One Road”. And with the outbreak of the war in Ukraine and anti-Russian sanctions, the Trans-Caspian is gradually pulling the bulk of the transit traffic, becoming the basis of the logistics of the entire “Middle Corridor”, connecting shippers of China, Central Asia, Türkiye, and then the Middle East and Europe.

Kazakhstan and Azerbaijan are becoming the key beneficiaries of the changing transit conditions in the Eurasian region. According to the forecasts of the port of Aktau, transportation volumes along the TMTM route are planned to increase sixfold this year – up to 3.2 million tons. In turn, according to the estimates of CJSC Azerbaijan Railways, in 2022 Azerbaijan is expected to see a threefold increase in the movement of containers along the Middle Corridor, including in transit operations.

And together with the cargo carriers – Azerbaijani and Kazakh fleets of ferries, dry cargo ships, feeder vessels, as well as the railway departments of the two countries, the bulk of transit operations will fall on the main harbors of the eastern and western shores of the Caspian Sea – the ports of Aktau and Alat. Therefore, in the near future, Kazakhstan is planning to create a container hub on the basis of FEZ “Sea Port Aktau”, this project will involve foreign consultants and investors, including such international container operators as PSA International, Maersk, and MSC. The plans include adding four ferries to Kazakhstan’s merchant fleet on the Caspian Sea, and in 2022-2025 it is planned to build second tracks and electrify Dostyk – Moyinty railroad section. All this will increase the speed of container trains and multiply the capacity of seaports and the volume of cargo transshipment by ferries.

The plans of Baku International Commercial Seaport are no less ambitious: already in January-May 2022 the cargo flow has increased by 20%, up to 2.2 million tons. In particular, during the reporting period transshipment of heavy-duty trucks (TIR) grew by 16% up to 17.8 thousand units, railway wagons by almost 19% – up to 14.3 thousand units. As in previous years, the main volume of cargo is containers, the volume of which during five months increased by 22% up to more than 21 thousand pieces. Taking into account the expected multiple growths of transit cargo traffic on the Trans-Caspian route, the company intends to expand the potential of the port infrastructure.

According to the forecasts, in the medium term transshipment of containers in the port will reach the figure of 200-250 thousand TEU per year, and bulk cargo – 1 million tons per year, so the creation of additional storage infrastructure for storage and handling of bulk cargo is planned together with the container terminal. The most important area of port infrastructure development is the expansion of mineral fertilizer handling capabilities, the transfer of which from Central Asian countries has been growing steadily since 2018. Thus, in January-May this year 606 thousand tons of bulk cargo were transported, of which more than 90% or 558 thousand tons were fertilizers. This figure is expected to increase by 22.5% by the end of this year, reaching 1.3-1.4 million tons.

The rush in demand comes amid rising gas prices in Europe – Africa, South America, and Asia have reduced production of nitrogen fertilizers and their supplies from Russia and Belarus have collapsed amid the sanctions confrontation. Given the food crisis, prices in this segment are now three times higher than last year. These circumstances encourage Turkmenistan, Kazakhstan, and Uzbekistan to increase supplies of urea, sulfur, phosphate, and other fertilizers to foreign markets. And the lion’s share of these supplies is transited through Azerbaijan: during the whole of 2019 about 167 thousand tons of fertilizers were transported through the port of Alat, and the volume has more than tripled in five months of 2022. Moreover, taking into account the global situation, the dynamics will consistently increase, since due to the war in Ukraine, the entire flow of mineral fertilizers will be sent in transit through Azerbaijan.

In order to optimize management of such a substantial transit flow, construction of a special terminal for transshipment and storage of fertilizers started in Alat port late last year: this facility is to be put into operation in late 2022 or early 2023, and it will be the most powerful terminal on the Caspian Sea that can handle the growing volumes of fertilizers coming from the ports of Aktau and Turkmenbashi. With the commissioning of the new terminal, Alat port plans to handle about 2.5-3 million tons of mineral fertilizers annually in the medium term. The availability of a large terminal in Azerbaijan will make it possible to attract local and international trading companies capable of independently purchasing, storing, and re-exporting large batches of fertilizers depending on global demand and price conditions.

The global reformatting of transit routes in the Eurasian area and the manifold increase in cargo handling at Baku seaport that it caused, creates unique advantages for the work of the Alat free economic zone being created within the port complex.

In the past few years on the territory of the future free economic zone, which according to the general plan covers 850 hectares, work on the construction of primary energy and utility infrastructure, roads, and optical communication lines have been carried out, and preparations for the construction of other facilities have been made. In the first stage, an automated logistics base will be functioning here, where warehouses will be created on a plot of 60 hectares, in the second stage 10 thousand square meters of objects for office needs will be put into operation, which will house the FEZ administration, customs services, and other structures. In the future, the zone will be created to serve 100 thousand standard containers. At the end of last month, Azerbaijani Prime Minister Ali Asadov familiarized himself with the work being carried out in the Alat FEZ, assessing the pre-launch readiness of its infrastructure.

In recent years there has been some progress in attracting a number of European, Chinese, Turkish, Pakistani, and other companies to participate in the projects of the formed FEZ. Just a few days ago a memorandum of cooperation was signed between the Alat FEZ and the Hualing Kutaisi free industrial zone in Georgia. And today, against the background of the expected multiple growths of cargo transshipment along the Middle Corridor, this interest has increased even more, and the free economic zone being created in Azerbaijan is considered by many Asian companies as a bridge to the Russian and several other markets of the post-Soviet region.

The interest of international companies and forwarding firms of the region’s countries is quite justified since the advantages of the new FEZ can also include exemption from VAT, customs duties and taxes on imports and exports there, the elimination of personal income tax for local personnel, social security payments and similar fiscal payments for foreign qualified personnel. Equally important is the availability in FEZs of affordable rental space and comparatively affordable utility bills.

World practice shows that the exemption of entrepreneurs from fiscal payments reduces the cost of production by about 40%, which, in turn, increases the export potential, boosting the competitive opportunities in various markets and eventually allowing multiple increases in trade turnover. In perspective these measures contribute to the transformation of Alat FEZ and the port functionally related to it into the largest logistic hub of the Caspian region, which will serve not only transit traffic but also allow to store and process cargoes (repackage for local markets) for their subsequent sale in third countries, increasing the added value of goods. The Alat FEZ was originally designed with the expectation of creating an industrial cluster for the processing and light industries here. Moreover, according to experts, in the medium term, the implementation of logistics and manufacturing projects within the FEZ is able to attract about $1 billion of foreign investment.