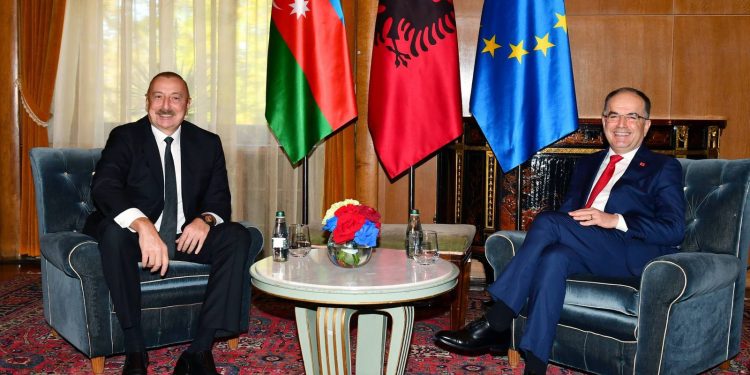 The official visit can be characterized as opening a new page in bilateral relations between two countries. It is worth noting that diplomatic relations between the Republic of Azerbaijan and the Republic of Albania were established on September 22, 1993, and over the past 30 years, two countries have been cooperating in various fields such as culture, trade, security and energy. Also, political contacts between Baku and Tirana are at a high level as Albania has been always supporting sovereignty and territorial integrity of Azerbaijan. Specifically, the Albanian position on the Karabakh issue has formed the backbone for extending bilateral relations between Baku and Tirana, writes Shahmar Hajiyev, senior advisor, Center of Analysis of International Relations.

Touching upon the economic relations, it should be noted that trade turnover between two countries increased by 2.78 times, including import by 2.69 times and export by 3.14 times from January to September, 2022. There is potential to deepen bilateral relations, therefore the state visit opens new opportunities for strengthening high-level political dialogue and opening the Embassy of Azerbaijan in the capital Tirana.

During the visit to Tirana, President Ilham Aliyev discussed with president Bajram Begaj bilateral cooperation in the field of energy, infrastructure, tourism, agriculture and industry. Towards this end, Tirana is interested in deepening economic cooperation with Baku, especially in the energy sector. Albania is a country with limited natural gas production, and the country is almost entirely dependent on hydropower for its electricity supply. The country produces a small amount of gas, mostly used in oil production and the refining industry. So, energy sector of Albania is mainly reliant on hydropower, and the imported of fossil fuels. But Tirana is highly interested to develop the natural gas sector as in March 2021, US companies Excelerate Energy L.P. and ExxonMobil LNG Market Development Inc. signed a “Memorandum of Understanding” with the Albanian government to conduct a feasibility study for the potential development of a liquefied natural gas project in Vlora, consisting of an LNG import terminal, conversion or expansion of the existing Vlora thermal power plant, and establishing small scale LNG distribution.

As the country looks forward to supporting its energy security in the long term, Albania wants to diversify its energy supply by using renewables, LNG and pipeline natural gas. Thus, another important source of natural gas supply could be Azerbaijani natural gas via the Trans Adriatic Pipeline (TAP), which is the European leg of the Southern Gas Corridor (SGC). It is worth noting that Albania cooperates successfully with Azerbaijan in the framework of the interregional SGC project. As noted by President Begaj: “Cooperation in the field of energy is an essential direction for his country. The implementation of the TAP project is of strategic importance, and both countries have successfully cooperated on this matter”. It should be underlined that the “Intergovernmental Agreement on TAP project” was signed among Albania, Italy and Greece in February 2013, and the groundbreaking ceremony was held on 17 May 2016. The commercial operations commenced at the end of 2020. In addition to benefiting from its transit opportunities within the framework of the TAP project, the implementation of the project has necessarily contributed to the extension of employment rate in Albania. Besides, the project provided an increase in GDP and budget revenues for Albania.

Also, on 6 July 2021, Trans Adriatic Pipeline (TAP) AG, the Albanian Ministry of Infrastructure and Energy and Albgaz Sh.a. signed a Cooperation and Handover Agreement on the Fier South Facility. TAP will design, procure and construct the Fier gas exit point, a multimillion Euro investment in the country. The new facility is a significant milestone for Albania’s gasification, as it will enable an interconnection point between the TAP transportation system and future gas infrastructure in Albania.

Meanwhile, Albania is also interested in Azerbaijan’s active participation in the country’s gasification process. Discussions between the Azerbaijani and Albanian governments about Azerbaijan’s State Oil Company (SOCAR) participation in the development of Albania’s energy infrastructure have been continuing for a long time. In this sense, Albania and Azerbaijan signed a preliminary agreement in December 2014 to cooperate in developing an Albanian gas grid, and SOCAR planned to draft a feasibility study on an Albanian and Montenegrin gas infrastructure plan. Later, Albania and Azerbaijan signed a “Memorandum of Understanding providing cooperation in the development of a master plan for Albania’s gasification”.

In view of developments in Albania, Deputy Prime Minister and Minister of Infrastructure and Energy Belinda Balluku announced on social networks that “ Very soon details about the plans of the near future with SOCAR, one of the world’s companies of excellence in the field of gas”. All the aforementioned confirms that the TAP pipeline supports the energy security of all involved countries. The pipeline supports gasification and the possibility of developing an underground natural gas storage facility in Albania. In addition, the TAP pipeline can provide an exit point to the planned Ionian Adriatic Pipeline (IAP) to link to the markets in Croatia, Albania, Montenegro, and Bosnia and Herzegovina.

In the end, the meeting between Azerbaijani and Albanian presidents was very fruitful for both countries as the state visit gives a fresh and strong impetus into the common development and prosperity. Successful cooperation will continue with new dynamics in the field of energy, infrastructure, tourism, agriculture and industry in 2023. Last but not least, SOCARS’s participation in energy projects in Albania is interesting for Azerbaijan to expand the geography of its gas export. For Albania, Azerbaijani natural gas is highly important for its long-term energy security.