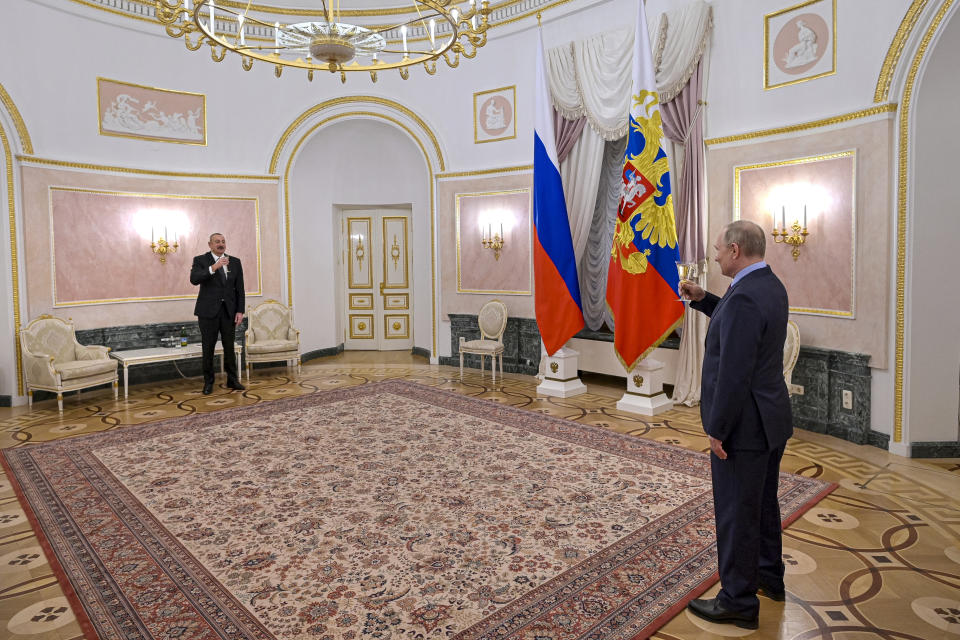 There, he and Putin signed a 43-point agreement that gave the Azerbaijani leader three of the things he has sought the longest—formal Russian backing for Baku’s position on Karabakh, Moscow’s recognition of Azerbaijan as Russia’s primary and most reliable partner in the South Caucasus, and also Russian acceptance of Azerbaijan’s multi-vector foreign policy. As such, in Baku’s view of the document, this new agreement with Moscow will not threaten Azerbaijan’s relationships with Turkey, the European Union and the United States.

But almost immediately, the accord drew withering criticism from opposition politicians and analysts in Azerbaijan (see EDM, February 25). The sources of reproach included the timing of the signing of this agreement, the way Moscow appears certain to use it to keep Baku quiet while it moves against Ukraine, and specific provisions of the document that limit Azerbaijan’s ability to expand its military cooperation with Turkey and may force Baku to support Russia against Western sanctions. The critics bemoaned that Aliyev had yielded far too much for far too little, without sufficient iron-clad assurances.

The February 22 declaration (Azertag.az, Kremlin.ru, February 22) certainly gives Aliyev something he has long sought for regarding Karabakh. According to Kamal Makili-Aliyev, an Azerbaijani specialist on international law, “Russia has never at the top level officially and explicitly confirmed Azerbaijan’s territorial integrity on any occasion” (EurasiaNet, February 24). Now, it has; and for Baku, that means that Russia recognizes Karabakh as an inalienable part of Azerbaijan. Moreover, Putin has pledged to fight any secessionist attempts by Armenians or others, a promise it has not made before at this level and one that Azerbaijani officials are especially pleased by (EADaily, March 2). Both these promises give Azerbaijan the whip hand in any future talks with Armenia about the region.

Moreover, the accord, in the view of pro-Aliyev commentators in Baku, represents a victory for Azerbaijan because it shows that President Aliyev has now managed to obtain formal acknowledgement from the Kremlin for something the Azerbaijani president has long insisted upon—that it is better for the Russians to have “as a reliable and predictable partner, an independent and strong leader” in the South Caucasus rather than “a vassal and satellite” like Armenia, which will betray them on occasion in pursuit of international support elsewhere. Indeed, these commentators say, “the only sincere and reliable ally of Russia in the region is not Armenia or Georgia but only Azerbaijan”; and Putin now recognizes this (Haqqin.az, February23). And finally, Baku was more than happy to pocket Putin’s acknowledgement, in both the document itself and his remarks on its presentation, that Moscow recognizes Baku has its own independent foreign policy and will pursue it rather than defer on all matters to the Russian Federation (Rosbalt, February 24; TASS, February 22).

But both the timing of the signing of the accord and some of its specific provisions have sparked disapproval in Azerbaijan. Aliyev and others have insisted that the document was under preparation for more than a year (EADaily, March 2; APA, February 24); and this is quite likely. Yet the decision to go ahead with the Aliyev-Putin meeting given events in Ukraine strikes few as being coincidental (EurasiaNet, February 24). On the one hand, there has been talk that Moscow might follow its recognition of the two breakaway Russian regions with recognition of Karabakh as an independent state, something Baku wants to forestall at all costs (IARex, February 21). And on the other hand, Russia sought to ensure that Azerbaijan would not join the West in speaking out against Moscow over Ukraine and that Baku would even help Russia cope with any new sanctions (Kavkazsky Uzel, February 23).

Azerbaijani critics have been even more sweeping in their condemnation of the provisions of the accord. One opposition parliamentarian said that its text subordinates Baku to Moscow. An Azerbaijani political commentator added that it will open the way for Russia to intervene on a wide range of Azerbaijani domestic and foreign policies, including relations with Turkey and the West, and, thus, compromise Azerbaijan’s sovereignty and independence. Others pointed out the document could undermine Azerbaijan’s relations with Turkey both politically and in the military sphere by opening the way for Russia to object to further moves to bring the Azerbaijani military into conformity with North Atlantic Treaty Organization (NATO) standards, something Moscow views as threatening to its interests (Kavkazsky Uzel, February 23). And still other Azerbaijanis see a danger in Aliyev’s promises to maintain the position of the Russian language and Russian culture in their country as a sign that Baku will be more deferential to Moscow than it should be (Rosbalt, February 24).

As this debate was taking place, Azerbaijanis were remembering an event that still agitates them and has the potential to reorder politics in that country. Thirty years ago, on the night of February 25–26, 1992, Armenian forces broke into Hojali and killed 613 of its civilian residents, including men, women and children, in what most Azerbaijanis describe as an act of “genocide.” The attack was organized by two Armenian politicians who subsequently became presidents of Armenia and close allies of Moscow; while the Armenian soldiers who took part ended up being relocated to Russia. They have never been held accountable, and this year, as before, Azerbaijanis are demanding that they be brought to justice. Anger about this inside Azerbaijan is far stronger than any support for the new agreement with Moscow (Vestik Kavkaza, February 25). The Hojali massacre and its memory are a clear example of the ways in which such events, no matter how long ago, can trigger emotions that even the most carefully crafted diplomatic language, of the kind on display in the Aliyev-Putin agreement, cannot paper over. So however important the accord between the two presidents is as a signal of intentions, it may or may not be realized given the powerful sentiments it stirs up or must overcome if its provisions are to be implemented.