Iran's ongoing threats to both Israel and Azerbaijan should serve to further galvanize the relations between Jerusalem and Baku. 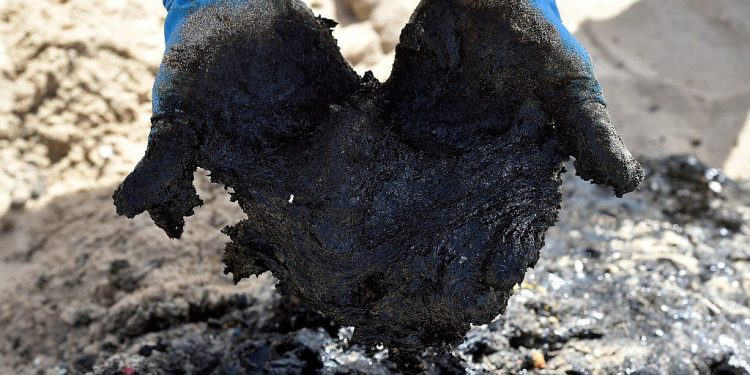 Was the spill an act of environmental terrorism? | File photo: EPA/Wael Hamzeh

As vessel tracking data confirmed that the tanker which caused Israel’s most grave environmental disaster was carrying 90,000 tons of crude oil from Iran to Syria, many speculate that Iran intentionally polluted Israel’s economic waters.

Israeli Environmental Protection Minister Gila Gamliel described the act as environmental terrorism, noting that the tanker’s Automatic Identification System (AIS) was turned off as it traveled through the Suez Canal and neared Israel in February, where it dumped its oil before traveling to Syria with its AIS on again, before unloading the cargo onto another ship by Syria’s coast.

The oil spill, which resulted in an enormous amount of sticky tar appearing on Israel’s beaches and shores, threatened Israel’s animals, potable water and seafood, and required a mass clean-up effort that cost Israel nearly $14 million.

The Iranian threat to Israel has been growing since the Iranian Revolution in 1979. However, Iran was not always considered a threat – it was actually the second Muslim-majority country to recognize Israel as a sovereign state upon its establishment in 1948 and supplied Israel with oil after the Six-Day War in 1967.

Today, Israel imports 40% of its oil from another Muslim-majority country – Azerbaijan, the nation with the world’s second-largest Shi’a population%age, following Iran.

Azerbaijan deals with its own Iranian threats. Iran is Azerbaijan’s southern neighbor. Living in northwest Iran, 20-30 million Azerbaijani Turks, who have a Turkic rather than Persian language, culture, religion and customs that diverge from the rest of Iran, are deprived of freedom of expression in education, courts, government and the army. In attempts to return Azerbaijan to its Persian roots, the Tehran regime has carried out terrorist attacks in Azerbaijan, including by dispatching terrorists into Azerbaijan to bomb Israeli and American facilities.

While Iran allegedly uses oil as an environmental weapon, Azerbaijan is currently working to undermine Iranian influence through its major oil project, the Southern Gas Corridor, which spans 2,200 miles across seven countries and links three pipelines.

Though it is unclear if Israel will be involved in the Azerbaijani-led project, it is understood that with or without Israel’s direct participation, the Jewish state will benefit from the security and economic strength that results from Azerbaijan’s expanding influence. The project is poised to restructure Europe’s oil imports away from Russian – and by extension, Iranian – dependence.

Iran’s ongoing threats to both Israel and Azerbaijan should serve to further galvanize the relations between Jerusalem and Baku, which have engaged in deep diplomatic and economic ties since 1992, long preceding today’s growing tide of rapprochement between Israel and other Muslim-majority nations through the Abraham Accords.

Indeed, one of the ways that Azerbaijan can continue to buttress itself against Iranian aggression is through Baku’s strong relationships with Israel, the US and Turkey. But it is more than mutual threats that bring Israel and Azerbaijan together. While Iran leads in anti-Semitism, Azerbaijan leads in religious tolerance. Members of the centuries-old Jewish community of Azerbaijan – including those living in Qırmızı Qəsəbə (Red Village) in the Quba district, the only all-Jewish village outside of Israel and the US – affirm that their country protects the rights of all religious minorities in a region where persecution is the norm; they also report that they do not experience anti-Semitism in Azerbaijan.

The Azerbaijan-Israel relationship has also expanded in the aftermath of last fall’s war between Armenia and Azerbaijan, through several humanitarian initiatives. In early March, Israeli doctors flew on a private plane to Azerbaijan, undertaking a humanitarian mission to operate on 150 Azerbaijani soldiers needing oculoplasty, including procedures such as eye socket restoration and implanting prosthetic eyes. Israel has also offered to help rebuild and invest in the Nagorno-Karabakh territory, where Azerbaijan regained control following its war with Armenia.

Although they represent the two countries with the largest Shi’a Muslim populations globally, Iran and Azerbaijan have radically different approaches to Israel – especially in their use (or misuse) of oil. As Iran continues to threaten Israel, the Azerbaijani-Israeli relationship should only continue to grow.