The geopolitical situation in the Caucasus between Armenia and Azerbaijan has hindered the development of rail links in the region. 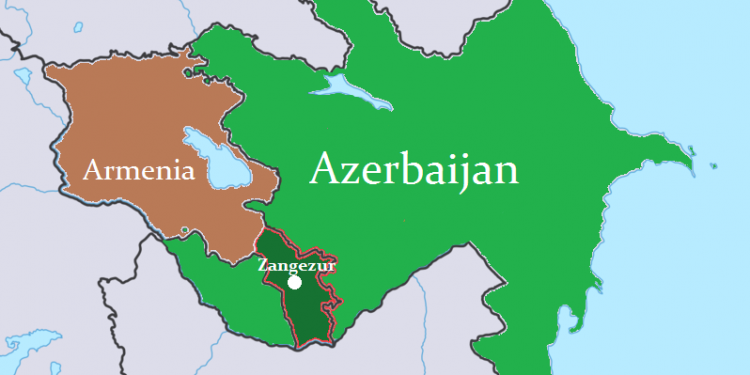 The rivalry between the two countries has also posed problems in developing international routes like the North-South International Transport Corridor. However, Azerbaijan’s president Ilham Aliyev has lately appeared open to a rail cooperation with Armenia on the Zangazur (Nakhchivan) corridor axis, which could unlock transit potential in many directions.

Earlier in mid-December, Azerbaijan’s president attended several political meetings in Brussels. The meeting with NATO Secretary-General Jens Stoltenberg was among the most fruitful since the press conference it produced resulted in some interesting insights concerning rail links in the Caucasus region. Specifically, it seems that Armenia and Azerbaijan are closer to a solution than ever.

RailFreight.com has reported on the possible development of the Zangazur rail link earlier in 2021. The Nakhchivan rail link, as it is also known, was among the prerequisites for the trilateral ceasefire agreement between Russia, Armenia and Azerbaijan that ended the Nagorno-Karabakh war between the latest two.

The link is presented as beneficial for all the powers surrounding the Caucasus. It will provide access for Azerbaijan to Nakhchivan, which is its western exclave along the border with Iran. For Armenia, it means that the country will acquire a rail connection with Azerbaijan via Nakhchivan and will also become a transit country for North-South routes. Finally, for Russia and Iran, this rail link means that the countries will resolve one of the main bottlenecks to develop the North-South International Transport Corridor.

An opportunity for the region

During a press conference in Brussels, Azerbaijan’s president Aliyev stressed that “in terms of connectivity, the integration of regional transport links is indeed a great opportunity for the region because the Zangazur corridor is not only for our access to the Nakhchivan Autonomous Republic but also for the railway connection of Armenia with Iran through the Nakhchivan Autonomous Republic.”

Armenia currently does not have rail links connecting it with Iran. In fact, the lack of such a link hinders the resolution of connectivity problems between Russia and Iran since it does not provide any other alternatives other than transiting through Azerbaijan. “Armenia gets a railway connection with Iran through the Nakhchivan Autonomous Republica and Russia through Azerbaijan. Today they do not have such a railway connection. This can create a positive atmosphere in the region, benefiting everyone. I think that the correct assessment of these opportunities is critical in terms of planning our peaceful future”, mentioned Aliyev.

In Brussels, a trilateral meeting between Aliyev, the president of the European Council Charles Michel and prime minister of the Republic of Armenia Nicole Pashinyan focused precisely on this topic. According to Aliyev’s official presidential website, the three parties discussed the possibilities of the Nakhchivan rail link and how they could reach a shared understanding and a solution. On top of that, they also met unofficially with French president Emmanuel Macron and focused on similar topics.