What awaits the Armenia-Azerbaijan relations in 2022?

Notwithstanding occasional flare-ups and infrequent deadly clashes, the past year marked a remarkably peaceful and promising period in the post-Soviet history of the Armenia-Azerbaijan relations. 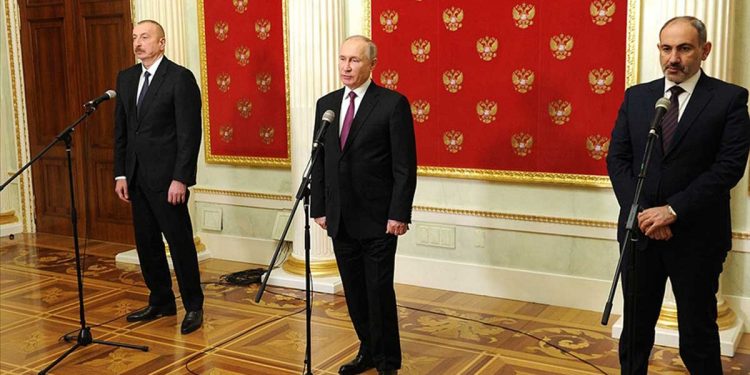 Meeting three times via the mediation of third parties, the leaders of the two countries discussed the ways for normalization of their relations and gave important peace messages. The regional situation has passed a long path from the notorious August-2019 speech of Armenian Prime Minister Nikol Pashinyan in Karabakh where he, in a populist manner, shouted “Karabakh is Armenia, period”.

The Sochi summit of the leaders on November 26 formalized the peace efforts of the sides over the last year where Armenia and Azerbaijan basically recognized their international borders and launched the negotiations on their delimitation and demarcation. In late 2021, Prime Minister Pashinyan’s reference to the United Nations Security Council (UNSC) resolutions of 1993 as the inevitable legal basis for the talks about the status of the Karabakh region confirmed that the relations between Armenia and Azerbaijan have entered a qualitatively new stage. It is important to recall that the four resolutions adopted by the UNSC amidst the first Karabakh war, the international community recognized Azerbaijan’s territorial integrity with Nagorno-Karabakh being part of it. Referring to the content of peace negotiations between Baku and Yerevan during the rule of his predecessors, Pashinyan said that Karabakh’s status can only be determined within the constitution of the Republic of Azerbaijan.

This, along with the positive accomplishments in the talks over the unblocking of regional transportation and communication channels in line with the trilateral [Armenia, Azerbaijan, and Russia] ceasefire accord of November 10, 2020, has created an important ground to believe that 2022 promises more peace and security to the South Caucasus. On this account, the following predictions for the Armenia-Azerbaijan relations can be suggested for the upcoming year.

First and foremost, the format of negotiations is expected to remain as it has been since the latest war: i.e., the major decisions are likely going to be made within the trilateral format of the Armenia, Azerbaijan and Russia leaders. Since the end of the 44 Day War, Moscow appears to be both supporter and guarantor of the agreements over the most conflictual issues between Baku and Yerevan and does not seem interested in losing its critical role in this process in the foreseeable future.

Along with that, there might be contacts and meetings between the leaders of the two countries mediated by other actors, for instance, the European Union. The Brussels summit of Azerbaijan’s President Ilham Aliyev and Prime Minister Pashinyan on December 14 demonstrated the EU’s capability to bring the two parties to the negotiating table and encourage them towards negotiated solutions to the existing disputes on their agenda. However, although the European Council President Charles Michel succeeded to facilitate a direct meeting of Aliyev and Pashinyan without the mediation of third parties, the regular direct contacts and meetings between them will take some more time to become possible.

Secondly, Baku and Yerevan are expected to announce the establishment of working groups for the delimitation of the Armenia-Azerbaijan border next year. According to the results of the Sochi summit, an international commission of the two countries is expected to be founded with the participation of Russia. The progress towards this end would further stabilize the border between Azerbaijan and Armenia and as such prevent the reoccurrence of violent escalations of 2021. The fact that this process is fully supported by all three countries is significantly important and promising for regional peace and security.

Third, Baku and Yerevan are likely to remain on a good track also in the negotiations over unblocking of transportation and communications in the region. The results of the past year provide a favorable basis for this process. It is worth recalling that the leaders of the two countries agreed on the opening of a railway between the western regions of Azerbaijan and its Nakhchivan exclave through the southern Armenian territories at the Sochi summit, after a long period of tug-of war. They have already prepared a timeline and estimated the costs for the reconstruction of this railway. The sides have, nevertheless, yet to reach an agreement about the technical details of a highway along that path which Azerbaijan calls “Zangazur corridor” with a reference to the historical name of the southern Armenian region. We can expect a breakthrough in this direction for next year. In parallel, Armenia is going to get railway access to Iran and Russia via the Azerbaijani territories which will create some degree of interdependency between Armenia and Azerbaijan providing more incentives for peacebuilding in the region.

Fourth, the 3+3 regional cooperation initiative, standing for Armenia, Azerbaijan, Georgia plus Russia, Iran, Turkey and proposed after the 44 Day War, is expected to become an active platform for the discussions and solutions of regional problems in 2022. A summit of the participating countries is possible if all the parties remain interested in this format. Although Georgia is not likely to decide joining this platform next year due to the country’s strained relations with Russia, Tbilisi will have to find a way for engagement with this group if it becomes a real geopolitical force in the region. The 3+3 regional grouping has such a potential as the participating countries are either already in friendly relations with each other or willing to build such relations soon. The rapprochement between Baku and Tehran after the recent tensions in their relations and the progress in the normalization of the Turkey-Armenia relations will make a good contribution to the 3+3 initiative, as well. Hence, this initiative could even serve as a useful platform for the normalization of the Russia-Georgia relations helping the sides resolve their conflicts peacefully.

What is more, the developments of the past year and the prospects for the upcoming year reaffirm that the liberation of the occupied territories of Azerbaijan in the 44 Day War of 2020 has created a unique chance for peace not only in the South Caucasus but also amongst the countries neighboring the region. We hope that it will finally be possible for the region to restore peaceful co-existence after the long years of conflicts and violence. This historic chance for peace should not be taken for granted and needs to be protected against the destructive forces that threaten to undermine the post-war peace process.