Armenia and Azerbaijan’s court battle could damage hopes for peace

With the bar for success high, proceedings will likely turn into a forum to air grievances, throw mud at one another, and ultimately reinforce division between Armenians and Azerbaijanis. It is the exact opposite of what is currently needed; lawfare rather than diplomacy. 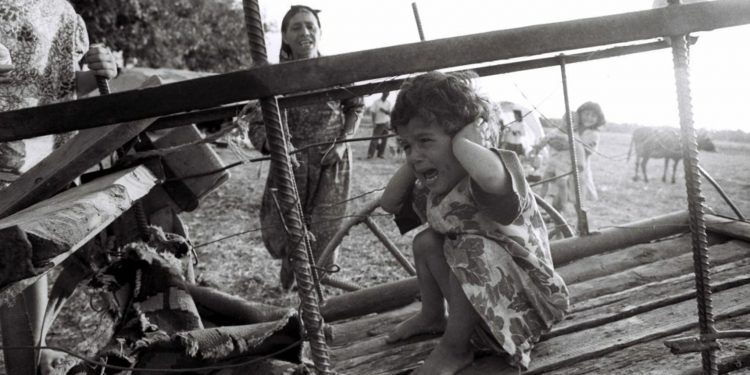 Evacuation of Azerbaijani refugees from Karabakh, who escaped imminent death at the hands of Armenian military forces.

It may be true that there can be no peace without justice. So too, however, can law frustrate peace processes. Unfortunately, proceedings at the world’s court today will likely fall into the latter.

The International Court of Justice (ICJ) will hear the first dispatch from the case of Armenia v. Azerbaijan. It follows a forty-four-day war between the two last Autumn. Less than a month ago, Armenia instituted proceedings against Azerbaijan. It argued that Azerbaijan was in breach of the Convention on the Elimination of Racial Discrimination (CERD). Inevitably, little over a week later, it prompted a counterclaim from Azerbaijan accusing Armenia of breaches of the same treaty. The two cases have been joined and will now be heard as one.

That there are deeply held hatreds is clear—and unsurprising. The two countries have been official enemies since the first Karabakh war in the 1990s. As the Soviet Union collapsed, the two went to war over Nagorno Karabakh—a province internationally recognized as Azerbaijan but with a significant Armenian population. The result of the six-year conflict was Yerevan’s occupation of Nagorno-Karabakh and seven of its surrounding districts.

A million refugees, mostly Azerbaijanis, were created in the tumult. Following an uneasy ceasefire, national borders were closed. Where once Armenians and Azerbaijanis worked and lived together, contacts between citizens ceased as the conflict froze. In this void, a distorted myth of the enemy formed on both sides of the line of contact.

Individual facts and incidents could support such a picture. As both submissions draw out in detail, heinous acts were committed both before and during last year’s conflict. But for every example of wrongdoing committed by one to the other, there is an equally damning counterexample—whether civilians killed in shelling or dehumanizing and hateful actions.

However, it is questionable if the ICJ is the right forum for two linked reasons. First, for Armenia, it must prove that state-directed policies affected Armenians in Azerbaijan. But this is limited only to areas over which Baku exercised effective control. In other words, it will exclude what Armenians once called Artsakh, the occupied territories of Azerbaijan. Given the 1990s churn of refugees, very few Armenians lived in other parts of Azerbaijan; few if any Azerbaijanis remained in Armenia.

A Russian-brokered ceasefire in November formally handed effective control of most of the occupied territory back to Azerbaijan. By then, all Armenians had fled the approaching forces. There have, therefore, been very few Armenians under Baku’s effective control either before last autumn’s conflict or after whom discriminatory evidence can be based.

Despite being the second mover, it may be that Azerbaijan has the better case in this regard. Azeris expelled during the first war were prevented from returning home by the occupying forces. Though Armenia will claim these to be the actions of an unrecognized and autonomous statelet, a 2015 European Court of Human Rights ruling established the so-called Republic of Artsakh was under the effective control of Yerevan.

Whatever the merits of either case, they will still be difficult to prove under the CERD. It raises the second objection to choosing the court: with the bar for success high, proceedings will likely turn into a forum to air grievances, throw mud at one another, and ultimately reinforce division between Armenians and Azerbaijanis. It is the exact opposite of what is currently needed; lawfare rather than diplomacy.

A ceasefire stopped the guns in November. But a peace treaty is yet to be signed. For that, reconciliation between the two peoples is ultimately essential. As befits legal proceedings, only evidence that supports each painting the other as the iniquitous party will be brought to bear. That will only play into the ultra-nationalists’ hands on both sides of the border. They have always argued that the fundamental incompatibility of Armenians and Azerbaijanis means any compromise or concessions toward a peace settlement is not worth it. The legal arguments will reinforce that worldview.

What shall be missed is the long period of peaceful coexistence and collaboration before the first Karabakh war. But it is these times that must be remembered to move forward into a more self-assured future.

It makes the timing of this case awkward. Leaders in both Azerbaijan and Armenia have been talking up the prospects of a peace settlement that would benefit all. The unlocking of borders and reconciliation within grasp. But arguments that buttress ideas of incompatibility are inimical to the demands of reconciliation. Against this background of din, it will be difficult to establish trust.

That makes the case an expensive demonstration of hatred, which could pose greater costs on a future peace.

Ben Keith is a leading barrister specializing in Extradition and International Crime in post-Soviet States.