Armenia descends into chaos: people trust no one

Taking advantage of the sentiments of the thousands of protesting crowds triggered by Nikol Pashinyan saying he was ready to sign a "document of capitulation", opposition leaders in Armenia tried to organize a new wave of street protests demanding a change of government. 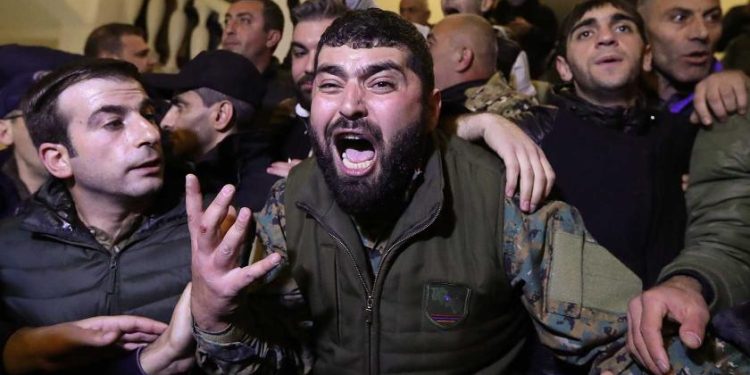 But, as it turns out, while a sizable part of the Armenian people criticizes the prime minister, they still do not believe in the opposition’s appeals.

You will recall that in his address to the parliament Pashinyan said that he was getting ready to sign a document with Azerbaijan for which he would probably be called a “traitor”, then stressed that any peace deal conflicting with the national interest of Armenia would be a meaningless scrap of paper to him.

Taking out the “scrap of paper” part, Armenian media published only the first part of the prime minister’s statement out of context, causing a storm of indignation both in Yerevan and in Khankendi.

Later, in a live Facebook broadcast, Pashinyan claimed that his statement had been “grossly distorted” and assured the people of Armenia that he was not going to sign any documents at all.

As a result, the tens of thousands of Yerevan residents who had gathered on Baghramyan Avenue after the controversial media reports went home. The attempt of the revanchist opposition leaders to use the spontaneous rally to organize a new wave of protests demanding the resignation of Pashinyan’s government failed.

In other words, Armenians turned their backs both on Pashinyan and on the opposition, composed mainly of members of the previous authorities.

According to Armenian media, the opposition 5165 movement attempted to hold a disobedience rally in central Yerevan today, but it was eventually cancelled because of the number of protesters was too small. Reportedly, it was attended by about three dozen people, mostly parents of soldiers who had been killed in the 44-day war.

“The small number of protesters does not remove the urgency of peaceful acts of disobedience demanding Pashinyan’s resignation,” said Menua Soghomonyan, one of the leaders of the movement, urging the Armenian society to show initiative. “We must self-organize instead of waiting for some or other political forces to come out to protest.”

Another participant of the failed rally, Avetik Chalabyan, believes that the government that will replace Pashinyan’s should be formed in the streets.

“That’s how it was when the USSR collapse,” the protester stressed. “That’s when the Karabakh committee was established, and various structures, including military, began to form around it. All this made it possible to organize armed resistance in Karabakh.”

According to Chalabyan, work is currently underway to form the necessary framework, but the process is very complicated and requires a lot of time because the Armenian society is divided and the opposition branches are disconnected.

We should add here that the nearly two-year struggle of Robert Kocharyan’s and Serzh Sargsyan’s supporters to overthrow Nikol Pashinyan’s government and the street protests against the peace treaty with Azerbaijan in April of this year, led by young Dashnak Ishkhan Saghatelyan, have all failed miserably, too…

Now, after Armenia’s new provocations on the border, which resulted in very tangible losses for Armenia, the revanchists in Yerevan are trying to find some new formula to remove Pashinyan from power.

The very same Ishkhan Saghatelyan, who has been very active recently, said the other day that, given the situation in the country, influential people with political potential and governance experience—former presidents of Armenia, foreign and defense ministers, as well as the Supreme Patriarch—should sit at the table together and, “looking each other in the eye”, assess the situation to find the right solutions for the country.

It was reported yesterday that Saghatelyan had met with Catholicos Garegin II and asked him to support the protest movement in the country. The official release from Etchmiadzin regarding the meeting said that the Catholicos “supports all initiatives aimed at overcoming the challenges facing the country”.

All these initiatives and related events confirm the obvious fact: while frantically trying to find a way out of the political crisis Armenia is sinking into, Armenian nationalists and revanchists stubbornly refuse to admit that the only right solution for Armenia in the current situation is to make a comprehensive peace with Azerbaijan.