"Greece supports the sovereignty and territorial integrity of all states. That also goes for our dear friend Armenia," the Greek foreign minister said at the meeting with his Armenian counterpart Ararat Mirzoyan in Yerevan. 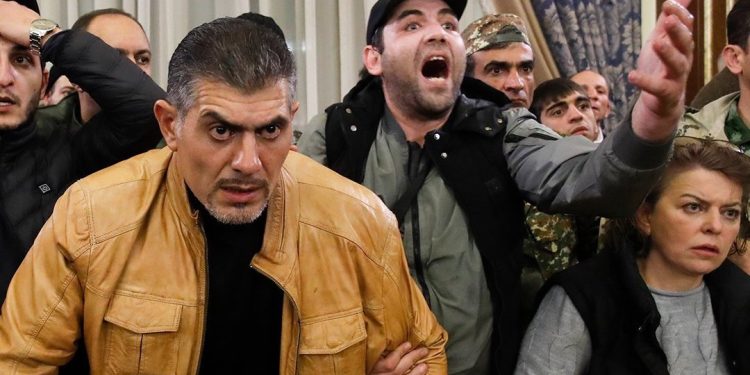 Angry protesters stormed the Armenian parliament in Yerevan, on 9 Nov. 2020

“We believe in the inviolability of borders and I am referring to the incidents that happened just a few days ago, after the shelling of Armenian territory, including populated areas, by the Azerbaijani Armed Forces. And I would like to quote President Macron who said yesterday, ‘I strongly condemn what happened in recent days and call for peace and resumption of negotiations’. I would like to send a clear message to countries that seek to redraw maps. And my message is that revisionist policies will fail. To mention another revisionist power: Turkey is trying to take advantage of the recent turmoil in order to undermine peace and stability. And we Greeks, witness this Turkish rhetoric,” Armenia’s friend said.

We see interesting rhetoric coming from Greece lately, and even more interesting politics and activity from a bankrupt country that has no say in the EU. Greece, like Turkey, is a member of NATO. Moreover, it is the most militarized country in the EU. It goes without saying that Greece has little to offer Ankara because it is ten times inferior to Turkey in all key aspects. Greece is a political-military “doughnut” for Turkey.

However, there is something that makes Greece dangerous. It has territorial ambitions and is willing to act as a “torpedo” for a number of countries. In 2021, Greece and France signed a multibillion-euro military-technical cooperation deal that included Athens’ decision to buy three French warships. The same agreement allowed Athens to buy 18 French Rafale fighters, and it was also planning to buy six more fighter jets as part of a program to modernize its armed forces amid tensions with neighboring Turkey.

For the sake of clarity, Rafale are the best 4th generation fighters, i.e., they are better than the F-16s the Turkish Armed Forces are currently equipped with (the Americans do not allow them to renew the fleet with more advanced aircrafts).

Overall, the core of the conflict between Turkey and Greece is simple: the Treaty of Lausanne, signed at the end of World War I, does not reflect modern realities, and now gas has been found in the eastern Mediterranean, and Greece and Turkey each consider it theirs.

The failure of the Treaty of Lausanne is that the demilitarized coastal islands of Turkey, which belong to Greece, are now already militarized by the Greek and US Armed Forces. That is, the agreement has been violated by the Greeks themselves and by the Americans.

At the same time, there is also a military-technical agreement between Greece and the United States. The new treaty, which was signed in 2021, allows the United States to have military bases on Greek islands in the Aegean Sea, as well as to train and arm the Greek army. Against whom? Not against Italy, of course, but against Turkey. The US plans to expand its military presence in Greece were reported back in the fall of 2018. According to The Wall Street Journal (WSJ), the US authorities discussed establishing new naval and air bases in the country. Greece is attractive to the Pentagon for political and geographic reasons, as well as because of the openness of the Greek government and opposition to negotiations, WSJ sources claimed.

Against this background, Pashinyan’s visit to the United States, his demonstrative refusal to receive the CSTO Secretary General, and his meeting with the NATO Secretary General in New York show that the geopolitical line built during World War I has become the geopolitical axis again: the United States, France, Greece and Armenia have been reactivated. It should be noted that the visit of the Greek foreign minister to Yerevan coincided with Pashinyan’s visit to Paris, and Macron’s position was very clear.

However, the Greek foreign minister was being disingenuous when he said that Greece “respects territorial integrity of all states”. Why didn’t he say something when Armenia occupied Azerbaijani territories for 30 years? Or does he need to be reminded about Cypriots massacring innocent Turks?

The established geopolitical axis, which stretches from Yerevan, going through Athens, Paris and ending in Washington, will cause many more problems in the future, in fact, it already is. This is the moment of truth for Nikol Pashinyan. It is important for him now to sign a document according to which Azerbaijan recognizes the territorial integrity of Armenia, while Yerevan does not recognize the territorial integrity of Azerbaijan or it does, but with the caveat of further discussions on the status of Karabakh. That is, to leave a backdoor in order to make claims against Azerbaijan in the future.

At the same time, Russia realizes that it is losing on the Ukrainian front and raises the stakes by announcing partial mobilization and making nuclear threats. Russia is trying to sit at the table and negotiate, but no one is in a hurry to talk to it yet.

Armenia understands that the situation around Russia is not very encouraging, so it is trying to jump this ship and make it in time for the western one, hence the rallies of Yerevanites demanding withdrawal from the CSTO. Most likely, Armenia will end up leaving Russia’s boat, and a new round of conflict will begin in the South Caucasus region.

A separate situation is developing around the Islamic Republic of Iran. How Islamic it is is a subject of another discussion, but the reality is that its interests overlap with those of pro-American Armenia. The latter are afraid of the “Turan project”, which is aimed against Iran, although today the IRGC is more of a threat to the Iranian people than any “Turan project” or the United States.