On September 14, Armenian Prime Minister Nikol Pashinyan addressed parliament in the wake of clashes at the Armenian-Azerbaijani border. 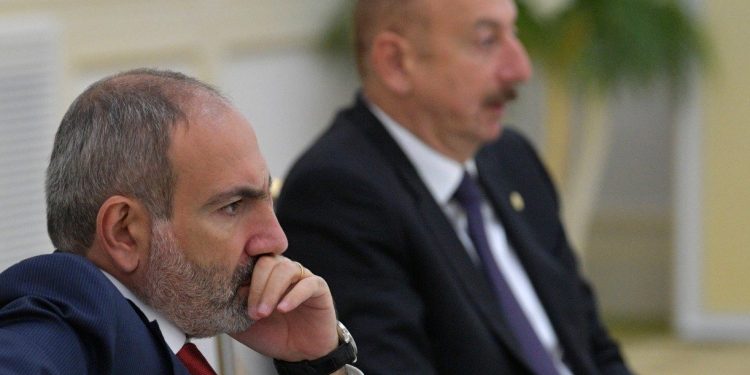 Pashinyan announced that he would sign a document stipulating that “Armenia will have lasting peace and security in an area of 29,800 square kilometers,” in reference to the size of the internationally recognized territories of the Republic of Armenia (Arka.am, September 14). “I clearly state that I will sign a document that will ensure [this],” the Armenian premier confidently stated. According to him, “Many people will criticize us, scold us, call us traitors, they may even decide to remove us from power. … I am not interested in what will happen to me, I am interested in what will happen to Armenia. I am ready to make tough decisions for the sake of peace.”

Immediately after this speech, thousands of Armenians rushed to parliament and demanded the prime minister’s resignation. Members of the opposition groups, led by former Armenian presidents Robert Kocharyan and Serzh Sargsyan, seized the opportunity to drum up popular discontent against Pashinyan’s government. These groups oppose any document that would stipulate recognizing Azerbaijan’s territorial integrity and, as such, ceding Karabakh to Azerbaijan (see EDM, May 11). The police hardly managed to prevent the crowd from breaking into parliament, as was the case after the November 10, 2020, ceasefire deal in the wake of the Second Karabakh War. The uprising was interpreted by many local observers as an unfortunate backlash against the peace treaty initiatives. “[These protests raise] many concerns about the survival of the Armenian-Azerbaijani peace process as demonstrators are against [it]”, said Onnik Krikorian, an Armenian journalist based in Tbilisi (Twitter.com/onewmphoto, September 14).

Under this pressure, Pashinyan, seeking to calm down the angry crowd, shared a post on his Facebook profile, stating that what he said in parliament was taken out of context and that he was not going to sign any documents with Azerbaijan (News.am, September 14). It is unclear whether this backtrack means Yerevan has abandoned the negotiations for a peace treaty altogether. However, the fact that all major mediators (e.g., Russia, the European Union, and the United States) and international organizations (e.g., the United Nations) are urging both sides to delimitate and demarcate their borders and sign a peace treaty suggests that it will be difficult for Yerevan to resist the peace treaty initiatives for too long. Such calls for a peace treaty have mounted in recent days as regional actors respond to the clashes of September 13 and 14.

Amid this escalation, the Armenian government unsuccessfully sought to draw support from major powers and convince them to apply pressure on Azerbaijan. In particular, one outstanding failure on this path happened in Armenia’s calls for support from Russia and the Collective Security Treaty Organization (CSTO). An emergency video summit of the leaders of the CSTO member states (Russia, Belarus, Kazakhstan, Kyrgyzstan, Tajikistan and Armenia) chaired by Pashinyan on September 13 stopped short of openly supporting Armenia and decided instead to send a fact-finding mission to Yerevan.

On September 14, Kazakhstani Minister of Foreign Affairs and Deputy Prime Minister Mukhtar Tileuberdi, rejecting Armenia’s allegations, said it is difficult to discuss border violations between the two South Caucasus states, as there is no delimitation (Report.az, September 14). On September 19, Russian Deputy Prime Minister Alexey Overchuk, speaking at the 9th Russian-Armenian Interregional Forum in Yerevan, reiterated this call. Overchuk articulated, “The path to peace in the region is known. It is necessary to unblock economic and transport ties in the region, to delimit the border between Armenia and Azerbaijan and to conclude a peace treaty between the two countries,” referring to the three major dimensions of the peace treaty negotiations (News.am, September 19).

Such a position from the CSTO members dissatisfied the Armenian leadership, who openly expressed their disappointment. “[I] must also admit that we had a bit higher expectations from some countries, or a country, and it is no secret that in some cases those expectations were not quite met,” Armenian Foreign Minister Ararat Mirzoyan stated in a cabinet meeting without specifically naming the CSTO or Russia (Azatutyun.am, September 16). Armenia faced a similar reaction in its appeal to the UN Security Council. Members of the body urged the two South Caucasus countries to take steps toward border delimitation and demarcation, as well as signing a peace treaty (Dppa.un.org, September 15).

Other countries’ and political figures’ reactions differed quite dramatically from those of the UN and CSTO members. For example, Speaker of the US House of Representatives Nancy Pelosi, in her visit to Armenia on September 17 and 18, took a partisan position and accused Azerbaijan of unacceptable attacks against Armenia (News.am, September 18). US State Secretary Antony Blinken, for his part, did not take such a starkly one-sided approach. During a phone call with Azerbaijani President Ilham Aliyev, Blinken urged him “to cease hostilities and stressed that the United States would push for an immediate halt to fighting and a peace settlement between Armenia and Azerbaijan” (State.gov, September 13).

Secretary Blinken upgraded his mediating role between the sides and managed to bring the foreign ministers of Armenia and Azerbaijan to the table in a trilateral framework in New York, where the two ministers had traveled to attend the UN General Assembly (State.gov, September 19). Although no major breakthrough was announced from the ministerial meeting, Blinken urged the sides to meet again before the end of September 2022. A similar plan had been proposed at the EU-mediated Brussels summit of Armenian and Azerbaijani leaders on August 31 (Report.az, September 1; Armenpress.com, September 20). According to the agreements reached in Brussels, the foreign ministers are supposed to meet and work on the draft texts for a peace treaty. As such, the coming months will demonstrate whether the two sides can manage to overcome all hurdles on the path toward a comprehensive peace treaty, which is widely considered a necessity for achieving lasting peace and stability in the region.