This appears to be the end of the two-year legal saga of Robert Kocharyan. Now he says he’s going back to politics to challenge his political nemesis, Prime Minister Nikol Pashinyan. 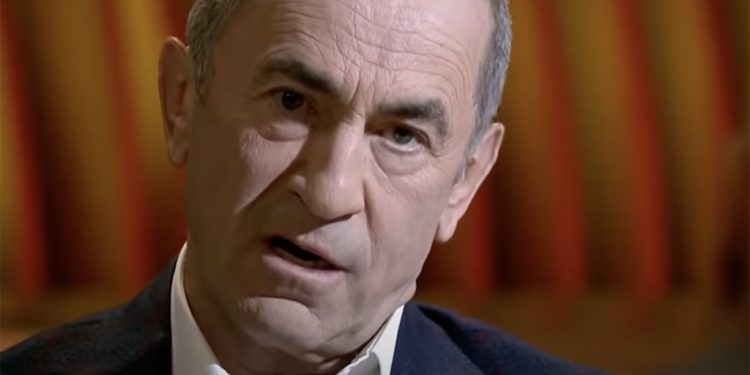 The case against Kocharyan has been a touchstone for the struggle between Pashinyan and the judicial system, which is still staffed by many judges inherited from the former regime. (Screengrab)

The trial of the decade in Armenia is over, with former president Robert Kocharyan acquitted despite vigorous efforts by Prime Minister Nikol Pashinyan, his political rival, to secure a conviction.

The verdict was read by Yerevan Court of General Jurisdiction judge Anna Danibekyan on the afternoon of April 6. The trial followed a ruling two weeks earlier by the Constitutional Court that the section of the criminal code that prosecutors charged Kocharyan with violating – forbidding “overthrowing the constitutional order” – was unconstitutional.

Kocharyan has been on trial since July 2018, when he was charged with the crime in connection with the violent breakup of protests following contested elections in 2008. Ten people died in the violence.

Also acquitted were several other former senior officials who had been prosecuted on the same charges: former defense minister Seyran Ohanyan; former head of the national security council Armen Gevorgyan; and the head of the Yerevan military garrison at the time of the crackdown, Yuri Khatchaturov.

Armenian law forbids prosecutors from changing charges against a defendant on trial, but following the Constitutional Court ruling, the Prosecutor General’s office on April 1 appealed to the court to rule that law unconstitutional. The court has not yet ruled.

The charge of “overthrowing the constitutional order” had been long debated and Kocharyan was in and out of jail repeatedly; he was arrested and released three times before his trial in September 2019. Then, a judge ruled that the arrest was unconstitutional but he remained in jail.

The case against Kocharyan has been a touchstone for the struggle between Pashinyan and the judicial system, which is still staffed by many judges inherited from the former regime, which Pashinyan overthrew in the “Velvet Revolution” of 2018, and which the current authorities believed remain loyal to them. Pashinyan undertook an effort to replace the judges with those more friendly to the new authorities, earning rebukes from the Venice Commission, a Council of Europe body advising members on legal issues.

Pashinyan’s main target was the Constitutional Court and its then-chairman, Hrayr Tovmasyan. Tovmasyan was demoted but Pashinyan didn’t manage to seat his preferred replacement and the government was forced to scale back its ambitions to remake the court. That may have been decisive in the recent unfavorable ruling.

Kocharyan has been out of jail since June 2020, when he was released on bail.

Following the defeat in last year’s war with Azerbaijan, and Pashinyan’s dramatically weakened political position, Kocharyan announced his return to politics and his intention to run in snap parliamentary elections, now scheduled for June 20. In an April 5 interview with Russian journalist Vladimir Pozner, Kocharyan said he would likely be the head of an alliance of two parties, which he did not name.