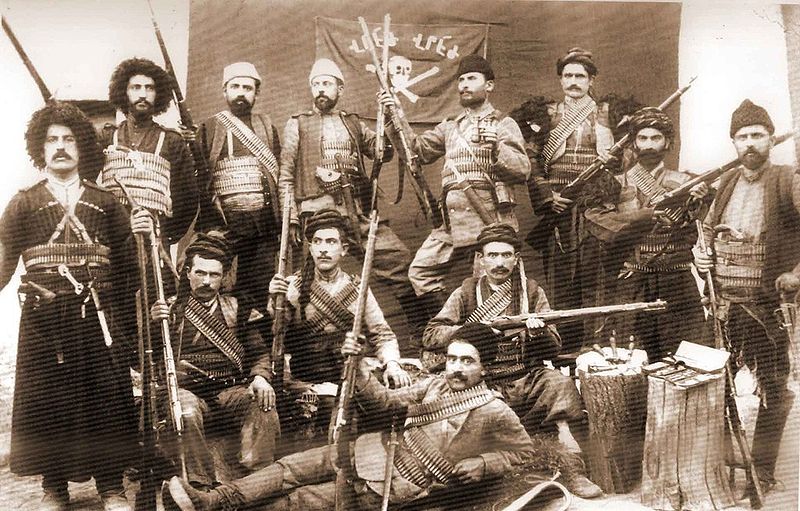 And although the CSTO troops, including the Armenian units, have practically left Kazakhstan now, we believe that this article will still be of interest to the readers.

The phrase “All the stores are destroyed” is not a description of the recent events in the Kazakhstani city of Almaty, but an example of the Armenian military “bringing order” to the region. Armenian Armed Forces units have acted as peacekeepers in Kazakhstan since January 7. Armenian Prime Minister Nikol Pashinyan posted on his Facebook page that the operation was aimed at “restoring the situation in the country, at establishing peace.”

The irony is that Armenian military units were also involved in restoring “order” in Central Asia a little more than 103 years ago. In October-December 1917, the Bolsheviks subjugated most of the region. As mentioned in a research paper published by the Academy of Sciences of Uzbekistan in 2000 (“Turkestan in the early twentieth century: The history of national independence”), they completely ignored Muslims, although at least 90 percent of the region’s population was Muslim.

As a result, the All-Muslim Congress in Kokand, representing all strata of the local population, decided to establish a “territorial autonomy” on a democratic basis on November 27, 1917. The first attempt of the Turkic peoples inhabiting Central Asia to create an independent state was called the Turkestan Autonomy. Its official languages were Uzbek, Kazakh, Persian (Tajik), and Russian.

In December of that year, 60,000 people held a rally in Tashkent in support of the Turkestan Autonomy. Demonstrations were held in Namangan, Khanabad and Kokand. But in January 1918, the IV Congress of Soviets of Turkestan resolved to arrest the leaders of the Turkestan Autonomy, declaring the autonomy of the Kokand government and its members illegitimate. The Soviet government took steps to remedy the consequences of the expression of the will of the indigenous peoples in the region.

A military operation put an end to the autonomy of Turkestan and Kokand in February 1918, and armed groups of the Armenian Dashnaktsutyun party played a crucial role in it.

According to the Ulug Turkestan newspaper, the Dashnaks marched through the streets of the Old City, burning everything in their way: “It was a terrible sight to see in Kokand. One-third of the old city was completely destroyed. There were dead bodies lying everywhere.”

“The attack of the Bolshevik troops was accompanied by massive lootings and murders of Muslims, in which the Dashnaks were especially zealous,” recounted Captain Bezobrazov, a witness of the Kokand events, who later reported this to the General Staff of the White Movement in Siberia.

“The Dashnaktsutyun units were the first to refuse to obey orders and began to seize trophies,” admitted Ye. Kozlovsky, the author of the 1928 essay “The Red Army in Central Asia” published in Tashkent.

The brochure “Kokand Autonomy” published in Tashkent in 1931 by the Soviet authorities says that the Dashnaks who entered the old city were engaged in a mass plunder of the civilian population: “Perfilyev and the Dashnak detachment besieged Kokand for 9 days, during which the uprising was suppressed, there were plundering and horrible murders in the city.”

“The Dashnaks began to ravage the ancient city, looting houses, trying to take possession of the locals’ riches. All the stores were demolished, they took everything they could to warehouses and burned the rest. There were massacres in the city,” said the leader of Turkestan’s Communists Turar Riskulov.