Pashinyan's government, which no longer conceals that it adheres to a course not for peaceful Armenia, but for the speedy rearmament and creation of a "new model" army, has, however, shouldered an unaffordable burden for the country. 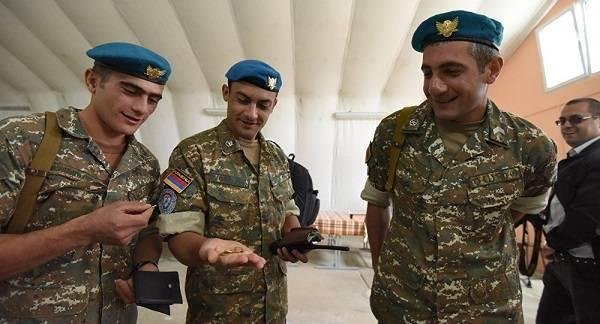 It is not at all easy to restore and rearm what is left after the defeat in the autumn of 2020. Now, the soldiers and officers, who have not received any additional benefits due to the total corruption, are more and more dissatisfied with their material security both at the place of service and in everyday life.

The Armenian authorities seem eager to put the idea of a new army into practice, from increasing salaries to merging military academies into one mega-university. In his speeches, Pashinyan painted a beautiful picture of a powerful and well-fed Armenian army of the future, whose only concern will be the “protection of the motherland” and “repulsion of aggression”. The government promises to take care of everything else: modern arms and ammunition, comfort in barracks and at home, and higher salaries than anyone else in the country. As they say, “only victories and new horizons” lie ahead. However, in fact, the Armenian PM’s customary promises adopted to lull vigilance, i.e. nothing more than a cloud of dust, just like all his bombastic speeches.

As you know, with the defeat in the 44-day war, the Armenian people had many revelations about their own lives, including their own army. It turns out that professional military training was at zero. Corruption was rampant in the Armenian army, to the point that even the provisions for Armenian soldiers during the Second Karabakh war were stolen back into Armenia, with only scraps and leftovers reaching the soldiers’ trenches (Manvel Grigoryan died, but his cause lived on). In general, it is quite understandable why so many Armenian soldiers deserted – what could they do, hungry, cold, and frightened by the rapid advance of the Azerbaijani Army?

After the defeat in the 44-day war, Pashinyan’s government rushed to rectify the situation in a hurry. However, six months after trying to launch a military reform, some very unpleasant facts began to emerge, further compounding the bunch of problems that Armenia faced during the last war. In addition, it appears that Pashinyan intends to organize a real obstacle race for his military. Judging by Armenian media reports, the Armenian military officers are already openly outraged at what is happening.

In October, the government approved a package of bills to make contract military service more attractive and interesting, with bonuses for servicemen. Probably, such an innovation would really attract young men to military service except for one slight problem – dependence of the supposed advantages on the military appraisal. In principle, there is nothing unusual about it, the certification of personnel is introduced in many armies of the world, but the Armenian military experts assert that the majority of servicemen will fail it. In case of failure, dismissal from the ranks of the armed forces is envisaged…

The same media believe that it looks like some kind of state-level manipulation or, at the very least, brazen trickery: they say you come to the army, serve, and hopefully one day you will get the salary announced by the government. “Prime Minister Nikol Pashinyan uses every suitable and inappropriate opportunity to remind that salaries of servicemen will be doubled in the near future, but in private conversations, the servicemen say that if the planned attestation is carried out, salaries will not be increased and most of the servicemen will simply resign,” one newspaper writes. A source in the Armenian Defence Ministry reports that qualified servicemen with combat experience, who seem to know the military science but cannot answer some theoretical questions, are also on the verge of dismissal.

The idea of attestation is not liked even by high-ranking military officials. The Armenian military irritatedly asks: “Who will conduct the attestation?” Justifiably, they fear that the level of their training will be determined by the likes of Artsrun Hovhannisyan and Jalal Harutyunyan, the same ones who have become the symbol of shame, cowardice, and lies, total military incompetence, but still serve in the Defence Ministry of Armenia.

Probably due to their “professionalism”, all beginnings of the army reform were thwarted at the roots, and it stalled from the first days. In any case, the Armenian press publishes the amount of money the servicemen were cheated on. Their money was practically swallowed by the ministry. Thus, “Hraparak” reports that a serviceman complained to the editorial office about Defence Minister Suren Papikyan who had promised to pay a monthly surcharge of 30 per cent of the salary starting from September up to December, and in December the servicemen would receive the end-of-year bonus. But after the September hostilities on the notional Armenian-Azerbaijani border, the head of the agency changed his decision: soldiers will be given only a one-off bonus amounting to 50 per cent of their salary. Meanwhile, according to the complainant, the government had also decided to allocate a 50 per cent bonus, but the bonus did not reach the servicemen.

“Defence Ministry officers are outraged that large bonuses are given to the police for dispersing protesters, while the defence ministry personnel are ‘fed with promises’. Does it turn out that the saving of funds applies only to servicemen of the Defence Ministry? There are rumors among servicemen that Deputy Defence Minister Brutyan is holding back their bonuses,” Hraparak quotes the officers as saying.

Thus, Pashinyan’s cabinet attempt to reformat the army has reached a dead end. And not just a dead end, but new structural problems, which have caused general dissatisfaction among the military. The inability of the Armenian prime minister and his team to solve important problems and carry out large-scale reforms has once again been confirmed. Making promises does not mean keeping them. Yerevan is increasing the military budget, but this is unlikely to fix the dire situation in the defeated army. Although it seems clear that in terms of corruption schemes the next military reform seems to be ahead of all other army “innovations”.