Armenians in search of greener pastures

According to recently published official data, more than 46,900 Armenian citizens took Russian citizenship last year, and a total of 153,800 Armenians got Russian passports and left the country in 2017-2021, which makes up about 5.2% of Armenia's population. 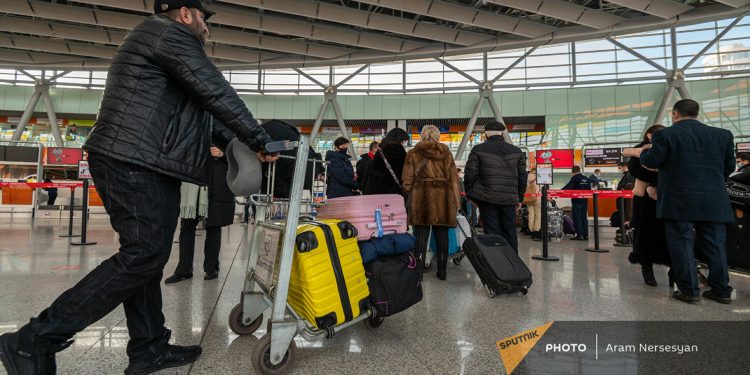 “Suitcase—train station—Russia!” local nationalists chanted during perestroika, confident that once they left the Soviet Union, they would immediately find happiness and build a state of general prosperity. And now Armenians themselves are leaving their country in droves, striving to find simple human happiness and the right to a decent life in Russia.

This does not mean that they grew to love the country that grants them citizenship. They still have no particular fondness for it. It’s just that those pastures are much greener. Rallies and street protests are not helping. Even the color revolution has been useless: over and over again the power in Armenia is taken over by such personalities that Armenians first clutch their heads, then rush to pack their suitcases.

The proud bird called “the dream of the Greater Armenia” never took off. Its wings are frayed, its feathers have fallen out, and it is now more of a scarecrow than a source of inspiration. There have been no victories on the military or economic fronts, only bleak prospects. There is utter disappointment in their own elites, whose only talent, as it turns out, is their ability to shout loudly.

The exodus from Armenia is a kind of the result of voting: TV vs refrigerator. As we can see, TV lost with a bang. And the local elites were unable to offer their citizens even a vision of the future without revanchism, without war, with stability and prosperity.

Those leaving Armenia just want to catch the train to the 21st century. Their country may not even get tickets to the last car. The world is rapidly changing, but Yerevan does not seem to notice it, as the rhetoric never changes, the policy is fixated on one thing, the ideology remains the same: “Who is to blame for the decline of the Greater Armenia? And what should we, the most ancient nation, do about it?” Clearly, you can’t go anywhere with this baggage, so Armenians pack each their own suitcase, avoiding to take on the burden of the whole country.

They don’t need it anymore; what matters to them is becoming part of the diaspora. Let Armenia remain a beautiful myth and a sweet dream. It is so good to dream about it somewhere far away, in cozy comfort, with a full belly—and even actively fight for it on the internet, from the safety of their couches. Not much fighting can be done in Armenia itself, where one would have to struggle to take care of one’s daily bread. But when the problem of daily bread is not so pressing, it’s time for the Armenian flag-waving, self-aggrandizement and humiliation of others.

The farther away from Yerevan, the stronger the love for Armenia; this has been proved and observed more than once. The fiercer the emigrants in defending the Armenian myth of the great ancient nation, forgetting that if it had a leg to stand on, they would not be leaving their country year after year in such large numbers.

Having voted with their feet for the hopelessness of their own country, they keep on vehemently blaming everyone but themselves for its misfortunes. And so they live with this split consciousness, waiting for a new batch of family and friends to arrive for permanent residence from the abandoned “Armenian paradise” of their own making.