As tensions between Russia and Ukraine continued to rise, Azerbaijani President Ilham Aliyev flew to Kyiv ten days ago (January 14) to meet with his Ukrainian counterpart, Volodymyr Zelenskyy. 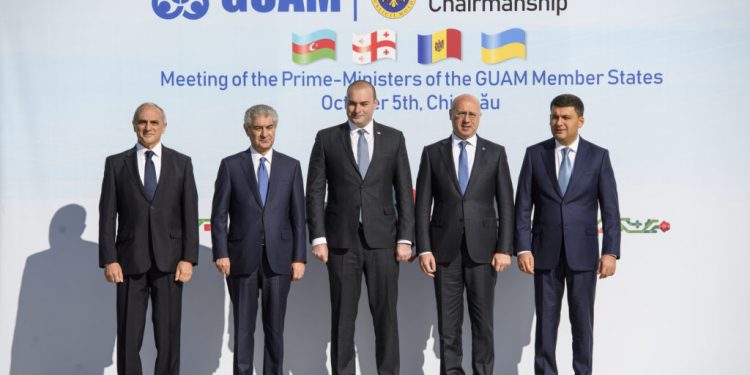 After their talks, the two leaders called for expanded cooperation in all spheres, including economics, transportation and national security (President.gov.ua, Kp.ua, January 14). This Azerbaijani tilt to Ukraine at a time of crisis raised alarm bells in Moscow for a variety of reasons; but Russian concerns were somewhat mollified by the fact that immediately after visiting Kyiv, the Azerbaijani president telephoned Russian President Vladimir Putin to discuss Ukraine (Kremlin.ru, January 18; Osnmedia.ru, January 25). That call suggested Baku clearly does not want to increase its own problems with Russia by going too far in supporting Ukrainian sovereignty.

Still, the fact that Aliyev went to Kyiv at this point, even though he and Zelenskyy met as recently as at the end of last year in Brussels, underscores how resolutely Baku backs Kyiv on the issue of Ukrainian sovereignty over Crimea. Aliyev’s recent visit, thus, underscored that military and economic cooperation between Ukraine and Azerbaijan endure—Ukraine has long been a key weapons supplier to Azerbaijan and is also a major supplier of foodstuffs to that South Caucasus country, while Azerbaijan provides an important share of Ukraine’s energy needs. But additionally, the bilateral summit signaled Azerbaijani unease about the projection of Russian power beyond its borders. For Baku, this is an issue not only in the South Caucasus, where the presence of Russian “peacekeepers” in Karabakh and along Armenian-Azerbaijani borders is an increasing irritant. Azerbaijan’s government has also expressed concerns about Russian actions in the Black Sea region and, most recently, in Central Asia. It is illustrative that Azerbaijan did not openly express support for the Moscow-led deployment of CSTO troops in Kazakhstan earlier this month.

Moscow has long tolerated Baku’s position on Crimea, recognizing that Azerbaijan can hardly agree to border changes elsewhere when it is defending against any changes in its border with Armenia. And the Kremlin at least rationally understands—even if it does not welcome—the ongoing trade between Azerbaijan and Ukraine, with oil and natural gas going in one direction, and food and weaponry going in the other. Instead, Russia is more worried about three other issues that generated much Russian media discussion in the wake of the meeting between Aliyev and Zelenskyy.

First of all, Ukrainian journalists reported that the two presidents had spoken about not only bilateral trade but also the creation of a new transport corridor that would link the countries of the so-called GUAM group together and with Europe (TASS, January 14, 2022; Rifan.ru, January 19, 2022). That 20-year-old grouping of non-Russian countries, composed of Georgia, Ukraine, Azerbaijan and Moldova, was established and continues to function as a counterweight to the Russian-led Commonwealth of Independent States (CIS). Thus, from Moscow’s perspective, it is an anti-Russian group. If Aliyev and Zelenskyy are able to create the corridor they referred to at their summit, it would weaken Russia’s influence across the former Soviet space. Moreover, development of this intra-GUAM transit route would increase the ability of these countries to integrate not only with Europe but with China, which itself has previously expressed interest in the GUAM area as part of a transcontinental route (Fpri.org, June 9, 2017).

Second, the Aliyev-Zelenskyy meeting revived long-standing Russian fears that GUAM is a device Turkey is using to expand its influence in the former Soviet space. Those concerns come and go; but after the Kyiv meeting, Russian commentators are again sounding the alarm. Moscow-based military specialist Aleksandr Zhilin, for example, said in a recent interview that what is going on is an attempt by Ankara (Baku’s closest and most important ally) to enlist the GUAM countries in its expansionist plans, a fear echoed by others who argue that it is even possible Aliyev and Zelenskyy discussed having Turkey become a member of GUAM (Radio Komsomolskaya Pravda, January 17; Moscow Echo, January 15). Were that to happen, the grouping would become a far more potent force because it would extend beyond the borders of the former Soviet Union and directly involve a North Atlantic Treaty Organization (NATO) member state in the former Soviet space. Such a fortified grouping could, ostensibly, then be used against Russia, including against Moscow’s forces in Ukraine.

Finally, the third and overriding reason for Moscow’s “nervousness” about the Kyiv meeting, according to Baku-based commentators (Zerkalo.az, January 16), is that it highlighted how, 30 years after the breakup of the Soviet Union, the formerly constituent republics are increasingly going their own way. That trend makes it far more difficult for Moscow to credibly claim that it has a droit de regard over the entire post-Soviet space and demand that the West recognize it. GUAM, even following the recent Aliyev-Zelenskyy summit, remains more a specter than a reality, but it is a specter that haunts the Kremlin (Kavkazgeoclub.ru, January 22, 2022). And if that grouping does, now, take on new life, at a minimum that would mean that Western powers, including the United States, will be less inclined to accept the former Soviet space as a geopolitical reality. As such, this should make them increasingly willing to view the countries that emerged from the disintegration of the Soviet Union as independent actors, whose rights and independence from Moscow must not only be recognized but defended.

Such an attitude—particularly if accompanied by solid policy consequences—naturally challenges Putin’s own regional understanding and approach. So Moscow views the meeting in Kyiv as a threat, despite whatever words Aliyev may have offered to placate his Russian counterpart.