After decades, there finally is reason for optimism about the resolution of the Nagorno-Karabakh conflict. Negotiations are advancing, and normalization of relations between Armenia and Azerbaijan – like reopening transport links and cooperating on the border – is proceeding even without an agreement on the thorniest issue dividing the two sides: the fate of Karabakh itself. 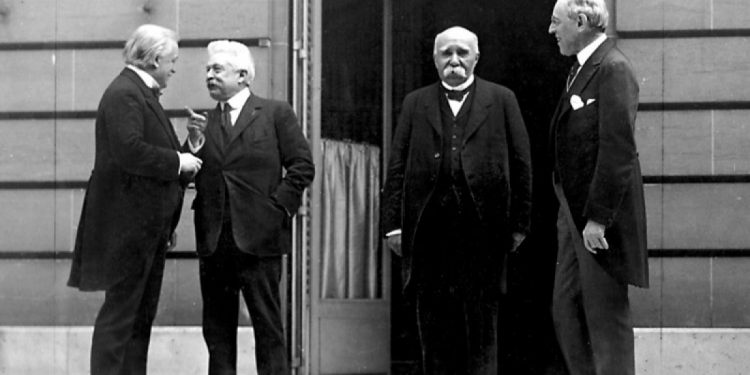 The leaders of the big four powers after World War I: Lloyd George (Britain), Orlando (Italy), Clemenceau (France), Wilson (US) - found it quite difficult to put the abstract concept of self-determination into practice.

The Armenian government also has made a fundamental shift in its focus of negotiations, away from territorial claims on Karabakh and toward guaranteeing the rights of the Armenians of Karabakh to live freely and safely.

How to reconcile the issues of the territorial integrity of states with the rights of minorities within those states has long been the focus of international scholarship on conflict resolution. In successful cases, this is achieved through some form of autonomy for the minority within the central state.

In the case of Armenia and Azerbaijan, however, both sides have been wary of the notion of autonomy for Karabakh Armenians. Armenians don’t trust the Azerbaijani state to respect their rights, even under a regime offering autonomy, and Azerbaijanis fear that autonomy would merely be a stalking horse for Armenians to again pursue separatism.

For years, Azerbaijan had offered some sort of autonomy to Karabakh Armenians within its central state. Following the victory in the 2020 war, this offer was unconditionally revoked. The Karabakh Armenians, meanwhile, have strongly resisted Yerevan’s gestures toward considering reintegration into Azerbaijan, regardless of any kind of autonomy they might be granted by the central state.

But what is the alternative? Armenian irredentism and separatism would only prolong the conflict, as would a forceful Azerbaijani imposition of its sovereignty over the territory. In the latter case, even if not a single Karabakh Armenian were harmed in the process, it would nevertheless likely result in a mass exodus of the population from their homes. Neither result can lead to real conflict resolution and a lasting peace.

Still, autonomy is a viable compromise that can lead to a lasting peace when it is implemented carefully and properly, with the aim of bringing the two nations together.

One good example is the Aland Islands, a Swedish-speaking autonomous region within Finland. That arrangement celebrated its 101st birthday this year as a successful means of bringing Swedes and Finns together politically, culturally, in education and interpersonal relations. Its secret? Carefully thought-out structures for separating powers between the autonomy and the central government, respect for minority rights, and security guarantees in the form of demilitarization (including, no local conscription or military bases) and neutralization (the autonomy cannot participate in wars neither passively, nor actively) of the region.

Even more important, however, is a key mechanism allowing for even small day-to-day questions about the separation of powers to be resolved. There is a committee of five lawyers – two from each side and one chair who is accepted by both sides. The chair also serves as a liaison between central state and institutions of autonomy. The committee addresses the issues (usually minor ones, like how the central post-office and local post-offices should separate their budgets, or who is responsible for the trash stockpiling and utilization on mid-level between autonomy and the state, etc.), before they can turn into major crises, so the two sides work on solutions rather than on accumulating grievances.

In the case of Karabakh, some examples from Aland that would represent the minimum requirements of a workable autonomy would be: a special regime for language rights (the use of Armenian in schools, media, local government, and recognition of Armenian as an official regional language), cultural rights (Armenians would hold property rights on all cultural objects, proceeds from tourism), exclusive rights to real estate (in local municipalities or territorially), local control over tax revenues and subsidies from the central state. All of these rights will have to be a part of an international treaty guaranteed by regional states and not subject to change without minority’s consent.

The same treaty should guarantee the complete demilitarization and neutralization of Karabakh: it could not host any military bases, military service for members of the autonomy cannot be mandatory, and weapons would be restricted to special units of local police forces.

Such is a workable minimum (based on Aland Islands experience) that would be required. However, it should always be possible to negotiate an extension of the political and/or territorial side of autonomy as well as adjust the regime in accordance with the needs of the minority and central state. Such questions can be sensitive, as the local autonomy structures will have to be managed by some kind of its own local authority.

Furthermore, with time and the normalization of relations between Armenia and Azerbaijan there may come a return of Azerbaijani minority to Armenia and vice versa. If such process will take place, the establishment of a sister autonomy in Armenia on the same conditions (whichever they will be at the time) for Azerbaijanis would only strengthen the reciprocity effect that autonomy produces, bringing people even closer by caring for each other’s minority and establishing more points of interdependence. This has also happened in the relations between Sweden and Finland, and Finnish population is the largest minority in Sweden today. The same logic can be extended even to the contentious issue of enclaves, eliminating the need to find complex solutions and concentrating instead on the reestablishment of Armenians and Azerbaijanis in their homelands.

All of this may sound utopian and unworkable for the Caucasus, where hatred and grievances have built up over decades. But 101 years ago, mistrust also was deep between Swedes and Finns. There have been political disagreements between autonomy and central state, people in Finland refused to recognize Swedish language as valid in Finland, people in Aland Islands mistrustful on all kinds of questions including if Finland treats them as second-class citizens. There have been changes to the autonomy structures twice in past century, and another revision is coming, adjusting various aspects of the autonomy regime. Still, this arrangement survives as a successful example of how two nations were able to overcome mistrust by working together.

As Armenians and Azerbaijanis are finally trying to build a lasting peace, autonomy can be a powerful tool that brings people together instead of dividing them. It is important to give it a chance.

Kamal Makili-Aliyev, Associate Professor of Human Rights at University of Gothenburg. He is an author of “Contested Territories and International Law.