While the Cat’s Away: EU Advances South Caucasus Peace

As Russia’s war against Ukraine continues to preoccupy the Kremlin, there are signs of hope in the South Caucasus. 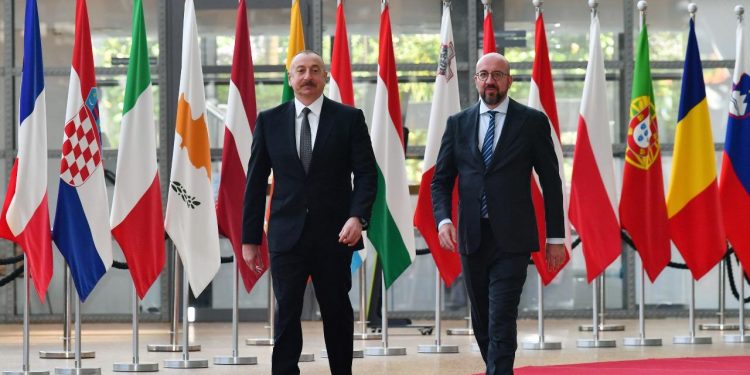 Locked in a bloody conflict less than two years ago, Armenia and Azerbaijan are seeking to agree on a peace deal under the auspices of the European Union (EU). Meanwhile, Turkey and Armenia — also long at odds — have also made progress towards a rapprochement.

Russia — which has troops in both countries — can take no credit for these developments, and is likely to be concerned about the progress made by what it sees as its arch-foe (Ukraine’s troubles really began in 2013 when it was poised to sign an EU association agreement with the bloc.) It is a depressing reality of early 21st century geopolitics that long-term dispute resolution and Russia are widely regarded as antithetical.

On May 22, Armenian and Azerbaijani politicians met in Brussels to discuss the peace process, an event facilitated by European Council President Charles Michel. The rapid implementation of some of the items agreed upon by Azeri President Ilham Aliyev and Armenian Prime Minister Nikol Pashinyan at their meeting suggests that substantial progress is being made.

First, after extensive negotiations, the two nations agreed on transit lines, including the Zangezur corridor, which would connect Azerbaijan to its Nakhchivan enclave through Armenian territory. They also decided to delineate boundaries and organize an international committee to deal with the issue. The commission on the state boundary between Armenia and Azerbaijan met the next day (May 24) and started work.

This marks substantial progress, but just as significant is the involvement of the EU in the South Caucasus. Ever since the end of the 2020 Nagorno-Karabakh war, a consensus has been prevalent that the West was distancing itself from the region. Russia was the dominant power not only militarily, but politically too. It largely dictated the diplomatic game between Armenia and Azerbaijan, and was accused by some of a determination to block real progress since a continuing dispute served its needs.

This has changed. The representatives of the two South Caucasian countries have met through the EU’s mediation since the beginning of this year, while the only Russia-mediated meeting – that of the foreign ministers on May 12 – took place on the sidelines of another major event and produced nothing new. Russian politicians have angrily noted the EU involvement, while the foreign ministry spokesperson even accused the EU of interference in the peace process.

While Russia still retains a powerful position in the region, it does so mainly through military tools. Few if any truly believe that the Kremlin is seriously intent on helping the peace process since a deal would dilute its influence. Diversification of outside influence means a diminution of Russian power — its troops would no longer be needed. Hardly surprising then that Armenia and Azerbaijan see the EU as a more honest broker.

To this should be added sentiment in Armenia and Azerbaijan. It has become clear to many in Armenia that a deal needs to be signed with Azerbaijan, which ideally would end two decades of war and armed confrontation. A new tone in the rhetoric from the Armenian government indicates a shift in thinking. Many observers, including this author, believe that it might now accept that Nagorno-Karabakh exists within the borders of Azerbaijan in exchange for guarantees of cultural rights for the Armenian population there. This is what stirred protests in Armenia that complicate the situation for Pashinyan’s government. But it is also likely that he will weather the storm — large parts of the Armenian public are unwilling to see the return of the old guard.

Russia’s brutal invasion of Ukraine and its grinding progress in Donbas is both a danger and an opportunity for the South Caucasus and Armenia-Azerbaijan relations. It is a danger because of potential military escalation; an opportunity because Russia is not entirely interested in being an honest peacemaker. And this is where the EU has made significant progress through the summits it has convened.

Russia may now seek to stir things up militarily to advance its interests, but its overall position in the South Caucasus is unenviable. The Kremlin has military options, but few other means of influence. And it is a weak tool, since imperial over-reach and economic disaster suggest a country more fragile than it might appear. However many military bases Russia has in the states beyond its borders, they cannot change the tide of history.