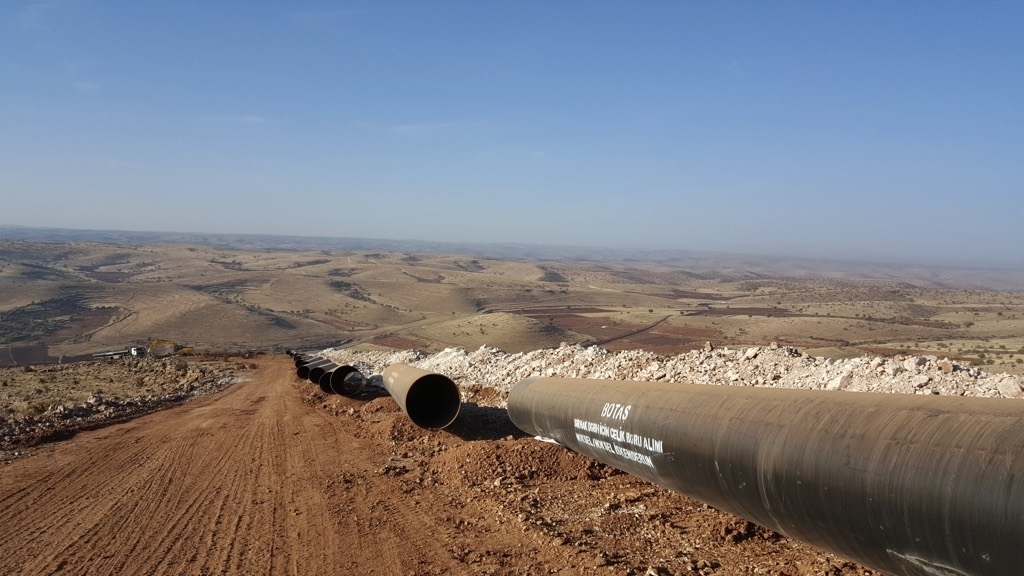 Construction of a gas pipeline in Turkey. (photo: Botaş)
After almost a year of intense negotiations, Azerbaijan and Turkey have finally concluded a new deal to replace the 20-year-old contract that had governed their gas trade expired in April.

The agreement was announced in a low-key fashion, atypical for the two states that rarely miss an opportunity to trumpet their ascendant ties. Instead of a joint signing ceremony between the two leaders, Azerbaijani officials only confirmed the existence of a “temporary agreement” by email. Speaking on September 20 at an energy conference in Dubai, Turkey’s deputy energy minister, Alpaslan Bayraktar, also confirmed that a new agreement had been reached and offered no details.

That reticence is unlikely to reflect the broader state of relations between Baku and Ankara only a year after Turkey provided wide-ranging support to Azerbaijani forces who retook much of the territory they had lost to Armenian forces in the last war three decades earlier.

But it does highlight both the difference in the economic priorities between the two states, as well as how much European gas markets have changed since the original contract was inked in 2001 by the then-presidents Heydar Aliyev of Azerbaijan and Suleyman Demirel of Turkey.

Talks between Azerbaijan’s state oil company SOCAR – which heads the Azerbaijan Gas Supply Company (AGSC) – and Turkey’s state gas import company Botas on a renewal had been widely expected to be little more than a formality.

But they unexpectedly dragged on for the entire summer, sparking rumors of major differences ranging from disagreements over price to Azerbaijan not having enough gas to meet its domestic needs and all its export demands.

Given their generally close ties, “Azerbaijan and Turkey were always going to reach an agreement,” said regional energy analyst John Roberts, a senior fellow at the Atlantic Council.

“Turkey values diversity of supply and Azerbaijan is dependent on Turkey as its only route for exporting gas to Europe,” Roberts told Eurasianet, referring to the TANAP pipeline carrying Azerbaijani exports across Turkey and on to Europe, the construction of which was largely paid for by Baku.

Turkish imports of Azerbaijani gas under a second contract, via the TANAP line, continue unaffected.

But the loss of the first contract left Turkey in a difficult position during an unusually severe mid-summer heat wave, when low water levels in the country’s main hydro-power dams meant that gas-fired power plants struggled to meet soaring power demand as Turks turned their air conditioning to full blast.

The root problem behind the slow renewal is that Azerbaijan and Turkey are in very different bargaining positions.

In Ankara, President Recep Tayyip Erdogan and his AKP party are at historic lows in opinion polls. Their attention is focused on presidential and parliamentary elections scheduled for 2023, and the need to hold down energy prices for an economically struggling electorate already restless due to rising inflation and a falling lira.

Azerbaijan, meanwhile, is heavily dependent on oil and gas exports, which fund 60 percent of the state budget. Those revenues have been hard hit by the COVID pandemic which sent crude oil prices tumbling ahead of OPEC-imposed production cuts; together, that caused the country’s GDP to shrink by 4.3 percent last year and hit Azerbaijanis in their pocketbooks.

Although GDP is expected to rise again this year, Baku needs every bit of export income it can get.

Although neither side is confirming details, it has become clear that the new agreement lasts to the end of 2024 only and will see Azerbaijan selling gas to Turkey effectively on a spot basis.

Previously – as with the Azerbaijan-Turkey contract that ended in April – international gas import contracts were negotiated to last for decades, with prices usually indexed to the price of crude oil.

But the rapid rise in global production of liquid natural gas (LNG) has meant that gas is more often sold like crude oil: on a spot basis with prices fluctuating based on supply and demand.

That practice has spilled over into pipeline contracts, which can still run for extended periods but on prices calculated daily at regional “hubs”: points in pipeline networks where gas from multiple sources can be sold to multiple buyers, allowing for the calculation of a market price.

The three auctions held so far have offered monthly and quarterly capacity for this year and yearly capacity for 2022 through 2024 – suggesting that the deal just reached only extends to the end of 2024.

Turkey’s state gas importer Botas has been the sole bidder, and has bid only for capacity in the South Caucasus Pipeline, suggesting that AGSC wants to hold the remaining spare TANAP capacity to allow for increased exports to Europe – a move which makes sound commercial sense given that European gas prices currently are high.

Turkey will continue to offer the unreserved capacity in monthly auctions as long as it is available, allowing Botas to increase imports if AGSC agrees to sell them the gas.

The year-long reservations give Baku some security in knowing the minimum volume of gas it will sell to Turkey for the coming three years, while continuing monthly and quarterly auctions allow Botas to increase the volume it imports in line with demand and broader market conditions.

What the spot capacity auctions don’t reveal is what price the gas is being sold for, and why the new agreement appears to be running for only three years.

Unconfirmed reports about the sales prices suggest that Turkey is getting a discount, although it’s unclear if it’s as much as Ankara wanted.

“We believe that the price is calculated according to the Italian PSV hub spot price, minus the cost of transiting the gas to Italy and with a further discount of 5 to 8 percent,” Arif Akturk, a Turkish energy consultant and former head of gas purchasing at Botas, told Eurasianet.

However, the temporary nature of the agreement suggests that either Ankara or Baku may be less than happy with the result, or with other unresolved economic issues between them, such as Ankara’s longstanding promises to construct a gas supply pipeline and railway link to Azerbaijan’s enclave of Nakhchivan. Those efforts appear to have stalled, however, with no construction tenders announced to date.

It also suggests the possibility of a temporary fix aimed at preventing possible Turkish gas shortages as Ankara tries to renew other gas import deals with Russia which are about to end, and ahead of the planned arrival onshore of gas from Turkey’s own Black Sea gas field discovered last year.

“Even a relatively short-term deal now with Azerbaijan gives Turkey a stronger position in ongoing talks for other new gas deals with Russia,” Roberts said.