Azerbaijan at the crossroads

The world is experiencing a deep crisis—no need to go into details, this is common knowledge. In addition to the major consequences of the pandemic, the crisis has already penetrated deep into the political, financial, social and humanitarian areas of life. 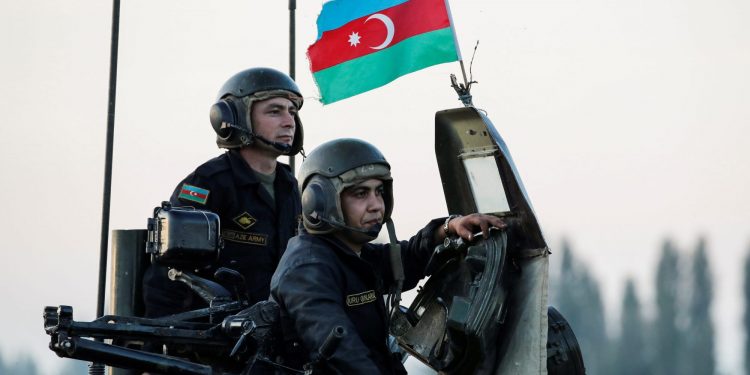 Umit Bektas/Reuters Azerbaijani soldiers look on from a tank during a training at a military training and deployment center near the city of Ganja, Azerbaijan, October 23, 2020.

The world is restarting—it is impossible not to see it.

There is a deep crisis in Azerbaijan as well, and just as there are significant external reasons behind it, there are also quite strong internal reasons. Because, regardless of the outcome, any society changes after the war—although the idea itself sounds paradoxical and absurd, unfortunately, war is the essence of human history, which is discussed in detail in the essay “Totalitarianism and the Avant-garde“.

The world history knows many examples of this. No need to go too far back: let’s take a look at the history of the Russian Empire, with which we share a common past of nearly 200 years. The Russian army, which defeated Napoleon in the early 19th century and marched as far as Paris, comes home to revolt in the main square of St. Petersburg 10 years later, in December 1825. Although the uprising is suppressed, the Decembrist movement eventually gives impetus to many reforms in the empire.

The same process took place in the Stalin era: less than a year after the return of the Soviet army from Berlin in 1945, repressions in the USSR resume, culminating in 1948-52 and ending only with the death of the dictator, when the Khrushchev Thaw (the period from 1954 to 1964, “Ottepel”, the term coined after Ilya Ehrenburg’s novel of the same name written in 1954) begins. It is also common knowledge that the Russian revolutions were a result of the Russo-Japanese War (1904-05) and World War I.

Speaking of which, the text of stage director Konstantin Bogomolov’s manifesto entitled “The Rape Europe 2.0” became a hotly debated topic in Russia last week. In his manifesto, Bogomolov claims that Europe is in a deep ethical crisis (replacing “ethnic Reich” with “ethical Reich” as a metaphor) and argues that it does not make sense for Russia to focus on Western values anymore, because “Russia found itself in the tail end of a crazy train, racing straight into a Boschian hell“.

According to Bogomolov, in the West, if a person’s behavior today does not meet the “ethical standards” set under the pressure of “queer activists, fem-fanatics, and eco-psychopaths”, they are bound to be subjected to aggression: at the very least, their career will be ruined by termination of employment, and they will become a pariah, a taboo. The processes taking place in the West show this clearly. The main message of Bogomolov’s manifesto is the claim that the West, fearful of the horrors of its past (colonialism, racism, Nazism, etc.), has invented a new form of oppression and castration of the individual, shunning the “complicated person”, the main axis of civilization and culture. “Traditional totalitarian regimes stifled freedom of thought. The new non-traditional totalitarianism wants to go further and control emotions.”

The manifesto caused a great deal of controversy in the public, especially among social media users, especially in the wake of Foreign Minister Sergei Lavrov’s scandalous statement that “Russia is ready to cut ties with Europe.” The famous writer Viktor Yerofeyev and philosopher Kirill Martynov were among those who responded to Bogomolov, but, truth be told, their reasoning (of the “Why don’t you talk about Putin’s regime?” sort) was quite weak. Russia’s internal problems thus make it impossible to have any kind of public discussion of the clashes of civilizations in the world. The picture in Azerbaijan is more or less the same.

Of course, this is all theoretical, but without going into great detail, neither the Chicago School-style radical libertarianism nor Dugin’s Eurasianism (needless to say, there are many models covering the wide spectrum between these two opposing poles) is the solution to the deep authority crisis that has engulfed almost all post-Soviet countries.

In Azerbaijan, however, there is currently a profound contrast and confrontation between the Old and the New, and the idea that the organization of life and governance in the post-war period cannot remain the same as before is crystal clear to any thinking person. The crisis in the ruling elites manifests itself not only in the format of biological age and generational change—there is also the standoff between the old tribal system, which has been established in this pyramid of power for many years, and the meritocratic principle that has recently found its use in the governance of the country as a possible way out of the crisis. These processes began long before the war, perhaps after the critical point born out of the April clashes in 2016. It is now clear that there are very deep cracks in the base of the ruling pyramid, and they run right up to the top of it.

Recent events show that this will go beyond the dismissal of high-ranking officials who have held their posts for years, or even the highly publicized arrests of some heavyweights; this is a matter of profound systemic change. One only needs to pay a little attention to what has been said and done recently to come to these conclusions.

For example, it seems that the situation cannot be resolved by arresting the heads of various district administrations, who are completely discredited and corrupt in the eyes of the public; the institution of executive power itself should be abolished, regional governance may transition to alternative forms (including elected governors, etc.), and some ministries may face the same fate as several state-owned companies (AZAL, Azerbaijan Railways, Baku Transport Agency and Baku Metro—the latter can be privatized altogether) merged with Azerbaijan Investment Holding.

Mikayil Jabbarov’s recent statements—on supporting and encouraging small and medium-sized enterprises, on fighting the shadow economy, and even on the inefficient management of state-owned companies, the lack of transparency in reporting, obscure bidding procedures, the need to change mismanagement, and finally, on the damage monopolies inflict on the economy and the need to eliminate them—would be more fitting for an opposition leader than for a minister of economy.

Other ministers are making similar strident statements, which is unprecedented in Azerbaijan. With this progress, even a new parliamentary election is not beyond the realms of possibility—it is no secret that the “old guard” did not lose hold of their positions in the last parliamentary election.

All of this is no longer being done as a behind-the-scenes struggle, but in the open media space, taken out for all the world to see, and it should be clear to everyone that we have reached a crossroads in the historical development of the country under the influence of external and internal factors—this is effectively a state of emergency. As recent events show, this situation may develop in an unexpected direction.

The 44-day victorious war inspired and gave self-confidence to the people, renewed the sense of citizenship in the masses, and most importantly, this historic victory made it clear for everyone that s new generations will be the driving force in our society. And new generations cannot move forward with the old state mechanisms and the old governance.