Baku might obtain some political dividends for joining the EEU, such as the transfer of additional Karabakh territories to Azerbaijani jurisdiction. Yet, in light of the current tensions between Baku and Moscow, Azerbaijani acquiescence to full membership looks unlikely for now. 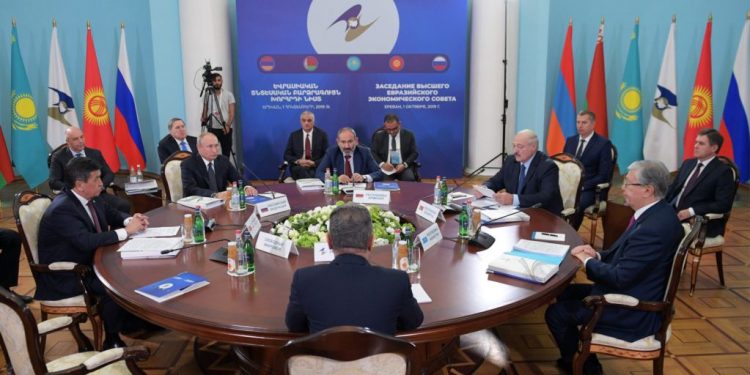 Summit of the Eurasian Economic Union in Yerevan in 2019 (Source: Armenian Mirror)

The next meeting of the Intergovernmental Council of the Moscow-led Eurasian Economic Union (EEU) will be held in the central Russian city of Kazan, on April 29–30 (TASS, March 17). A key agenda item for the EEU member states may reportedly be to discuss the possibility of bestowing observer status on Azerbaijan and, at a minimum, to allow its delegation to take part in this and future meetings, if officials from Yerevan approve. For Russia, this would be an important first step toward Baku’s eventual full membership in the regionalist bloc (Central.asia-news.com, April 19; Turan, April 24). However, from the point of view of Armenia, several important issues will need to be addressed before it would agree to Azerbaijani attendance at this week’s EEU gathering.

One such crucial issue regards the fate of Armenian prisoners held by Baku since the end of the last autumn’s Second Karabakh War. Yerevan claims there are around 200 Armenian prisoners of war in Azerbaijan and demands their immediate return; whereas, Azerbaijan contends that there are only 62, all of whom were allegedly members of sabotage groups arrested in the aftermath of the ceasefire agreement, in December (EurasiaNet, January 14).

The dispute over prisoners is not the only hotly debated spat between the formerly warring parties. In fact, a core element of the November 9, 2020, ceasefire agreement calls for the establishment of a transit corridor between mainland Azerbaijan and its exclave of Nakhchivan, via Armenia’s Syunik province. However, Baku is losing patience over the fact that this unblocking of regional communication lines cannot be fulfilled properly due to political instability in Armenia combined with current frictions in Azerbaijani-Russian relations (see EDM, April 5, 13, 20, 21; see below).

According to the Armenian side, the participation of an Azerbaijani delegation at the EEU will be possible only after each of the aforementioned issues are resolved properly. Though of course Moscow can be expected to have overwhelming influence over this debate. That said, Armenia and Russia’s provocative actions in Karabakh—such as their stated plans to hold military parades in Khojaly, the site of an atrocity against Azerbaijanis in 1992 (Minval, Baki Xabar, April 21)—further complicate the situation.

In fact, Azerbaijan has always been reluctant to join any political and military alliance, including the Moscow-led Collective Security Treaty Organization (CSTO) and EEU, cooperating little with either. Until now, the decades-long conflict with neighboring Armenia in Karabakh justified Baku’s unwillingness to seek membership in Russia-dominated regional formats that included Yerevan. But the new postwar geopolitical order in the South Caucasus may change Azerbaijan’s strategic calculus toward the EEU. And undoubtedly, that will suit Russia’s interests, as Moscow eyes establishing a common “Eurasian Partnership” format that would link the former Soviet area with China. Azerbaijan, which is strategically located at the nexus of multiple north-south and east-west cross-continental transportation corridors, is thus an important part of this broader Russian plan (Turan,. April 24, 2021; see EDM, April 13, 2016, April 18, 2016, February 18, 2021). Moreover, Azerbaijani membership in the EEU is likely to facilitate greater integration of the South Caucasus region into the Russian sphere of influence, lessen Armenia’s long-term isolation, and bolster Russia’s communication links with Iran, Turkey and the wider Middle East. Such membership is, thus, strategically important for Russia but less economically profitable for Azerbaijan.

Baku might obtain some political dividends for joining the EEU, such as the transfer of additional Karabakh territories to Azerbaijani jurisdiction. Yet, in light of the current tensions between Baku and Moscow, Azerbaijani acquiescence to full membership looks unlikely for now. Since the beginning of April, mass media in Azerbaijan has been harshly criticizing the Russian “peacekeeping” mission in Karabakh for preparing to hold a May 9 Victory Day Parade in Khojaly. And it has rebuked Moscow for providing Armenia with sophisticated Iskander ballistic missiles, which appear to have been fired at civilian Azerbaijani targets during the Second Karabakh War (Jam-news, April 21; Armenian Weekly, April 7; see EDM, February 25). Recently, President Ilham Aliyev publicly called on Russia to explain how Armenia acquired the more advanced “M” version (i.e., not the “E” or export version) of the Iskander missile, referring to newly discovered remnants of the missile in Shusha (Caspiannews, April 22). In addition, as stated above, the issue of the Nakhchivan corridor remains an apple of discord between Baku and Nikol Pashinyan’s government in Yerevan: the latter does not want to make any concessions ahead of the looming snap elections in June. Armenia wants to see a re-establishment of the Soviet-era Yerevan–Tbilisi–Baku railway simultaneously with the construction of a transit line in the north, passing through the Armenian town of Ijevan (RBK,April 7). But Azerbaijan insists on reopening the southern railway route along the Iranian border (in line with the November 2020 ceasefire agreement), which is the shortest way to connect the mainland with Nakhchivan.

Considering this compilation of unresolved problems and frustrations topping the agendas between Armenia, Azerbaijan and Russia, a peaceful and stable “Eurasian Partnership” through Baku’s accession to the EEU seems like a distant prospect. If the regional transit projects and reconciliation process with Armenia proceed successfully with Russia’s explicit support, Azerbaijan may find it more difficult to continue to shun Eurasian Economic Union membership. And indeed, Moscow will surely then attempt to increase its political pressure on Baku, using its military presence on Azerbaijani soil as additional leverage. As for Azerbaijan, the vocal and active support it enjoys from Turkey may be a game-changer for developing its foreign and domestic policy. However, Baku understands that, for now at least, it needs Moscow on its side as well in order to consolidate the outcomes of the 2020 war and to ensure a stable reconciliation process with Yerevan.