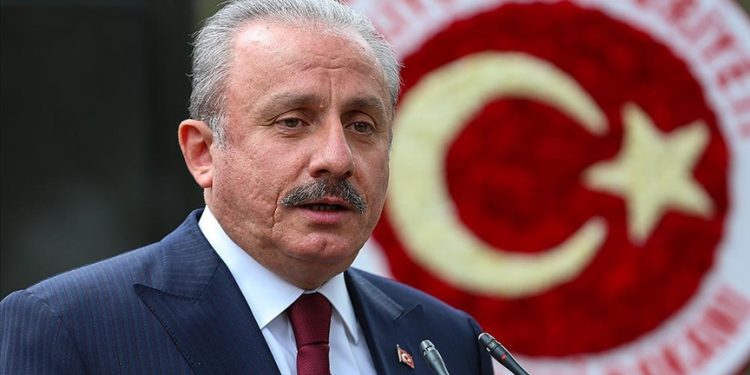 The international community and institutions have proven that Armenia was the occupier of Azerbaijani territory for 30 years, Turkey’s parliament speaker said on Wednesday.

“Beyond friendship and brotherhood, Turkey’s taking the side of Azerbaijan is a matter of Azerbaijan being in the right,” Mustafa Sentop told Turkmenistan’s parliament in an online meeting.

“Turkey is determined to continue the struggle to work for the safety of everyone and to keep all humanity alive in peace and stability.

“We do not hesitate to take the initiative to resolve disputes in our region and the world,” he added.

Turkey views Armenia as a threat to Azerbaijan and the region, he added.
Sentop said Armenia’s attacks on civilian targets in neighboring Azerbaijan over the years violated the Geneva Convention.

“Turkey believes that Armenia, which poses a threat to Azerbaijan and the region, is a state acting irresponsibly.”

Telling how Armenian Parliament Speaker Ararat Mirzoyan left the meeting before his speech, Sentop said he was expecting Mirzoyan to hear him out.

“I expected him to not leave this meeting and to listen to the words said in response to his words. If you say something against a country, you should also have the courage to hear out its response,” he said.

Relations between the former Soviet republics have been tense since 1991 when the Armenian military occupied Nagorno-Karabakh, or Upper Karabakh, internationally recognized as Azerbaijani territory, and seven adjacent regions.

On Sept. 27, 2020, the Armenian army launched attacks on civilians and Azerbaijani forces and went on to violate several humanitarian cease-fire agreements.

During the 44-day conflict, which ended in a deal signed last Nov. 10, Azerbaijan liberated several cities and nearly 300 settlements and villages from the Armenian occupation.