Azerbaijani lawmakers thanked Turkey’s support against Armenian black propaganda during the 44-daylong Nagorno-Karabakh crisis, as they said it was crucial to change the global perspective about the conflict. 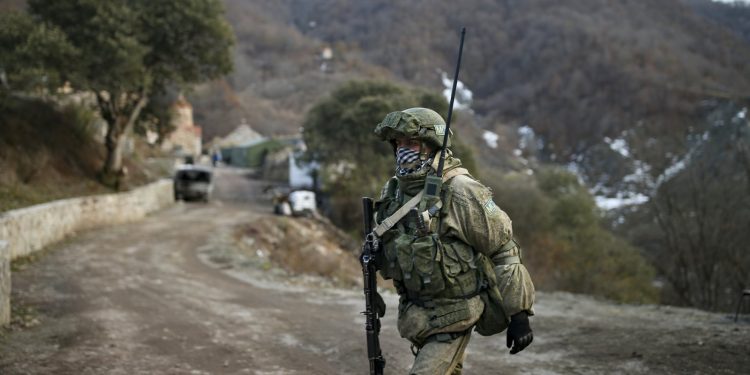 A Russian peacekeeper guards an entry point of Dadivank, an Armenian Apostolic Church monastery dating to the 9th century, after the transfer of the Kalbajar region back to Azerbaijan as part of a peace deal that required Armenian forces to cede Azerbaijani territories they previously occupied outside Nagorno-Karabakh, near Kalbajar, Azerbaijan, Wednesday, Dec. 2, 2020. (AP File Photo)

The New Azerbaijan Party (YAP) lawmaker Dr. Hikmet Babaoğlu told Anadolu Agency (AA) that cooperation between Turkey and Azerbaijan in the media sector has been vital.

“The creation of a Joint Media Platform between brotherly nations Turkey and Azerbaijan is a revolutionary incident in our media history,” Dr. Babaoğlu said, adding that media serves as a tool of soft power.

He noted that Altun played a critical role in terms of fighting against the Armenian disinformation campaign and conveying the truth to the world.

Babaoğlu also said they now aim to establish a joint media center with the participation of Turkic Council member states, including Kazakhstan, Kyrgyzstan, Uzbekistan and Hungary, following a meeting held in Baku on April 9, as he highlighted Altun’s and Azerbaijani Vice President Hikmet Hajiyev’s roles in the initiative.

Another lawmaker, Sevil Mikayilova, also hailed Turkey’s “unmatched” role in the fight against Armenia’s disinformation, saying that it was one of the means Azerbaijan was able to defeat Armenia.

“Turkey’s practical support was especially important as it facilitated the formation of an objective opinion regarding the conflict,” she said.

Yerevan first lied that Turkey transferred mercenaries from Syria to Nagorno-Karabakh to fight alongside Azerbaijan. By doing so, Armenia aimed to delegitimize Turkey’s open support for Azerbaijan and attempted to divert attention from the fact that it receives military and logistical backing from France, Russia and Iran.

Armenia also tried to hide that it put into action a plan to occupy Nagorno-Karabakh through Armenian-origin factions – the Nubar Ozanyan Brigade which operates in Syria and is a part of the PKK’s Syrian branch YPG – within the PKK and ASALA terrorist organizations.

Another piece of disinformation spread by Armenia claimed that a Turkish F-16 downed a Russian-made Su-25 fighter jet. Turkey without delay denied the claims.

Clashes between Baku and Yerevan erupted on Sept. 27, and the Armenian Army launched attacks on civilians and Azerbaijani forces, violating cease-fire agreements. During the 44-day conflict, Azerbaijan liberated several cities and nearly 300 settlements and villages from the Armenian occupation.

The two countries signed a Russia-brokered agreement on Nov. 10 to end the fighting and work toward a comprehensive resolution.

A joint Turkish-Russian center with peacekeepers from both countries has been established to monitor the truce. The cease-fire is seen as a victory for Azerbaijan and a defeat for Armenia, whose armed forces have withdrawn in line with the agreement.