Earlier this month, on March 11, Azerbaijan and Iran, to the surprise of many observers, signed a memorandum of understanding mapping out the plans to establish new transport and electricity connections linking the western part of the mainland Azerbaijan with its exclave of Nakhchivan via the northwestern Iranian region. 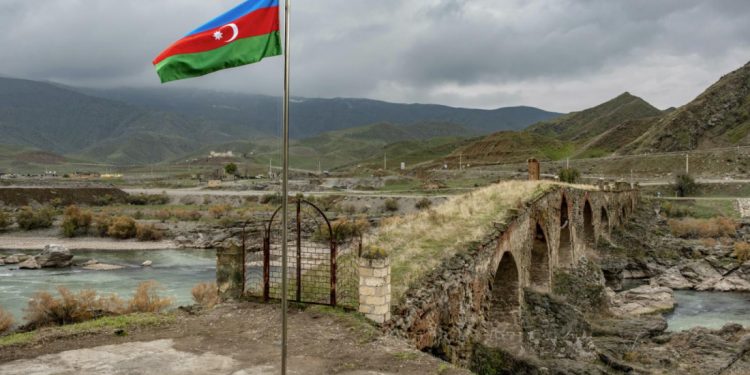 An Azerbaijani flag flies next to the mediaeval Khudaferin bridge in Jebrayil district at the country's border with Iran.

In a way similar to the Zangazur Corridor (approximately 43 km) proposed after the Second Karabakh War, the trans-Iranian route (55 km) is also supposed to include both railway and motorway links in addition to communication and electricity connections.

The new route is planned to be constructed in a proximity to the Iranian-Armenian state border and will generally mirror the Zangazur corridor. Hikmat Hajiyev, Azerbaijan’s presidential aide on foreign policy, said the new multimodal corridor will connect Azerbaijan, Iran and Turkey, and as such will change the transportation-communication picture of the region.

This contrasts with Armenia’s anxious reactions to Azerbaijan’s naming of the trans-Armenian route a “corridor”. Armenian experts and political  elite  maintained that the “corridor logic” in the negotiations over this land passage between mainland Azerbaijan and Nakhchivan exclave is unacceptable as this implies the ceding of the sovereignty over these territories through which this route passes to the Azerbaijani side. A number of assurances, including the fact that, according to the 2020 trilateral [Armenia, Azerbaijan, and Russia] statement, the trans-Armenian passage would be controlled by Armenian ally Russia’s Federal Security Service (FSB), failed to assuage Armenia’s concerns.

It is important to note that Zangazur corridor appeared as a top priority for Azerbaijan’s foreign policy after the 2020 Karabakh War. This was seen in Baku, among others, as a move to end the blockade of the Nakhchivan exclave and obtain a shorter route to connections with Turkey, which would also boost the viability of the Trans-Caspian International Transit Corridor, also known as, the Middle Corridor.

However, Azerbaijan and Armenia have so far failed to come to an agreement  on some critical issues in these negotiations. One major bone of contention between the sides is related  to the customs rules to regulate the passage  through Armenian territory. Although Azerbaijan agreed to the application of Armenia’s customs regulations and other control mechanisms at the railway border crossings, for Baku similar conditions could be applied to the motorway passage only if they would be replicated at the Lachin corridor, which connects Armenia and the Karabakh region of Azerbaijan, according to the trilateral statement of November 10, 2020.

Against this background, the new agreement between Iran and Azerbaijan providing a direct alternative to the Zangazur corridor is of  huge importance for the Azerbaijani side. While it does not mean that Azerbaijan has abandoned its plans to build a transportation passage through southern Armenia, it entails a number of consequences for the regional situation.

First and foremost, it significantly strengthens Azerbaijan’s negotiating position concerning the new transportation routes. Baku has now made it clear that the Zangazur corridor is not the only option for it, and can even abandon it completely, if its expectations and concerns are not duly addressed by Yerevan. In this respect, the  Iranian route could be even more preferable for Baku since Azerbaijan has  by and large had friendly relations with Iran  during the post-Soviet period, despite occasional and largely limited tensions.

Another advantage of the new route for Baku is related with the fact that, unlike the Zangazur corridor which would be controlled by Russia’s FSB, the trans-Iranian route will not be subject to the control of any third party.

Therefore, the agreement on the trans-Iranian passage allows Baku to neutralize the Zangazur corridor as a leverage in the hands of the Armenian side in negotiations. This also deals a severe blow to the narratives of the revanchist forces in Armenia who object to  practically all the post-war peace initiatives between Armenia and Azerbaijan, and present them only  as being beneficial for Azerbaijan and Türkiye.

As a result of the new realities created by the Iran-Azerbaijan deal, Armenia  now   needs the implementation of the Zangazur corridor much more than Azerbaijan. The major reason for this situation is concerning the fact that the Zangazur corridor project does not include only an isolated land passage between the western parts of mainland Azerbaijan and Nakhchivan exclave. It is indeed much more than that: this project in its larger format also includes a railway passage for Armenia to link with Iran, a railway and motorway communication with Russia, as well as similar connections with Turkey.

The re-opening or construction of these transportation channels would put an end to Armenia’s isolation from the regional projects that the country found itself   after Azerbaijan and Turkey closed their borders with Armenia in protest to its occupation of the Azerbaijani territories in the early 1990s. The Armenian government, on many occasions since the 2020 Karabakh War, has affirmed that the unblocking of these routes is indispensable for the Armenian economy. They expect Armenia to become a regional transportation hub if the country manages to terminate its isolation and realize the transportation projects proposed after the Second Karabakh War.

Hence, it can be expected that Armenia will demonstrate more interest in the Zangazur project and its speedy implementation in the future. Such a policy shift could, generally, positively impact the peace negotiations between Baku and Yerevan and create positive dynamics in negotiations on a peace treaty.