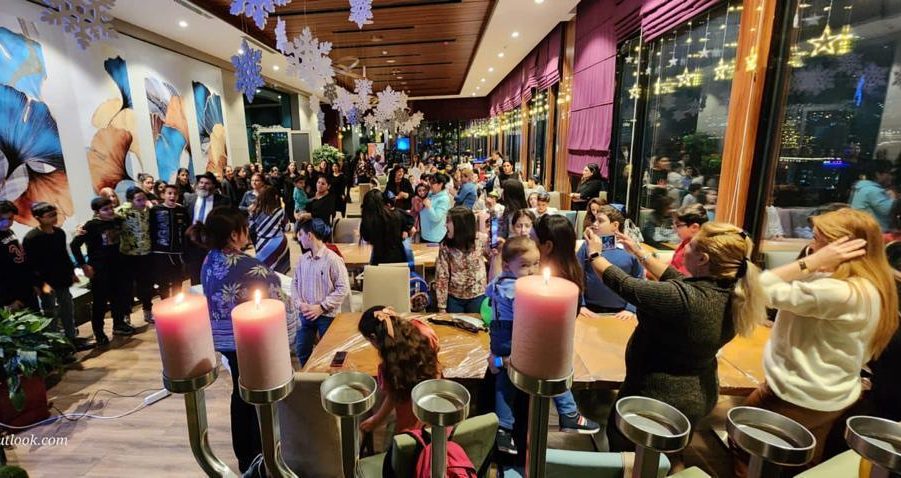 The President of Azerbaijan manifests warm and sympathetic attitude towards the Jewish community and Israel and thousands of Jews led by the Chabad Shliach Rabbi Shneur Zalman Segal celebrate in the streets of the Shia state and light Chanukah candles in splendor and most of the time in the streets these days.

As the Iranians stage anti-Semitic attacks on the President of Azerbaijan due to his standing with the Jews of the country and Israel, thousands of Jews led by the Chabad Shliach Rabbi Shneur Zalman Segal, who has been active throughout the Shiite country, are celebrating outdoors in the country and lighting Chanukah candles in splendor and with the majority of people outdoors these days.

Few are aware of the fact, that Azerbaijan is one of the most friendly Muslim countries vis-à-vis its Jewish population with the Jewish community and is the main supplier of gas and oil to Israel. Forty percent of Israeli energy is based directly on the supplies from Azerbaijan. There is also a strategic cooperation between Israel and Azerbaijan whose value is priceless and it concerns Iran.

Both Iran and Azerbaijan are countries with a Muslim Shiite majority. But the difference between them is abysmal and now this is also expressed in a visible tension between them.

There were countless occasions when the President of Azerbaijan Ilham Aliyev met with representatives of Chabad and other Jewish religious organizations. Rabbis are honored in Azerbaijan. It is one of the few Muslim countries where a person dressed in the traditional clothing of a religious Jew can fearlessly walk the streets without being afraid of anti-Semitic harassment.

This is especially noticeable as compared to the anti-Semitic frenzy which Iran is spreading today. It propagates the poison of hatred of Israel in the Middle East and throughout the world. No wonder that the anti-Semitic shades are clearly visible in Iran’s various disputes with its neighbor Azerbaijan.

Therefore, it is not surprising that a recent video on Iranian television claims that on the way to Jerusalem they will pass the capital of Azerbaijan, Baku. Iranian propagandists call Azerbaijan a “Zionist entity”. In Iranian propaganda videos, the Revolutionary Guards threaten Israel during a military training near the Azerbaijan border.

A cartoon has just been circulated on Iranian social networks and Telegram channels depicting the President of Azerbaijan Aliyev as a Jew in a kippah with a huge nose and wigs. This cartoon, with the caption “Rabbi Ilam Aliyev”, was first published on the Twitter page by Ahsan Mobhadian, an employee of the Institute of International Relations at the University of Tehran.

This cartoon is distributed in Armenia, a country in a long-standing conflict with Azerbaijan. This chimes with the statement of General Fadavi, deputy commander of the Revolutionary Guards, in an interview with the Iranian TV channel “Al Alam”: “The Zionist regime itself does not believe that it will live to see its 80th birthday, that is, it will not even last six years,” he said. And in the same interview he announced his intention to return Azerbaijan to the Persian Empire…

It is interesting that predominantly Christian Armenia is Iran’s ally today, while Azerbaijan is expanding relations with Israel to the level of a strategic alliance.