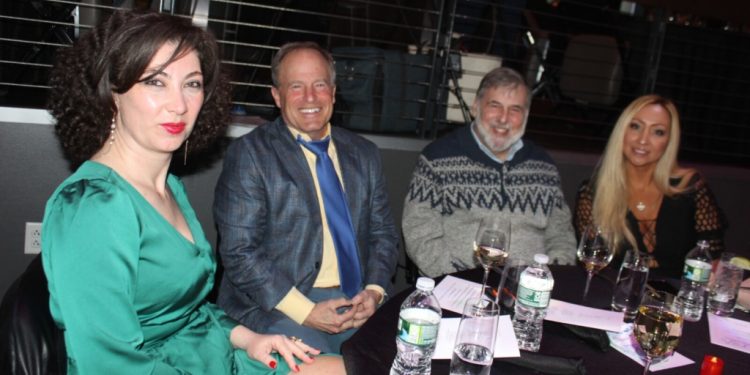 Azerbaijani jazz pianist Emil Afrasiyab toured Europe and the United States for the 15 years before the global pandemic wiped out engagements in London and Rome. Until concerts pick back up, he and his wife, singer Leyla Babayeva Afrasiyab, are living in Boston, where he recently earned a degree in jazz composition from Berklee College of Music.

That’s how a world-renowned husband-and-wife musical duo became available for two 50-person concerts in Portland at Aura, a venue built for audiences of up to 1,000.

“We are so excited to get a second concert in Maine,” he said backstage on April 3.

The previous show, on March 13, was Leyla Babayeva Afrasiyab’s first time performing in the United States. With a stage presence as commanding as when she performed at the centennial concert for the Azerbaijan Democratic Republic in 2018, she thrilled Maine’s small but diverse audience, singing in Azeri, Russian, Turkish, Persian and English.

“This is a celebration of cultures, music and dance of Azerbaijan, Iran, Turkey and the Middle East and to support our talented artists,” said Tarlan Ahmadov, founder and president of the Azerbaijan Society of Maine, which hosted the concerts. “Our diversity is our richness and power, and music is food for our souls.”

In addition to the Afrasiyabs, Afshin Mahmoodi of Westbrook played the daf – a frame drum with jingling qualities of a tambourine – and sang a poem by Rumi in Persian. And Sabina Najafova of Portland performed an Azerbaijani folk dance called “Uzun Dere” (“Long Creek”) danced at weddings when the groom comes to take the bride from her father’s home.

“We love to preserve our culture, and music is part of that,” said emcee Roya Hejabian, who was born in Iran and lives in Westbrook. “This is to introduce our culture to Americans of other nationalities. Some people here don’t speak Farsi or Azeri but are just here to enjoy the culture of music.”

Concert-goers included Mainers originally from other neighboring countries of Azerbaijan, including Kazakhstan, Iran and Turkey.

“We want to show our unity,” said Ghomri Rostampour, who is originally from Kurdistan and lives in South Portland. “We are brothers and sisters.”