During an online conference on the current situation in the South Caucasus, hosted by Rossiya Segodnya news agency, the executive director of the “Eurasian Development” center Stanislav Pritchin and Alexander Karavayev, a researcher with the Russian Academy of Sciences’ Institute of Economics, presented their joint report on the “Settlement of the Armenian-Azerbaijani conflict and the development of the South Caucasus: prospects and challenges.” 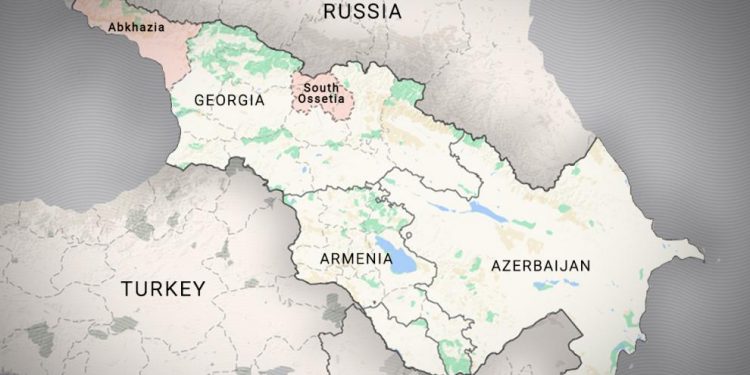 Earlier, Russia’s Foreign Minister Sergei Lavrov met with his Azeri and Armenian colleagues on the sidelines of the meeting of the Council of Foreign Ministers of the CIS to discuss humanitarian and economic issues related to Nagorno-Karabakh. They noted that the Russian-mediated ceasefire agreement in Nagorno-Karabakh, signed on November 9, 2020, was the first document in many years to tackle systemic issues of settlement and offer a primary plan for normalizing relations between the conflicting sides.

During the online conference, Stanislav Prichin and Alexander Karavayev outlined potential areas of cooperation in various fields and identified the role of external actors, primarily of Russia and Turkey, in realizing the existing potential. They also analyzed the prospects of economic development in the South Caucasus.

Stanislav Pritchin said that the idea of writing the report came right after the signing of the peace accord in Nagorno-Karabakh. In addition to the usual collection of information, several roundtables were held, attended by Russian experts, and Armenian and Azerbaijani specialists were polled and asked the same questions. Naturally enough, Baku and Yerevan had diametrically opposite views of the results of the ceasefire agreement, with  Azerbaijan seeing them as a reflection of the changes brought about by its military victories, while Armenia views them as a major defeat that forced it to make major concessions. There was even talk about the resignation of Prime Minister Nikol Pashinyan and his government. Pashinyan has so far managed to stabilize the situation, with early parliamentary elections slated for this coming summer, which will most likely keep him in power. Polls also showed that even if Pashinyan’s party loses out, Armenia will still be forced to comply with the terms of the agreement simply by virtue of its position. Indeed, Yerevan has been quick to give the Akdam, Geybaldar and Lachin regions back to Baku.

Speaking of risks and challenges, the expert noted that we are primarily talking about domestic political risks both in Armenia and Azerbaijan, as well as external ones – exacerbation of contradictions between outside players and, finally, the danger of a new conflict flaring up directly between Yerevan and Baku. … First of all, Armenia finds itself in the former group of risks. A  survey of experts done in February showed that 67 percent of respondents  believed that Nikol Pashinyan would not stay in power, while only 33 believed he would. The situation in Azerbaijan is calmer: they expect Armenia to fulfill all the terms of the trilateral agreement. By the way, Azerbaijan has a lot of work to do to restore the region’s infrastructure and resettle the refugees, which will prove a heavy burden on the country’s budget.

As far as external risks go, the gravest concern is the regional rivalry between Russia and Turkey. Seventy-two percent of the Armenian experts surveyed believe that this is fraught with destructive consequences, and only 28 said that Russian-Turkish interaction will help stabilize the region. The overwhelming majority of Azeri experts have no problem with the Russian and Turkish influence on the peaceful settlement in Nagorno-Karabakh. The role of the OSCE Minsk Group in the settlement of the Karabakh problem is assessed differently in Armenia and Azerbaijan. While the Armenians pin hopes on the Group, the Azerbaijanis do not see any benefit from it.

The dispute between Armenia and Azerbaijan over Nagorno-Karabakh remains the biggest sticking point, with Azerbaijan considering this territory as its own, which is confirmed by the relevant resolutions of the UN Security Council issued in the wake of the Soviet breakup. The Armenians, conversely, believe that even after the conclusion of the November trilateral agreement, Nikol Pashinyan does not recognize Azerbaijan’s right to Nagorno-Karabakh. A survey of the two countries’ experts showed that in each of them the absolute majority – more than 80 percent – thinks that within the next five years the status of Nagorno-Karabakh will not acquire a mutually acceptable legal form. Pritchin also considers the problem of border delimitation in disputed territories as being intractable.

Wrapping up the political section of the report, Stanislav Pritchin outlined three possible scenarios of political development in the South Caucasus: negative, neutral and optimal. In a negative scenario, one or more parties opt out of the trilateral accord. According to the neutral scenario, some of the provisions of this agreement will be implemented, while some will not. The positive scenario sees the implementation of all provisions by all the signatories to the deal. The majority of experts in Armenia (about 80 percent) and a significant number (over 40 percent) of those in Azerbaijan, gravitate towards the second, neutral variant.

The economic part of the report was presented by Alexander Karavayev, who emphasized that it is for the first time in 30 years that a post-Soviet state is restoring its territorial integrity, including in economic terms. Not only did the territory of Nagorno-Karabakh suffer from the ethnic conflict of 1991-92, but it was not developing economically and did not have any investment status. The development took place only at the microeconomic level; there were no large-scale recovery programs sponsored by the state, including those aimed at luring major foreign investors. Karavayev warns that given the enormity of the tasks at hand one should not expect any quick results – we are talking about a decade, no less.

The Azeri leadership has outlined the first stage of restoration to run until 2025. In 2021, US 1.3 billion will be allocated for the reconstruction of energy facilities, the construction of roads, trunk infrastructure, including the creation of transit transport communications across the territory of Armenia and Nagorno-Karabakh. To fill them with goods, Armenia, as the party that has suffered the most from the conflict, must see the prospects for making up for the losses. This could be achieved through exports, primarily of raw materials, such as copper ore and rare earth and precious metals (molybdenum, gold, etc.). In practical terms, the export of raw materials from Armenia to Mediterranean ports would be facilitated by modernizing the old Soviet railway via the Nakhichevan autonomous region to the Turkish port of Iskenderun, where there is a terminal of the Magnitogorsk Iron and Steel Works. Alexander Karavayev warned, however, that the implementation of large-scale economic projects would attract big investors and competition between them could stir up contradictions between large regional players. He still believes that “the game is worth the candle.”

The main conclusion that can be drawn from the report is that the signing of the trilateral agreement has opened a “window of opportunity” for the gradual normalization of political and economic relations between Armenia and Azerbaijan, including the settlement of the situation in Nagorno-Karabakh.