Azerbaijani Ambassador Khazar Farhadov on Monday said that his country openly supported Pakistan on the Kashmir issue in accordance with the United Nations resolutions. 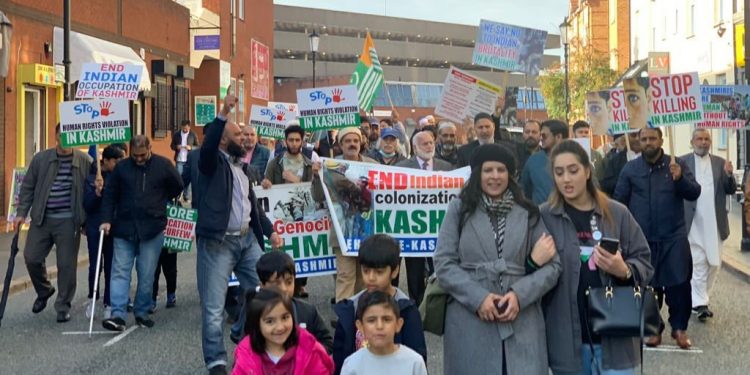 Hundreds of Kashmiris as well as Pakistani and global human rights activists attended the protest outside the Indian Consulate in Birmingham. PHOTO: EXPRESS

“Azerbaijan openly supports Pakistan on the Kashmir issue in accordance with the United Nations resolutions,” the envoy said while addressing an event held to mark the 30th anniversary of the restoration of Independence of the Republic of Azerbaijan. A cake decorated with flags of both the countries was also cut at the ceremony.

National Assembly Speaker Asad Qaiser and a large number of foreign ambassadors, including Turkey and the European Union, had attended the event.

“Pakistan has openly supported all the matters pertaining to Azerbaijan’s integrity,” he said, “Pakistan is the first country that accepted Azerbaijan.”

Further showering praise for the country, the envoy added that Pakistan’s parliament had also approved resolutions pertaining to Azerbaijan.

He was of the view that Azerbaijan was a strong country under President Ilham Aliyev leadership. The Azerbaijani people were also celebrating the first anniversary of the return of occupied territories from Armenia to Azerbaijan this year, he added.

He also spoke about the trilateral agreement between Pakistan, Turkey, and Azerbaijan.

A high-level liaison forum was established between Azerbaijan, Turkey and Pakistan in 2017, he said, adding that mutual relations among the three countries were getting “closer and stronger” because of the launch of the forum at the level of foreign ministers of the three countries.

In his address, NA Speaker Qaiser said that Pakistan and Azerbaijan had close and friendly relations.

“Pakistan and Azerbaijan want to live peacefully, however, both the countries are facing issues like Kashmir and Karabakh,” Qaiser said.

He was of the view that the Azerbaijani government and its people deserve congratulations on the liberation of disputed territories.

Sharing his experience of the recent visit to Baku, Qaiser said that an agreement was signed between parliaments of both countries.

Under the pact, he added that it was agreed to promote trade, investment, and people-to-people contacts between the two countries.