Azerbaijani, Armenian, French, and EU leaders discussed on Thursday the establishment of peace between Baku and Yerevan. 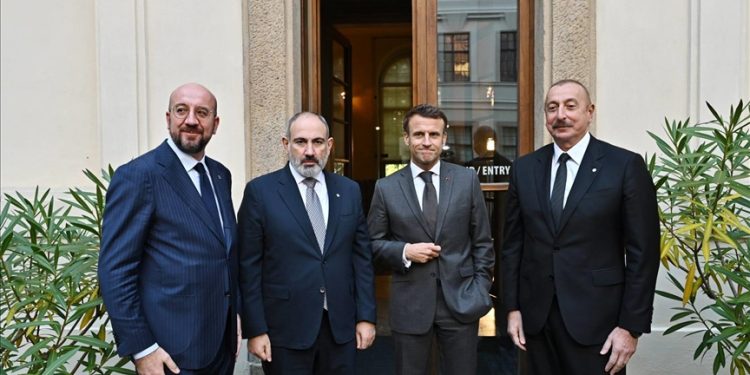 After the one-hour meeting in the Czech Republic’s capital, the leaders did not hold a joint press conference.

Following the meeting, Azerbaijani President Ilham Aliyev told reporters from his country that the peace process with Armenia “has now been accelerated.”

Aliyev said that important issues were on the meeting’s agenda, saying: “I think this meeting will be important in terms of reaching a peace agreement.”

“Engagements are still ongoing. We agreed to meet again after dinner,” he added.

Aliyev also said that the foreign ministers of the two countries would meet “soon.”

“We suggested that the working groups of the two countries meet and work on the preparation of the peace agreement text for a few days. Such is our intention,” he said.

These remarks follow previous contacts for the initiation of the peace process between Azerbaijan and Armenia, with Aliyev and Pashinyan having met EU Council head Michel four times before in Brussels.

Relations between the former Soviet republics have been tense since 1991, when the Armenian military occupied Nagorno-Karabakh, a territory internationally recognized as part of Azerbaijan.

Baku liberated several cities, villages, and settlements from Armenian occupation during 44-day clashes in the 2020 fall, which ended after a Moscow-brokered truce. The peace agreement is celebrated as a triumph in Azerbaijan.