The discovery of another mass grave of Azerbaijanis killed during the First Karabakh War has provided a grim reminder of why the conflict with Armenia remains bitter despite Azerbaijan’s territorial gains two years ago. 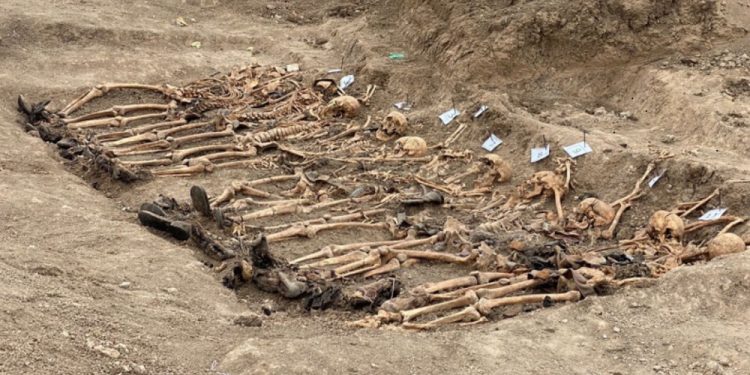 This week Turkey’s Andolu news agency filmed the remains of 12 soldiers buried together in the village of Edilli in the Karabakh region of Azerbaijan. Bullet holes in the skulls suggested that they had been executed by shooting. Their hands and feet had been tied.

An official from Azerbaijan’s State Commission for Prisoners of War, Hostages and Missing Persons, Namig Efendiyev, said excavation efforts had been underway in the village since February to find people who disappeared in the First Karabakh War, which ended in 1994. The remains of 25 of them had been discovered so far and excavations will continue.

The head of foreign policy at Azerbaijan’s Presidential Administration, Hikmat Hajiyev, said Edilli was used by Armenia as a concentration camp for Azerbaijani hostages during the First Karabakh War. He added that despite the discovery of the mass grave in the village, another 4,000 soldiers and civilians remain missing, with Armenia refusing to provide the locations of burial sites.

Armenia occupied much of the area in 1991 but it remained internationally recognised as part of Azerbaijan, which regained most of it in the Second Karabakh War in the autumn of 2020. That conflict ended with a Russian-brokered truce but there have been further clashes this year, with both the European Union and the United Stares attempting to mediate.

On Sunday, the foreign ministers of Azerbaijan and Armenia met in Geneva to begin drafting a future peace treaty. It’s estimated that the conflict in the 1990s claimed 30,000 lives, with another 6,500 left dead in 2020.