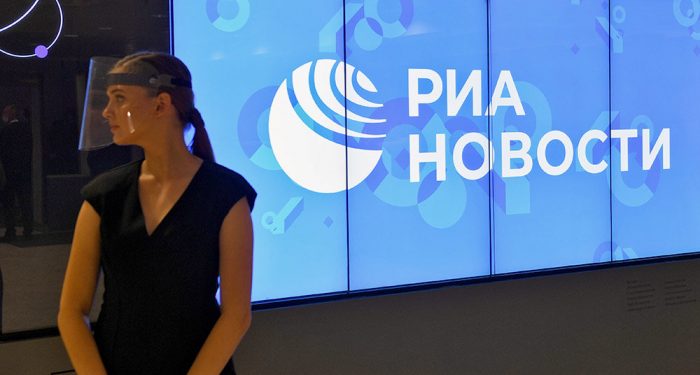 Azerbaijan and Russia have feuded over the war coverage of their respective state news agencies, with Azerbaijan blocking one Russian state media website and Russia now threatening to retaliate in kind.

On June 4, many Azerbaijani internet users began to report on social media that they couldn’t load the website of Russian state news agency RIA Novosti. Later that day, Azerbaijan’s Ministry of Digital Development and Transport confirmed that they had in fact blocked the site, citing Azerbaijan’s law “On Information, Informatization, and Information Protection.”

“Under this law […] access to an online information resource or its relevant part is limited in the event of a threat to the legally protected interests of the state and society,” the ministry told Report.az in a statement. Though the ministry didn’t specify which RIA Novosti items it considered a threat, it added: “It is not the first time that this agency disseminates information directed against the territorial integrity of Azerbaijan, promoting slanderous and separatist tendencies.”

There appear to have been two recent articles in particular that aroused Azerbaijan’s ire.

On May 28, RIA Novosti published an interview with a member of parliament in the self-proclaimed Nagorno-Karabakh Republic (NKR). That Armenian de facto government has controlled Karabakh, which the rest of the world considers to be Azerbaijani territory, since the first war between the two sides in the 1990s. The article was headlined “NKR MP: the world took up arms against Russia, but did not condemn the aggression against Karabakh,” referring to the second war, in 2020, when Azerbaijan retook most of the territory it had lost in the 1990s.

Then, on June 3, the agency ran another interview with a de facto NKR official, State Minister Artak Beglaryan. In the interview, Beglaryan voiced a number of pro-Armenian talking points, such as accusing Azerbaijan of being interested in Karabakh merely for “prestige, ambitions” and vowing to fight for Nagorno-Karabakh’s recognition as a state and possible unification with Armenia.

That same day, Azerbaijan’s Foreign Ministry issued a statement objecting to RIA Novosti’s coverage (without explicitly mentioning the article), saying that it contradicted “the spirit of friendly relations between Azerbaijan and Russia,” in particular an alliance agreement signed on the eve of Russia’s invasion of Ukraine. Under that agreement, the MFA statement recalled, the two sides vowed to fight threats against the “sovereignty and territorial integrity of each other” as well as to “counter the threats of separatism.”

Following the blocking, RIA Novosti removed Beglaryan’s interview from the website. As of June 13, the website was still blocked in Azerbaijan.

Ties between Moscow and Baku, always rocky, have been even more unsteady since Russia’s invasion of Ukraine in late February. The alliance treaty notwithstanding, Azerbaijan has tried hard to maintain a balanced, distant position on the war, while its state media has taken a conspicuously pro-Ukraine stance. And that comes against the backdrop of deeper disagreements between the two on Azerbaijan’s still-unresolved conflict with Armenia, including the sensitive presence of 2,000 Russian peacekeepers in Karabakh.

The tension already had resulted in some news website blockings: some pro-government Azerbaijani news outlets were among the many foreign websites that the Russian government has blocked since the beginning of the war.

Russia’s Roskomnadzor has reportedly sent letters to some Russian-language Azerbaijani news websites demanding that they delete or alter articles about the war in Ukraine.

Kamala Mammadova, editor-in-chief of the news site 1news.az, told BBC Azerbaijani that the publication received a letter to that effect at the beginning of June. She said she sent a reply refusing the demand, and the website had not yet been blocked.

“I don’t know if it’s because my letter was so impressive, or maybe they are blocking so many websites that our turn hasn’t come yet,” she said.

Meanwhile, on June 10, Azerbaijan’s State Migration Service reported that the editor-in-chief of the Azerbaijani service of another Russian state outlet, Sputnik, and her husband were denied an extension of their residence permit in Azerbaijan.

While the migration service’s report was reported by local media, neither Azerbaijan’s Migration Service nor Sputnik Azerbaijan have talked to media regarding the couple’s case.

Sputnik’s targeting was no surprise, said journalist and analyst Farid Gahramanov in an interview with VOA. “Sputnik Azerbaijan represents Russia’s interests, and in some cases their content has contradicted Azerbaijan’s interests,” he said. “It seems that the Azerbaijani authorities have taken action against foreigners who don’t respect the country’s laws.”

The Azerbaijani government has lately been particularly sensitive to both Russian official statements and Russian media reports about Karabakh and Azerbaijan generally, issuing a higher-than-average number of clarifications, regrets and condemnations.

When Russian Foreign Minister Sergey Lavrov made a poorly worded statement about the border delimitation process between Armenia and Azerbaijan, Azerbaijan’s Foreign Ministry corrected him. And after a member of Russian Parliament threatened Azerbaijan with nuclear weapons,Baku responded with a lawsuit and international search warrant.

Heydar Isayev is a journalist from Baku.