Tokayev calls for increasing trade with Azerbaijan to $1 billion

Kazakh President Kassym-Jomart Tokayev stressed Wednesday in Azerbaijan his intention to raise bilateral cooperation with the country to the next level and boost trade between the two nations to $1 billion. 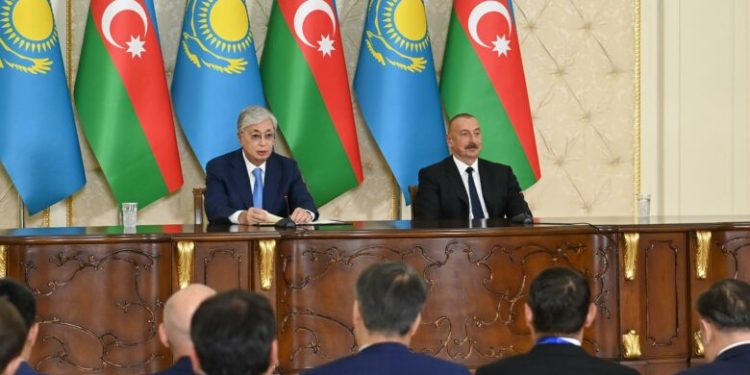 At a meeting with his Azerbaijani counterpart, Ilham Aliyev, the Kazakh leader maintained that in recent years trade between the two nations had increased almost threefold, but stressed that it should not be a reason for complacency.

“I believe that there are opportunities to increase trade,” Tokayev said.

“The governments of our countries should work so that in the very near future we can bring the volume of trade between our countries to $1 billion,” he said.

The Azerbaijani leader, in turn, was confident that the two nations would boost trade and economic relations.

“There are great opportunities to increase trade,” he said, while also considering that there are important prospects in the field of investment, as both countries “have a positive investment climate and a large amount of foreign investment.”

“I think the time has come to join forces in this direction and participate in joint investment projects in Azerbaijan, Kazakhstan and, possibly, in other countries,” Aliyev said.

The Azerbaijani head of state also highlighted the “big plans” for the development of transport and logistics infrastructure between the two nations.

After the talks, the two leaders issued a statement on strengthening strategic relations and deepening cooperation between Kazakhstan and Azerbaijan and a comprehensive program for cooperation development between 2022 and 2026.