The meeting of President of Azerbaijan Ilham Aliyev, Prime Minister of Armenia Nikol Pashinyan and President of the European Council Charles Michel in Brussels will remain the focus of attention of regional, and not only regional, experts for a long time to come. 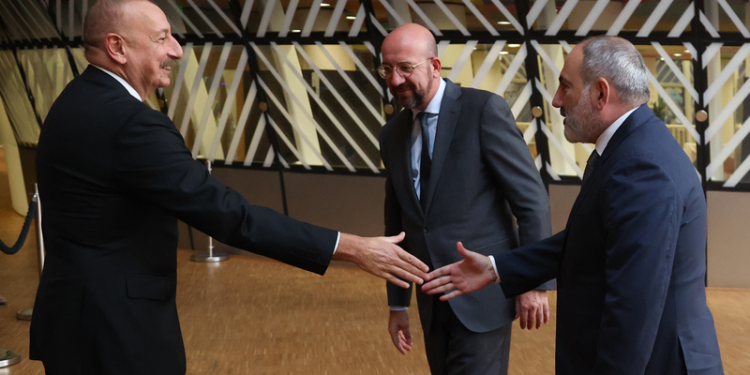 Azerbaijan is confidently pushing its agenda both on the ground and at the negotiating table. President Ilham Aliyev’s “offensive diplomacy” and the actions of the Azerbaijani Armed Forces are fused into a single strategy, and Armenia has nothing to counter it. The Brussels meeting took place after Lachin and the villages of Zabukh and Sus had been returned to Azerbaijani control. Despite recent attempts to revive the Minsk Group format, this failed organization is not mentioned at all in the text of the post-meeting statement. Yerevan once again failed to bring the issue of “the status of Karabakh” back on the agenda. What was mentioned, however, was the unblocking of communications, the delimitation and demarcation of borders and, most importantly, the beginning of concrete work on the text of a peace treaty—on the basis of the five principles proposed by Azerbaijan, which Armenia had been forced to accept.

Finally, the very fact that the European Union as mediator is promoting work on a peace treaty shows that the capital of the united Europe, like Baku, believes that the conflict is already over, and it is time to start building normal relations and a long-term peace.

Pashinyan’s press service tried to sweeten the pill by proudly reporting that “the Nagorno-Karabakh problem” had been discussed at the trilateral meeting. However, even the Telegram channels linked to the separatist leaders are compelled to admit that “Charles Michel’s statement following the meeting did not mention the Nagorno-Karabagh conflict at all. Furthermore, the statement of the head of the European Council makes reference to the Armenian ‘detainees’, not ‘prisoners of war’, essentially using the rhetoric of the Azerbaijani authorities.” Translation: another spectacular failure of Armenian diplomacy, certainly not the first, and definitely not the last.

The EU, too, can add the results of the talks to the list of its achievements. In his final statement, Michel mentioned Azerbaijan’s and Armenia’s relations with the EU as one of the topics of the talks. We can hardly speak seriously about Armenia, which is fully dependent on Russia and already screwed its European partners when it promised to sign an Association Agreement with the EU in 2013, but then joined the EAEU instead. Meanwhile, the President of Azerbaijan went on a visit to Italy after the talks in Brussels, and Bulgaria plans to purchase Azerbaijani gas through the new interconnector… Against this background, the impressive success of the EU mediation leaves no doubt: the EU is becoming an influential player in the South Caucasus, and it is entering the region through the Azerbaijani “door”. The EU is confidently taking over the mediation in the issues such as border delimitation, opening of communications, etc. Moreover, the informed Armenian media already announce the talks in Brussels between the Deputy Prime Ministers of Azerbaijan and Armenia—meaning that if earlier the basic principles used to be discussed in the capital of the EU, and the specifics were elaborated mainly in Moscow, now Brussels pushes its mediatory role here as well.

This fact seems to vex Russia to no end. Ahead of the Brussels meeting, Russian Foreign Ministry spokesperson Maria Zakharova grumbled at a regular briefing: “The EU’s activity in the South Caucasus is shaped by its geopolitical ambitions, and, in our opinion, has nothing to do with the real desire to contribute to the normalization of Azerbaijani-Armenian relations.” Then she continued: “I would even say that these are the Europeans’ pseudo-initiatives. They are more like a brazen attempt to take credit for the mediation, the laurels with nothing underneath them. We work as mediators, and this work yields concrete results and is appropriately appreciated by the parties.” Even more revealing is the wave of publications in Russian media with eloquent headlines like “Karabagh is being discussed outside of Moscow”, “Temptation by Brussels”, and so on.

We will refrain from ironic remarks and will not wonder what “concrete results” Mrs. Zakharova is talking about, if during the year and a half of the Russian peacekeepers’ stay in Karabakh the Armenian armed forces have not been withdrawn and only had to budge after Azerbaijan’s Operation Vengeance. We will not ask why the Zangezur corridor, stipulated in the very same Trilateral Statement has not been opened (for all the, shall we say, unprecedented influence Moscow has over Yerevan), and why Russia obediently suspended even the border demarcation according to the General Staff maps, giving in to Armenia’s whims.

No, what is more noteworthy is this. Of course, Zakharova’s irritation and even the obvious go-ahead Russian media got to trash European mediation in Karabakh can be explained by the strained relations between Russia and the EU, but only partly. Much more important is the “bloc thinking” once again demonstrated at Smolensk Square. They seem to think that the South Caucasus is a sort of their backyard and they are fully confident that the decisions as to who is allowed to be involved in the political processes in the region and who is not must be made on the banks of the Moskva River. Furthermore, for more than a quarter of a century Karabakh was perceived by Moscow as an ideal means of pressuring both Baku and Yerevan. If the conflict is safely and fully resolved, this means of manipulation will be gone. So will be the reason for the Russian peacekeepers’ presence. Lastly and most importantly, they must be aware that the events are unfolding, to put it mildly, not in favor of Russia’s favorite outpost, Armenia, which first suffered a military defeat and now is suffering a diplomatic one.

Whether Russia will try to move to “active torpedoing” of the EU mediation, while acting on behalf of and through Armenia, is another matter. But here is a reminder: there have already been attempts to play this kind of games in the region after the 44-day war, and it was Armenia who had to pay dearly for its part in them. Azerbaijan continues to confidently pursue its post-conflict settlement agenda. And yes, this is not only about Brussels.