President of Azerbaijan Ilham Aliyev departed for Italy on a working visit at the official invitation of President Sergio Mattarella. The two days’ visit is timed to coincide with the 30th anniversary of the establishment of diplomatic relations between Azerbaijan and Italy. 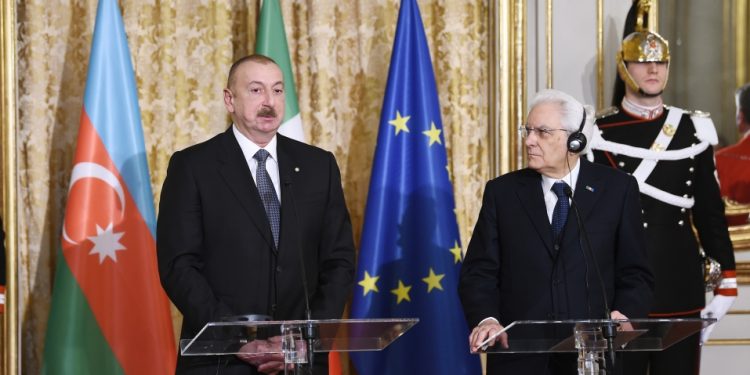 In the course of the current visit, the parties are expected to discuss topical issues in a number of areas in the process of implementation of the declaration, and determine the next steps to further expand cooperation.

According to the protocol, Ilham Aliyev will have several meetings with Italian President Sergio Mattarella and Acting Prime Minister Mario Draghi as part of the visit.

The visit of the President of Azerbaijan coincided with the political crisis that erupted in Italy recently: after failing to reach a consensus among the parties in Parliament on legislative issues, Prime Minister Mario Draghi announced his resignation.

Early parliamentary elections are scheduled for September 25. Until then, Mario Draghi will be acting prime minister, and his cabinet will continue to function, but with limited powers. According to tradition, during the interim government’s time in power, Italy does not receive high-ranking foreign visitors, does not meet with official foreign delegations, and does not take decisions on domestic and foreign policy issues.

The fact that the visit of the President of Azerbaijan to Italy still happened testifies to the importance that Rome attaches to the strategic relations with Baku. After all, Italy considers Azerbaijan its most important partner in the South Caucasus, and its relations with it are one of the priorities of its foreign policy based on national interests.

Overall, Azerbaijan-Italy relations have always been multifaceted, exemplary and constructive. Among all EU Member States, Italy is undoubtedly Azerbaijan’s number one political, economic and trade partner. At the same time, close cooperation between Rome and Baku has been established at various international levels. In particular, Italy has always actively supported the strengthening of cooperation between Azerbaijan and the European Union and NATO.

As we know, the relations between the two countries have been marked by summit meetings over the years. President Ilham Aliyev’s multiple visits to Italy have ultimately played a crucial role in moving these relations to the current level of strategic partnership.

This is the seventh visit of the head of Azerbaijan to Italy. During his previous visit in February 2020, the two countries signed 28 documents covering politics, defense, trade and economy, as well as energy, high-tech, transport, infrastructure, culture, science, tourism, sports and food security.

But experts consider the “Joint Declaration on Strengthening Multi-Sectoral Strategic Partnership between the Republic of Azerbaijan and the Italian Republic” to be the peak of the bilateral cooperation.

The document was signed by Ilham Aliyev and the then Italian Prime Minister Giuseppe Conte.