President Ilham Aliyev's visit to Uzbekistan continues, and the regional media are closely monitoring the protocol details, the statements, and the official communiqués. 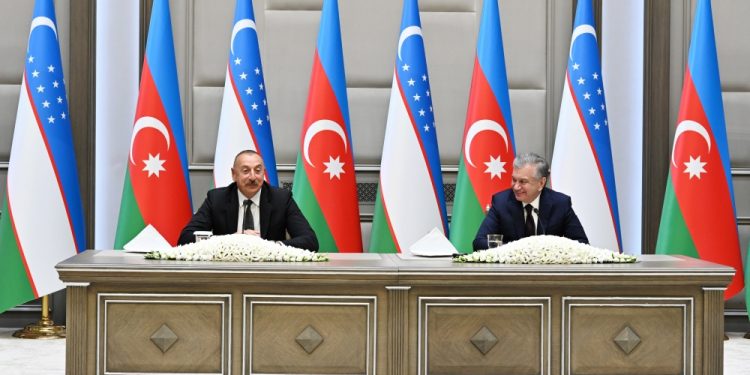 The summit resulted in the signing of nine documents, including a “Declaration on the deepening of strategic partnership and expansion of comprehensive cooperation”. The other agreements cover a wide range of bilateral contacts, from agriculture to military cooperation. Prior to the summit, there were meetings of the ministers of the economic bloc and a joint business forum, where agreements worth half a billion dollars were signed.

A state visit is an a priori “reference point” in the history of relations between two countries. But there are some specifics to the visit of the Azerbaijani President to Uzbekistan that are clearly beyond the scope of the bilateral agenda.

Uzbekistan is the largest state in Central Asia in terms of both population and area after Kazakhstan, which was never part of the “Central Asian economic region” even during the Soviet era. Tashkent was considered the unofficial “capital” of Central Asia at the time. It was back in the Soviet era that an international airport was built there too.

Another known fact is that Uzbekistan, unlike Kazakhstan, Tajikistan, and Kyrgyzstan, is not a member of the EAEU. It joined the CSTO twice and twice withdrew from it. Now that Shavkat Mirziyoyev has come to power, the country is actively carrying out reforms and rapidly opening up to the world, establishing extensive cooperation with Turkey, the United States, and the European Union, and participating in the activities of the Turkic Council.

All of this prompts the authorities of Uzbekistan to look for their own “window to Europe”, which, let’s face it, Moscow can no longer open and close as it sees fit.

The example of Turkmenistan, cut off from the gas transit by Moscow, and that of Kazakhstan, with its oil exports taking a blow (the main export pipeline stopped at Novorossiysk too), give us ample food for thought. So does the fact that there are already discussions in Batumi about the transit of Kazakh oil and Turkmen gas via Azerbaijan.

Our country has a commercial port, a ferry line across the Caspian Sea, the Baku-Tbilisi-Kars railroad, and prospects of the Zangezur corridor (which will happen regardless of Armenia’s desperate tantrums and stubborn pushback). Yes, Uzbekistan has no direct access to the Caspian Sea, but nothing is stopping Tashkent from using the transit possibilities of Kazakhstan or Turkmenistan. Especially since Tashkent has been vigorously working on the development of its own transit potential for several years and has achieved significant results. The conjunction of transit capacities of Baku and Tashkent promises an impressive “logistics revolution”. This is particularly relevant today, against the backdrop of the war in Ukraine and the anti-Russian sanctions, when too many countries really need a route bypassing Russia.

Not surprisingly, Russian great-power nationalists are already throwing fits on social media: according to them, “it is not just about restoring the connection within the former GUAM (which Uzbekistan had left long before that entire scheme died), not just about adding it to its Turkish wing, it is also—and most importantly—about Baku wanting to fit into Tashkent’s new alignment with the United States.”

We can reassure the authors of this alarmist hysteria: Azerbaijan has not acted and is not acting as an instrument of someone else’s policy. But there is no doubt that our country is taking on the role of a gateway to the outside world for the countries to the east of the Caspian Sea. We can safely say that our country’s foreign policy now has an “East Caspian” strategy of its own. This will change a lot both for Azerbaijan and for Uzbekistan, as well as for other states.