The State Security Service of Azerbaijan exposed an Iranian spy network in our country. I will not go into the details of this exposure, as they have been discussed in news reports. I will only mention the fact of what happened. 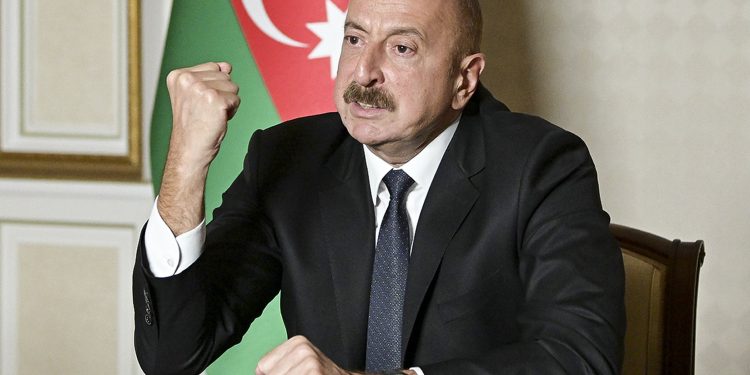 The investigation revealed that Azerbaijani citizens hiding in Iran from criminal prosecution and acting at the behest of the Iranian secret services had set up “Discussions” and “Announcements” private chat groups in WhatsApp, attracting Azerbaijani citizens there and spreading through these groups radical, religious extremist ideas that contradict human rights recognized by international law, that contradict the Constitution of the Republic of Azerbaijan and were aimed at creating a religious state in Azerbaijan.

What does this fact indicate? That Iran is continuing its subversive activities against Azerbaijan, against our statehood. And against this background, the tantrums thrown by a group of Iranian lawmakers were not surprising at all. They remind the proverbial brass band musicians who wanted to play wedding music but ended up playing their usual music for a funeral. A funeral of the vestiges of decency and common sense.

What prompted the hysterics of the Iranian lawmakers? The speech of President of Azerbaijan Ilham Aliyev at the 9th summit of the Organization of Turkic States in Samarkand. “The young generation of the Turkic world should have the opportunity to study in their mother tongue in the countries of their residence. Unfortunately, majority of the 40 million Azerbaijanis living outside Azerbaijan are deprived of these opportunities,” the head of our state clearly stated the real problem.

I will point out right away that none of the participants of the summit objected to what our head of state had said. In other words, they expressed solidarity with him. So, by “responding” to the President of Azerbaijan, the Iranian MPs are “responding” to all the member countries of the OTS, which is stupid, although not uncommon for Iran. The stupidity of the Iranian MPs’ remarks was evident in everything, but most of all in their inability to produce decent counterarguments.

They said nothing about the core of the problem raised by the President of Azerbaijan. And how can one object if the head of our state told the truth?! The fact is that for more than a century there has been no school or other kind of education in the Azerbaijani language in Iran, except in 1945-1946, when the Pishevari government allowed it. The situation did not change after the 1979 Islamic Revolution either.

The current Constitution of Iran states that “the official language and script of Iran, the lingua franca of its people, is Persian. Official documents, correspondence, and texts, as well as text-books, must be in this language and script. However, the use of regional and tribal languages in the press and mass media, as well as for teaching of their literature in schools, is allowed in addition to Persian”. Yet this article has never been applied in practice. As a result, almost forty million Azerbaijanis in Iran are deprived of their fundamental right to education in their mother tongue. It is also clear that since Persian is not their native language, Iranian Azerbaijanis do not start their careers on an equal footing in terms of language. This is discrimination approved at the state level.

For comparison, there are currently about 30 Armenian (all-boys, all-girls, co-ed, elementary and secondary) schools and kindergartens in Iran. Since 1995, departments of Armenian studies have been functioning within the Literature faculties of the universities of Tehran (Azat) and Isfahan. And this is with only 60-80,000 Armenians living in Iran. There is an obvious imbalance one cannot deny without the risk of being called a liar.

But then, this is not a problem for Iranian politicians. The mullahcratic regime in Iran is that very liar who has run out of self-respect. It lies as it breathes, and it breathes all too fast, panting, out of breath, as it traverses a marathon of nonstop hypocrisy. The whole world saw another example of it very recently, when Iranian Foreign Minister Hossein Amir Abdollahian said that his country had supplied a small number of UAVs to Russia a few months before the war in Ukraine after all.

You may recall that earlier Iranian Foreign Ministry spokesman Nasser Kanaani called that any claims of Tehran sending weapons, including military UAVs, to Russia for use in the war against Ukraine were untrue. In particular, this was reported by the press service of the Iranian Foreign Ministry on October 19. According to him, “such baseless claims that are made based on false information and spiteful assumptions are part of the targeted and political propaganda campaign waged by media of some countries against the Islamic Republic of Iran”.

In addition, Kanaani then stated that Iran maintained an “active neutrality” with regard to Russia’s aggression in Ukraine. “The Islamic Republic of Iran has opposed the continuation of the war from the beginning of the conflict, stressing the need for the cessation of hostilities and finding a negotiated settlement of disputes,” that statement said. And then, as everyone saw, the Iranian Foreign Minister showed up and disavowed the statement… of the very ministry he heads.

So we should not be surprised at the hypocrisy and stupidity of the Iranian lawmakers. They are a product and natural part of the mullahcratic regime, which is willing to lie and show hypocrisy non-stop. Their speeches sound particularly amoral amid reports that at least 326 people have died as a result of protests in Iran—according to CNN, citing data from the Norwegian group Iran Human Rights (IHRNGO).

The human rights activists claim that this figure represents an “absolute minimum”. According to them, it includes 43 children and 25 women. These are the consequences of the fight of the mullahcratic regime against its own people, its own citizens, including Azerbaijanis. But instead of admitting the fallacy of the chosen path, some Iranian lawmakers prefer to talk nonsense about our country, including inappropriate excursions into history and calls to “annex Nakhchivan to Iran”. All this talk proves one thing: the strengthening of Azerbaijan, its military, political and economic problems are perceived with extreme hostility in Iran, as it is plagued by chaos and exhibits all signs of possible disintegration.