Azerbaijan is no stranger to double games, intrigues and provocations of both its closest neighbours and formal allies and partners. In this sense, our country has literally gone through fire and water and has gained practical experience in solving these problems and perceives new tricky situations cold-bloodedly enough. 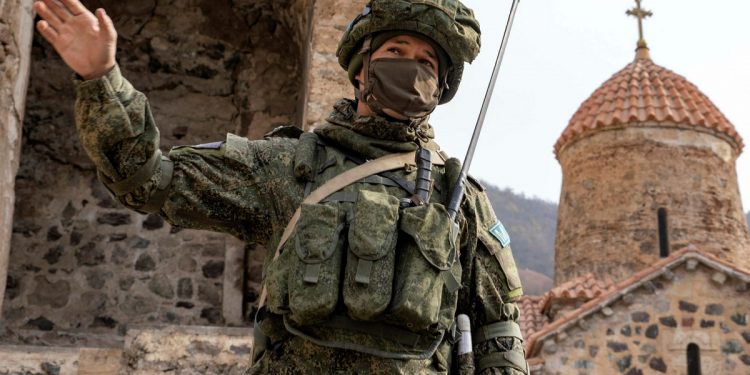 So, against the backdrop of Yerevan’s formal declarations about its desire to restart the process of peaceful dialogue with Azerbaijan, Armenia, in collaboration with Russian peacekeepers, continues to surprise us. But Baku is patient and prudent and is primarily committed to the policy of peaceful resolution of disagreements. However, if someone persistently provokes our country, we can use more effective tools, so to speak, to “force the peace”.

And our patience has been tested lately with enviable regularity, which, of course, raises a lot of questions for official Baku and Azerbaijani society. It seems that not only Armenia itself (a common phenomenon!), but the entire Russian peacekeeping contingent based in Karabakh has forgotten what reality is. Anyway, the trips to Karabakh, which is supposed to be controlled by the same Russian peacekeepers, and directly to the separatists have become more and more often. Officials from Yerevan, as well as some foreign politicians and journalists, go there to “pay their respects”. Of course, such a blatant violation of international law is followed by a corresponding reaction from Azerbaijan’s official agencies, but the fact that these illegal visits are practically facilitated by Russian peacekeepers causes justified indignation among both the authorities and the public of the country. I emphasise that it is “indignation” – it has not yet reached righteous anger… We are still trying to sort things out amicably.

The Azerbaijani Foreign Ministry very clearly expressed its attitude towards the recent trip of the Armenian prosecutor-general to our country, “to visit” the separatists, as well as a number of other similar “tours” to Karabakh the other day. As we all know, Azerbaijan does not recognise any separatist power structures in Karabakh, so such “visits” must be interpreted as blatant provocations by Yerevan.

The Azerbaijani Foreign Ministry harshly, but very diplomatically, as they say, slapped Armenia. A statement of our Foreign Ministry says that this step of Armenian Prosecutor-General Artur Davtyan taken contrary to international acts on the sovereignty, territorial integrity and inviolability of borders of any state, not only violates fundamental norms and principles of international law but also causes serious harm to normaliыation of Armenian-Azerbaijani relations in the post-conflict stage, including efforts to establish peace and security in the region. It is stressed that “the irresponsible and provocative step taken by the Armenian side once again demonstrates that this country is not sincere in its statements about its alleged commitment to normalisation, which, among other things, casts a shadow on the efforts of international mediators”. In the conclusion, the document very capaciously noted that “all responsibility for this provocative step lies with the Armenian side”.

We would like to hope that this hint is understood in Yerevan. Especially given that the ambassador for special assignments of the Armenian Foreign Ministry Edmon Marukyan and representatives of Armenian universities have recently visited the remnants of Karabakh bandits, and in the 20s of May, according to Armenian mass media, separatist leader [Araik] Haroutyunyan “received” Armenian Labour and Social Problems Minister Narek Mkrtchyan.

The question is whether the common people from Yerevan did not go too far and travel around the Azerbaijani land without the permission of official Baku? And what kind of negotiations are they holding with representatives of the separatists encouraging terrorism and banditry in Karabakh?

And, of course, the main question that I really want to clarify is how these gentlemen seep into Karabakh through the cordon of Russian peacekeepers in Lachin? The story of figures of various stripes, including even foreign officials, constantly infiltrating Azerbaijan’s Karabakh without Baku’s knowledge has long gone beyond simple collusion to the level of outright provocation. How else to explain the Russian peacekeeping contingent’s constant role as “blind” police?

Interestingly, the Russian peacekeepers themselves try to explain what is going on with the most ridiculous explanations. I remember Russian peacekeeping commanders in Lachin explaining the provocative fact of French presidential candidate Valerie Pekress’s penetration into Karabakh by saying that a French citizen was driving in a car with Armenian licence plates “and then the Russian soldiers just blundered…”  In general, these peacekeepers are naive simpletons: they appear to come straight from the village and immediately start to do their service. No training or briefing. Well, then it is clear why they were stuck in Ukraine…

But how long can we play “the fool” here in Karabakh, which our soldiers liberated with their own blood? Or maybe state officials from Yerevan who go to Karabakh with visits do not pass through Russian checkpoints in cars with state license plates, but in order to mislead the “poor” Russian military, they change to tractors or carts of Armenian peasants? We have not yet heard such nonsense from the Russian peacekeepers, but we will probably hear it again. How else can they justify their complete military failure, since there are almost no other options?

We must note that the patience of Azerbaijan is becoming less and less. On January 12, 2022, President Ilham Aliyev raised this issue in an interview with Azerbaijani TV channels, noting that such facts “must be put an end to. But it seems that this message by the Azerbaijani president didn’t fully reach the Russian peacekeepers.

Well, Azerbaijan has given another serious warning through the Foreign Ministry. And every word in it has a very clear message. And the phrase about “the responsibility for this provocative step of the Armenian side” only says that tomorrow Azerbaijan can take responsibility for any reciprocal actions, and there can be many different methods. Our military already has successful experience in solving these very problems with the Armenian gangs in the zone of responsibility of “sleeping” Russian peacekeepers on the Farrukh Ridge, as well as in other areas – here Azerbaijan’s actions have been both consistent and the most categorical, both in military and political sense. And it could be (taking into account the brilliant experience of the 44-day war) even more extensive and decisive. So much so that the Yerevan officials can sneak into Karabakh only by dressing up in the clothes of local peasants and learning the Azerbaijani language.